“Deficit Discipline” Is So Yesterday

In my two most recent blog posts, I highlighted the premise that “deficit discipline” in Washington, DC, (the Federal Reserve (Fed) included) seems to be a thing of the past. Without a doubt, the pandemic and related economic shutdowns required unprecedented fiscal action, but even before 2020, expanding U.S. budget deficits had become the norm the last few years. With fiscal year (FY) 2020 now officially in the books, let’s take a look at how things fared.

For the record, the U.S. federal government’s fiscal year ends on September 30 of a calendar year. Thus, October 1 begins the new budget cycle, so we are now officially into FY 2021. 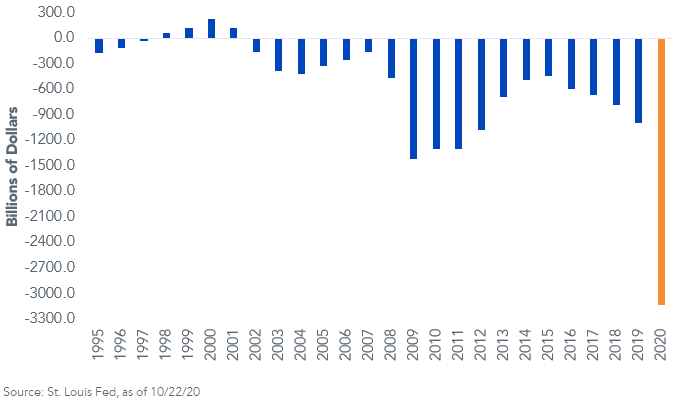 For FY 2020, the total deficit came in at $3.1 trillion, a record shortfall, especially compared to a red ink total of $984.4 billion for FY 2019. In addition, it was more than double the previous high watermark of $1.4 trillion that was printed in 2009. As you can see, in each “record-breaking” instance, extraneous factors were no doubt involved. This past year it was pandemic-related, while the 2009 experience was financial crisis/great recession-related.

So how did we get here? The table below highlights some key budget year versus year figures. First, on the revenue side of the equation total receipts were down $42.2 billion, led mostly by a decline in individual income taxes, but the corporate side came in negative territory as well.

Without much of a surprise, it was the surge in spending that accounted for 98% of the increase in the overall deficit, as total outlays exploded by more than $2.1 trillion. The three key contributors were the Departments of Health & Human Services, Labor and the Treasury, all areas of the federal government that were profoundly impacted by the pandemic response. Treasury and Labor outlays stood out the most, as each rose well in excess of $400 billion due to the CARES Act and elevated unemployment insurance. Interestingly, interest on the public debt actually dropped a bit, no doubt a result of plunging U.S. Treasury (UST) yields.

As I alluded to earlier, the rising deficit trend was already in place prior to the pandemic. Indeed, the U.S. budget shortfall had been increasing the last four fiscal years and was on track to surpass the trillion-dollar mark even before COVID-19 reared its ugly head.

Looking ahead, additional fiscal stimulus does seem likely in FY 2021: It’s the exact timing and magnitude that are unknown. With a deficit base of at least $1.0 trillion already baked into the budget, it appears as if another multi-trillion-dollar shortfall seems likely at this point.

Up until recently, the UST market has revealed little concern for the sheer amount of new supply that was needed to finance last fiscal year’s deficit. Although I wouldn’t put the burgeoning deficit at the top of my list of catalysts, early here in FY 2021, the UST 10-year yield has risen to a four-month high and broken through some technical levels of support…something to watch for sure.