Debating Stress in the Funding Markets

We discussed the outlook for stocks amid the coronavirus pandemic. Professor Siegel recently detailed why he finds equity valuations quite attractive at today’s levels.

Bianco has tracked the coronavirus spread carefully, and he is worried about confirmed cases doubling every three days in the U.S. and what measures we are taking to prevent infections from spreading further.

But the most interesting segment of the podcast debated stress levels in the funding markets.

Bianco is perplexed that the Federal Reserve (Fed) offered to provide $1.5 trillion of liquidity in the funding markets—an amount so large it is hard to comprehend—while only $42 billion was absorbed by banks. Note that $1 trillion would have added more to the Fed’s balance sheet than all of quantitative easing (QE) provided during the first QE phase of the financial crisis.

Bianco believes that regulations and newly added capital restrictions prevented banks from taking more of this funding at quite attractive financing rates. Bianco is monitoring the FRA-OIS spread1 as his key gauge for the level of stress in the bank funding market, and this spread rose significantly from 11 to 66 basis points (bps). 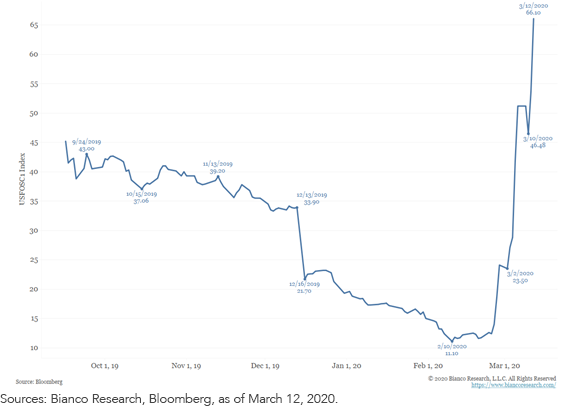 Professor Siegel countered that the LIBOR disconnected from the Fed Funds Rate by 400 bps at the peak of the Lehman Brothers crisis. Most loans at the time were based on the LIBOR, a real issue the Fed had to address, because lowering their Fed Funds Rate didn’t translate to lowering funding costs, as fears spread that banks were going bankrupt.

Siegel does not see this same issue today. We are transitioning away from LIBOR pricing of loans to a new SOFR rate, and the SOFR on Friday was 120 bps versus 110 bps for the Fed Funds Rate, which he views as a spread that is a result of markets functioning normally.

Siegel further commented that the TED spread (the difference between the interest rate on short-term U.S. government debt and the interest rate on interbank loans) was only 41 bps, while its average over the last four years was close to 35 bps, signaling a level is not extreme.

Flanagan is less focused on the 100 bps of additional rate cuts that the Fed announced Sunday night, and more on additional funding facilities that could allow banks to expand the collateral they can place with the Fed beyond Treasuries and agencies in exchange for short-term liquidity and cash.

In addition, the Fed introduced QE4, which has the Fed buying $500 billion of Treasury securities and $200 billion of mortgage-backed securities. It also lowered the “discount window” primary credit rate 150 bps to 25 bps, one step that may ease the funding stress Bianco referenced.

It was great to have a lively debate on these important issues, and I am sure we will keep coming back to this funding market question in future podcasts.

Please listen to the full conversation below.