Can Europe’s Dismal Decade Turn Around?

European stock markets are currently having their worst 10-year stretch for relative returns compared with the U.S. stock market in 40 to 50 years.1 Despite continued Brexit uncertainty weighing on sentiment, investors might want to start paying attention to European equities again.

Ever since the financial crisis, the U.S.’s role in global capital markets has become increasingly dominant, with European equities compounding returns over 600 basis points (bps) per year less than the S&P 500 Index’s returns over the most recent decade.

Anecdotally, we often hear that Europe’s inability to keep pace with the U.S. over the past decade is caused by over-weight positions in banks, which have struggled in the post-crisis environment, and the absence of firms comparable to the U.S. tech giants.

I examined this narrative by running an attribution report of the performance differential for the MSCI USA Index compared with the MSCI Europe Index over the last decade.

The attribution analysis was done in local currency terms for European markets because if it had been measured in U.S. dollars, Europe’s underperformance would have been even worse! 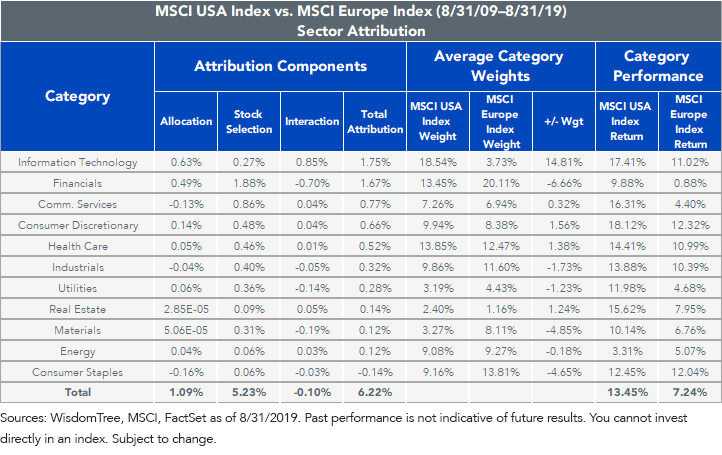 Many value-minded investors may see this raw gap in relative returns and get attracted to the potential for mean reversion.

In the 30 years prior to 1999, European markets had outperformed U.S. markets, even when measured at the peak of the U.S. tech bubble.3 So, who is to say the U.S. will always outperform looking forward?

The higher returns in the U.S. were fully supported by underlying fundamental earnings trends: European earnings contracted 23% cumulatively over the last decade while U.S. earnings grew over 40%. The average annual growth rate differentials in these earnings metrics is close to 6%, which is essentially the same difference in relative outperformance between each equity market. 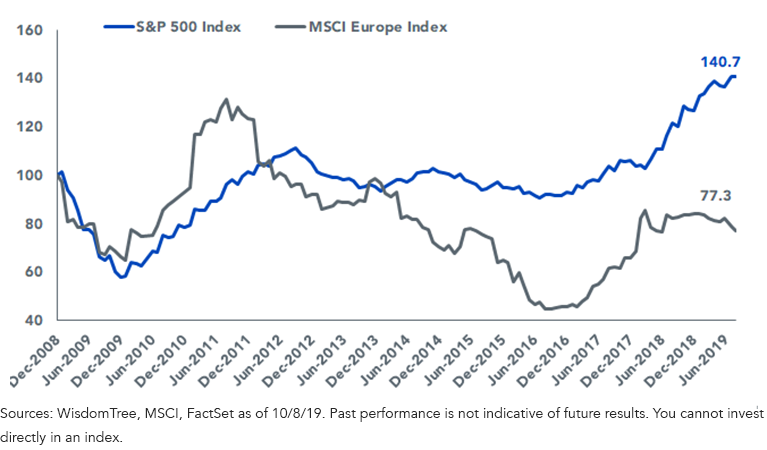 Whether European markets are destined to mean revert and outperform the U.S. boils down to expectations for relative earnings growth.

All this uncertainty makes allocations to European equity markets quite hard, but also potentially quite rewarding when the earnings outlook and sentiment inflects more positively.

The most immediate catalyst could be a resolution of global trade tensions, which has hurt China, emerging markets and ultimately Europe as well.

Further, a change in fiscal spending from countries with surpluses such as Germany could be a positive surprise that many may consider only a remote possibility today.

Unless otherwise stated, all data is from Bloomberg, WisdomTree and FactSet as of October 8, 2019.

2Please note that Amazon, Facebook and Google are not held in any of the exchange-traded funds mentioned in this post and are not eligible for inclusion, either.

Diversification does not eliminate the risk of experiencing investment losses. There are risks associated with investing, including the possible loss of principal. Foreign investing involves special risks, such as risk of loss from currency fluctuation or political or economic uncertainty. These Funds focus their investments in Europe, thereby increasing the impact of events and developments associated with the region which can adversely affect performance. Dividends are not guaranteed, and a company currently paying dividends may cease paying dividends at any time. Investments in currency involve additional special risks, such as credit risk and interest rate fluctuations. As these Funds can have a high concentration in some issuers, the Funds can be adversely impacted by changes affecting those issuers. The Funds invest in the securities included in, or representative of, its Index regardless of their investment merit and the Funds do not attempt to outperform its Index or take defensive positions in declining markets. Please read each Fund’s prospectus for specific details regarding the Fund’s risk profile.