Has Default Become the Latest Buzzword?

The discussion surrounding a possible default seems to be becoming a “hot-button” topic here early in the new year. Of course, one aspect of this conversation involves the current debt ceiling debate within the federal government, a topic we wrote about in our Minds on the Markets piece just last week. This blog post is going to focus on the other part of the default discussion: U.S. high-yield (HY) securities.

With a widely anticipated recession expected for the U.S. economy in 2023, the notion of elevated default rates occurring in the HY space has also garnered increasing attention. According to the latest data from Moody’s, the U.S. speculative-grade default rate came in at 1.68%1 for November 2022, moving very little over the prior 12-month period. This relatively steady performance followed on the heels of the rate reaching a COVID-19-related peak of just under 9% in August 2020.1

Questions have arisen as to whether the HY default rate can help foretell a potential recession. As the above graph illustrates, the results have been somewhat mixed on that front and didn’t really provide much guidance from 1970 into the early 1980s. However, in the case of the 1990–1991 and 2001 economic downturns, an ascending trend did serve as a precursor for the recessions that followed. In both instances, the HY default rate not only rose ahead of the downturn, but it also continued to increase and remain elevated—even after the recession was “officially” deemed to have ended—before resuming a downward trajectory. In fact, default rates reaching “double-digit” territory was also the norm. For the record, there was no predictive value for the financial crisis and/or great recession. Interestingly, there was a modest uptick in the rate prior to the “COVID-19 recession,” but the jury will remain “out” on this episode because we don’t know if the U.S. economy would have avoided a recession or not if there had not been a pandemic.

From what I have read, it appears as if rating agencies are expecting the U.S. speculative-grade default rate to increase this year, rising anywhere from 3.75% to 4.8%.2 As you can see, from a historical perspective, that number would definitely be on the low side, especially for the period covering the last 30 years. 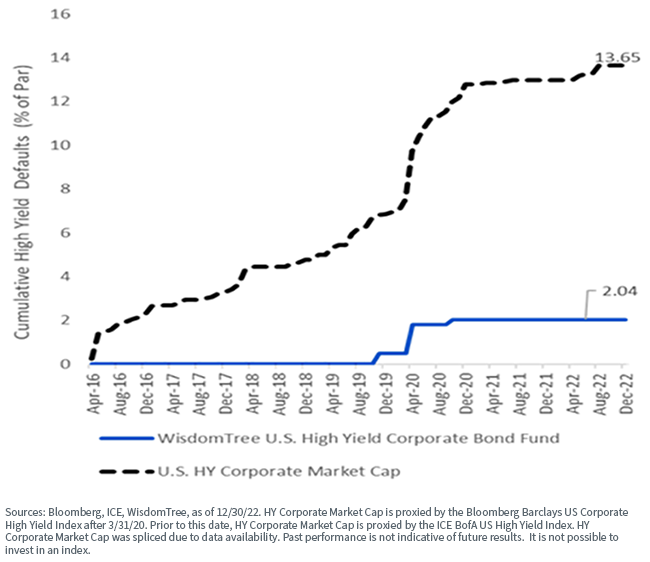 Nevertheless, with recession and potential risk-off concerns remaining a prevalent part of the investment landscape discussion, an HY solution that recognizes this factor is an important consideration for investors. The WisdomTree U.S. High Yield Corporate Bond Fund (WFHY) employs a “screen for quality” approach that focuses on only public issuers and their attendant balance sheets. We found that eliminating the public issuer universe with “negative cash flow” can serve as an important quality screen and helps to address the elevated credit risk apparent in the market cap-weighted approach, with the goal being to mitigate credit concerns—i.e., default risk—that can arise from risk-off periods (recessions). As the above graph highlights, this strategy has been rather effective, as the U.S. HY market-cap default rate has been about 13.7%, while for WFHY, it has been only 2.0% since inception.

The bottom-line message is that “there’s income back in fixed income,” but in our opinion the current market environment has made it clear that a strategy that emphasizes fundamentally sound companies with strong cash flows, such as WFHY, is prudent in a time of economic uncertainty.

For definitions of terms in the charts above, please visit the glossary.

There are risks associated with investing, including the possible loss of principal. Fixed income investments are subject to interest rate risk; their value will normally decline as interest rates rise. High-yield or “junk” bonds have lower credit ratings and involve a greater risk to principal. Fixed income investments are also subject to credit risk, the risk that the issuer of a bond will fail to pay interest and principal in a timely manner or that negative perceptions of the issuer’s ability to make such payments will cause the price of that bond to decline. While the Fund attempts to limit credit and counterparty exposure, the value of an investment in the Fund may change quickly and without warning in response to issuer or counterparty defaults and changes in the credit ratings of the Fund’s portfolio investments. Please read the Fund’s prospectus for specific details regarding the Fund’s risk profile.