After a rocky start to the year, U.S. equities were repeatedly buffeted by a series of economic headwinds. From Russia’s invasion of Ukraine to aggressive Fed rate hikes and the de facto collapse of cryptocurrencies, what little U.S. equities managed to recuperate by the end of Q1 2022 was effectively wiped out and so much more by December.

A fair share of the market’s woes were driven by the spectacular decline of growth stocks. Mega-cap growth giants suffered the most, with both Tesla Inc. (TSLA US) and Meta Platforms (META US) tumbling over 60% year to date.

Our Domestic Core Equity family of Indexes consists of the WisdomTree U.S. LargeCap, MidCap and SmallCap Indexes—all of which outperformed their respective benchmark indexes as shown below.

These earnings-weighted Indexes were designed to have high correlation to broad-based market returns while mitigating exposure to expensive growth stocks—exactly the type of stocks that have struggled in 2022. 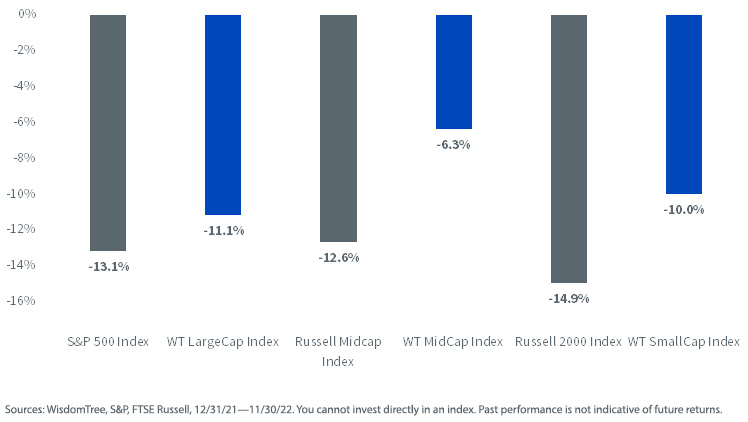 Looking at returns for the Russell large-cap, mid-cap and small-cap indexes, companies with high valuations and low (or negative) earnings vastly underperformed those with the lowest price-to-earnings (P/E) ratios. 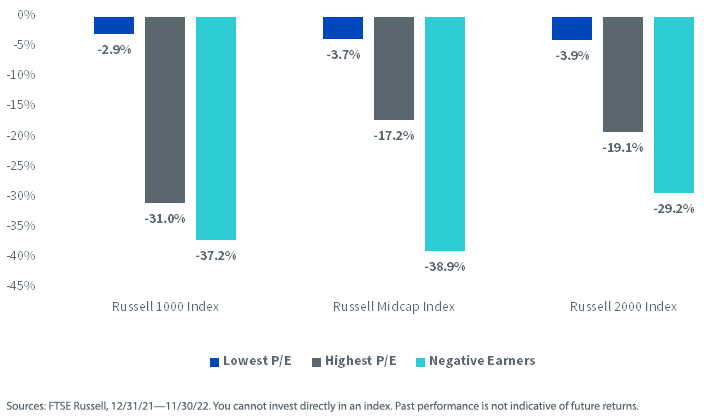 At their launch, the WisdomTree U.S. LargeCap, MidCap and SmallCap Indexes challenged the industry norm of market cap-weighting by allocating weights based on fundamental metrics such as earnings. This method of stock selection and weighting has resulted in enhanced returns and lowered P/E ratios compared to traditional market cap-weighted portfolios.

As we head into 2023, high market valuations continue to pose a major risk to investors. The market outlook for next year remains uncertain, and Street earnings estimates have been steadily lowered through the second half of this year. Utilizing a strategy that lowers multiples for large caps by over five turns, mid-caps by over 10 and small caps by over 20 could serve investors well.

This year’s rebalance saw our Domestic Core Equity Indexes further reduce their P/E ratios and improve other fundamentals as well. Notably, the WisdomTree U.S. SmallCap Index (WTSEI) improved its return on equity by almost 5% and brought its P/E ratio below 10x, at a standout discount well below historical levels. Including WTSEI, all Indexes improved their return on assets and return on equity as shown below. 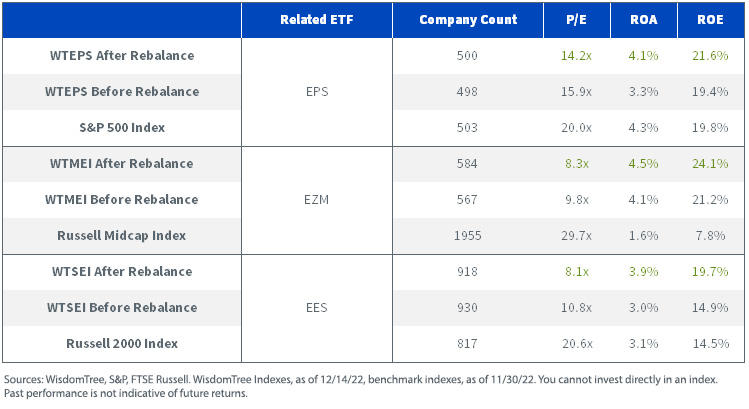 The year’s biggest winner was the Energy sector, which (measured by the S&P 500 Energy Index) trounced the broad S&P 500, delivering a whopping 71.98% of excess returns year to date, while maintaining the lowest P/E ratio of all sectors as profits kept pace with price gains.

All WisdomTree core Indexes increased allocations to the Energy sector, with the WisdomTree U.S. LargeCap Index (WTEPS) increasing its weighting by over 4%.

On the other hand, all Indexes shed weights from the Financials sector, which dropped roughly 2%. Information Technology had a more modest reduction across the Indexes. 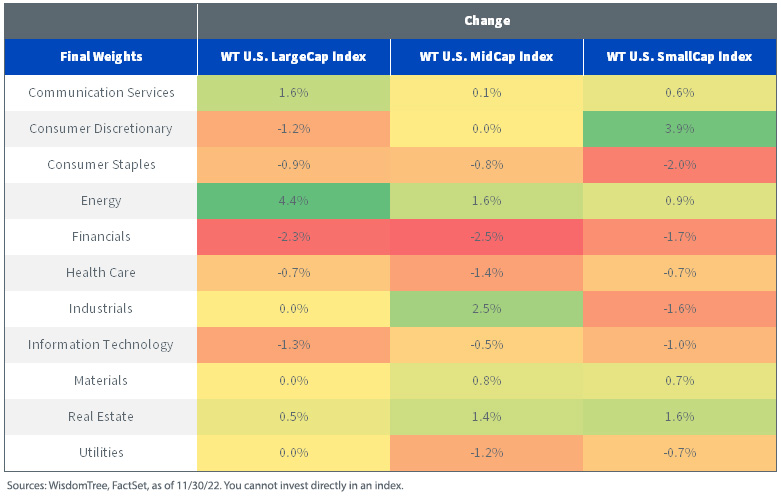 On an individual holdings basis, the WisdomTree U.S. LargeCap Index has its biggest under-weight allocations to Apple, Microsoft and Amazon. A 5% single holding cap forces Apple—the most profitable company in the U.S.—to be under-weight relative to its 6.5% weight in the S&P 500.

Exxon Mobil and Alphabet (combining its Class A and Class C shares) are the biggest over-weight holdings for the Index at around 1.3% each. 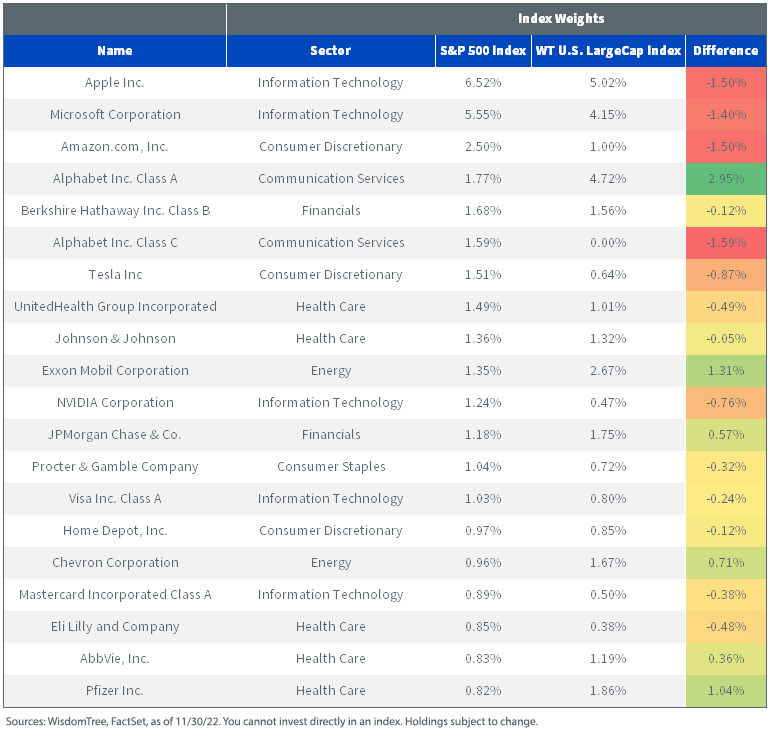 As recession fears continue to loom amidst continued rate hikes from the Fed, it is abundantly clear that the pandemic-era days of easy money are long behind us. Expensive and unprofitable stocks—the largest of which dominate the large-cap landscape—are being crushed, weighing down the market.

By emphasizing and allocating weights using fundamental metrics as opposed to the commonly accepted method of weighting by market cap, the WisdomTree Domestic Core Equity family of Indexes magnifies the effect of earnings on performance while effectively managing valuation risks.