We’ve recently highlighted the valuation opportunity in U.S. small-cap equities. Amidst ongoing market volatility, U.S. small caps continue to be priced at a significant discount to their mid- and large-cap counterparts.

It was partially this divergence in relative valuations that supported our Model Portfolio Investment Committee’s decision to increase exposure to U.S. small caps in our Strategic and Siegel WisdomTree Model Portfolios as part of the August month-end rebalance.

Looking ahead, one potential fundamental tailwind for small-cap performance could be the stronger dollar and a greater focus on domestic revenues.

The picture is very different in small caps, where the forward P/E of 11.9x on the Russell 2000 Index (a U.S. small-cap proxy) represents a greater than 30% discount to its long-term median of 17.2x.

It seems clear that fears of a near-term recession in the U.S. have had an outsized impact on the valuations of small caps relative to the broader market. While some of this repricing is likely warranted, given small caps’ historical volatility and sensitivity to economic growth, valuations relative to large caps are now less than two standard deviations below their long-term (20-year) average.

Despite relative valuations that appear extreme, a comeback for U.S. small caps may require some sort of fundamental catalyst. A broad improvement in the U.S. economic picture may be one optimistic possibility. But absent that, what else could be on the horizon?

The sharp appreciation of the U.S. dollar against international currencies has been a dominant theme for markets this year. Historically, small-cap versus large-cap performance has been mixed over longer periods of sustained USD strengthening.

However, the moves seen in EUR/USD, JPY/USD and other FX rates this year have had a significant impact on corporate earnings and forward guidance—particularly for large-cap multinationals with significant international revenues that need to be converted back to USD.

Where has this pain been most pronounced?

On aggregate, U.S. firms in the Technology, Materials and Consumer Staples sectors tend to have the largest international operations, with Utilities, Real Estate and Financials more focused domestically. 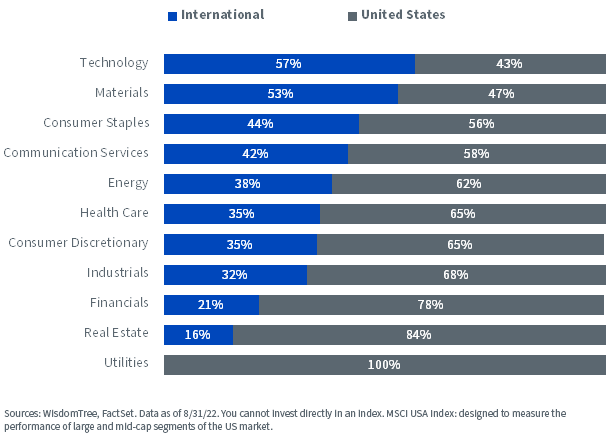 An overlooked characteristic of U.S. small caps is that compared to larger companies, they rely more heavily on domestic operations and revenues. 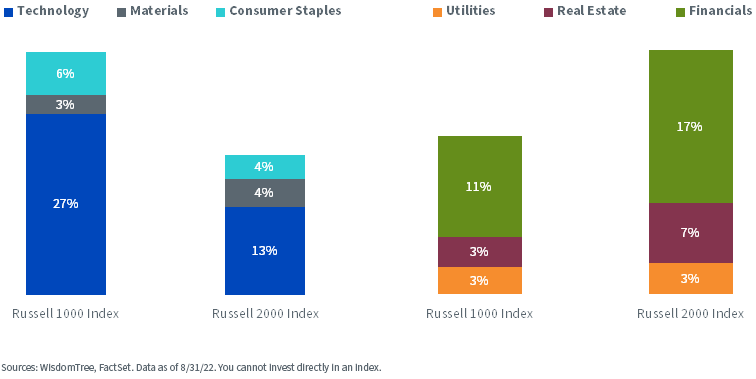 For investors seeking a level of protection from a stronger greenback and uncertainties abroad, U.S. small caps may help shield portfolios from these risks at attractive current valuations. 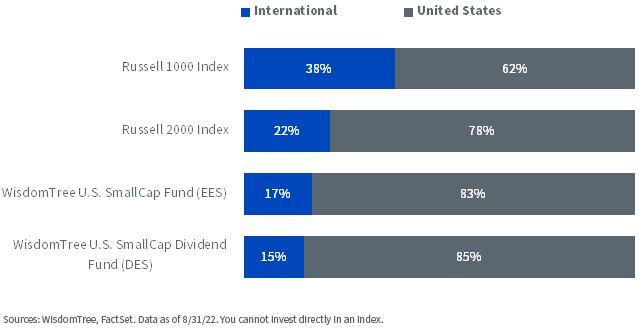 EES uses an earnings-weighted methodology to provide access to profitable small-cap U.S. equities. By constructing an Index using each company’s Earnings Stream, the strategy has an overall emphasis on quality and value factors.

On the other hand, DES takes a dividend-weighted approach that provides access to dividend-paying companies in the small-cap U.S. universe. The Fund tracks an Index that is constructed using each company’s Dividend Stream®, resulting in a tilt toward dividends, quality and value factors.

Both strategies can provide a valuable alternative or complement to traditional market cap-weighted beta. Current valuations for EES and DES offer significant discounts to the broad market and the long-term averages for each strategy.

U.S. small caps continue to be priced at a steep discount relative to larger counterparts, which we believe offers an attractive opportunity for long-term investors.

Small caps also generate a greater proportion of their revenues domestically, making them less exposed to a stronger dollar weighing on overseas earnings.

The historical track record of small caps versus large caps over longer periods of sustained dollar strengthening is mixed. However, if multinationals continue to suffer FX losses from a strengthening dollar, this fundamental characteristic could begin to play a more meaningful role in near-term relative performance.

There are risks associated with investing, including the possible loss of principal. Funds focusing their investments on certain sectors and/or smaller companies increase their vulnerability to any single economic or regulatory development. This may result in greater share price volatility. Dividends are not guaranteed, and a company currently paying dividends may cease paying dividends at any time. Please read the Fund’s prospectus for specific details regarding the Fund’s risk profile.

Andrew Okrongly
Director, Model Portfolios
Andrew Okrongly joined WisdomTree in 2022 as a Director on the Model Portfolios Team. He is responsible for the design and ongoing management of model portfolios and custom solutions for portfolio managers and advisors. Andrew is also a member of the WisdomTree Asset Allocation and Model Portfolio Investment Committees. Prior to joining WisdomTree, Andrew was a Director on the Outsourced Chief Investment Officer (OCIO) team at Commonfund, where he was responsible for macro-economic analysis and advising institutional clients on strategic and tactical asset allocation. Andrew began his career at BlackRock where he held a variety of fixed income and multi-asset investment roles. Andrew received a BBA degree from the University of Michigan and is a holder of the Chartered Financial Analyst designation.