Though the year began with struggling equity markets amid several headline risks, the geopolitical conflict between Russia and Ukraine has taken center stage. While investors have become understandably risk-off, we think an opportunity remains in European equities for those looking to weather the conflict.

Although geopolitics can’t be ignored, investors were growing increasingly bullish on European equities to begin the year, despite hawkish pivots from the European Central Bank (ECB) and inflation climbing to nearly 6% year-over-year in February.

This may seem counterintuitive when markets are frantically assessing every new development in the Russia-Ukraine crisis while evaluating the possibility of a synchronized slowdown in global growth amid restrictive monetary policy. But while the rest of the world endures these headwinds, several potential tailwinds remain intact for the European economy.

Though the pace of global growth is expected to slow from the post-pandemic economic recovery, the World Bank anticipates that euro area real GDP may grow 4.2% year-over-year in 2022, according to its January forecast. That’s slightly better than the 4.1% real growth expected for the entire world but notably higher than the 3.7% and 3.8% rates expected of the United States and advanced economies categories, respectively.

That may be related to the sector makeup of the European economy, which tilts heavily toward cyclical industries relative to other markets. 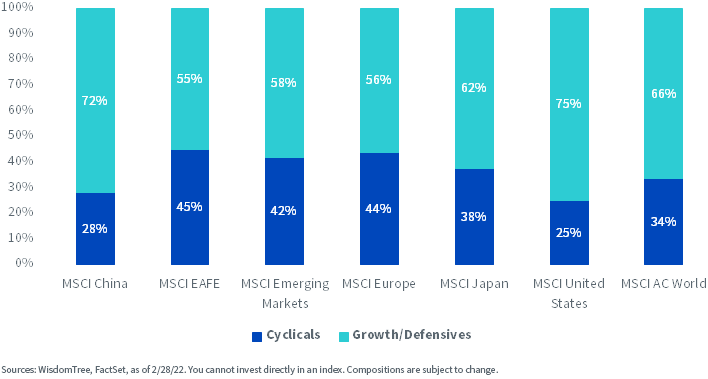 The European equity market, as represented by the MSCI Europe Index, is about 45% concentrated in cyclical sectors, comprised of Financials, Industrials, Materials and Energy, with the remainder in GICS® sectors classified as growth or defensive. This contrasts notably with the rest of the world, where the U.S. and other equity regions are more concentrated in non-cyclical industries.

Europe’s composition may therefore be beneficial for two reasons:

1. First, growth is still expected, albeit at a slower pace. A modest growth projection may indicate that certain pro-cyclical industries may account for more growth than their non-cyclical counterparts. It’s important to discern what sectors may grow rather than simply where economic growth is expected.

Consider the 16% concentration of Financials in the European economy and the nature of their business. Banks traditionally benefit from economic growth and rising interest rates because they can earn a greater spread on the interest they pay versus the interest they receive from assets.

This is where a hawkish ECB may aid the banking sector. Though mindful of the escalating conflict and its impact on European economic data, ECB President Christine Lagarde has been vocal this year about the need to temper inflation by raising interest rates without stifling the ongoing economic recovery.

She maintained the bank’s position in its March meeting, committing to taper the pandemic emergency purchase program (PEPP) and asset purchase program (APP). Bond yields have responded accordingly, climbing this year in anticipation of future rate hikes. The German 10-Year Bund yield has risen nearly 50 basis points into positive territory to begin the year in response to the bank’s hawkish stance. A regime change in the rates market may prove to be a strong tailwind for European Financials.

2. Second, the cyclical economy may be structurally insulated from inflation, which has been rising steadily above the ECB’s 2% target since summertime last year.

The larger size of Europe’s companies and Europe’s prevalent position in value-oriented, pro-cyclical sectors may position it to accept rising input costs, wages and interest rates and pass them on to consumers. This could potentially protect operating margins, as rising revenues may mitigate cost increases near the top line.

We remain bullish that European equities present a potential opportunity but acknowledge the fluidity of the Russia-Ukraine crisis as a key risk to our outlook.

We think most risks to Europe’s economy and equity market are confined to the Energy sector due to the region’s reliance on Russian oil and natural gas resources.

Despite sanctions from several global powers, Russia has yet to weaponize its resources by choking off these much-needed supplies to Europe, which may not materially impact the economy.

However, Russia certainly could use its supplies as geopolitical leverage, and Deputy Prime Minister Alexander Novak has threatened to halt flows to Europe in response to other countries’ decisions to embargo Russian oil. Should resources be curtailed, that may exacerbate inflation even further and pose the risk of a recession if these rising costs cannot be efficiently absorbed.

That may challenge the ECB, which may be confronted with the decision to either raise rates to temper inflation or remain accommodative to combat the threat of a slowdown. The impact of either decision will be highly uncertain. Thus far, the ECB has maintained its hawkish stance in support of tapering the pandemic emergency purchase and asset purchase programs, signaling that purchases may potentially end by Q3.

As of now, energy price increases may be tolerable, potentially keeping monetary policy plans on schedule. But prolonged turmoil in energy markets is forcing Europe to prepare a backup plan. As of this writing, the European Union is contemplating the joint issuance of bonds intended to blunt the impact of energy market volatility. Details, however, are vague, and the intended effects of the debt issuance may take time to materialize.

A secondary, though potentially less severe, risk is the Financials sector. The most recently available data from the Bank for International Settlements shows that European banks are exposed to about $75 billion in Russian claims, which is relatively low. The banking sector is likely healthier and better capitalized post-global financial crisis as well, potentially improving its ability to withstand imported economic weakness from Russia.

It will be important to monitor the impacts to sectors dependent on, or exposed to, Russia’s economy and its natural resources to assess the broader implications for Europe.

Despite these near-term risks, we think dedicated exposure to Europe’s cyclical economy may still be a beneficial equity allocation. One combination that may prove opportune is a blend of the WisdomTree Europe Hedged Equity Fund (HEDJ) and the WisdomTree Europe SmallCap Dividend Fund (DFE). The former can provide core exposure, while the other complements it with economically sensitive small-cap stocks.

Consider a portfolio consisting of 85% HEDJ and 15% DFE. The 15% DFE position delivers an over-weight to European small caps, which are absent from the MSCI Europe Index. 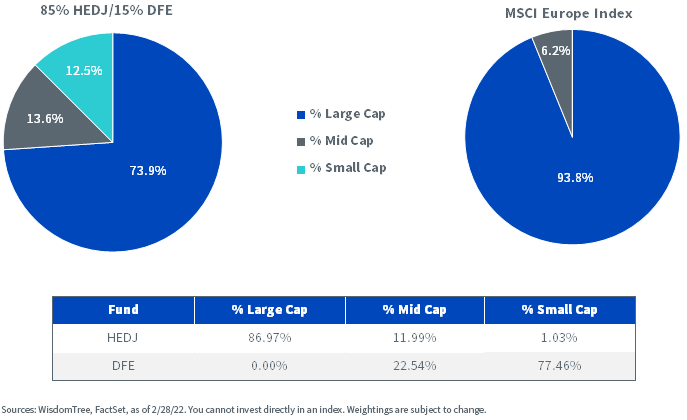 For definitions of terms in the chart above, please visit our glossary.

Sector exposures may combat risks as well. The blend provides about a net 4.5% over-weight in cyclical sectors, which could exhibit mixed performance depending on conflict outcomes due to under-weights in Financials and Energy.

However, these under-weights may be rewarded via over-weights in Industrials and Materials. They are both among the most diversified sectors by geographic revenue of the MSCI Europe Index, meaning they generate large portions of their revenue from outside Europe. This may help the blend diversify its core Europe exposure by adding a global tilt while remaining anchored by sectors more levered to the European economy, such as Utilities. 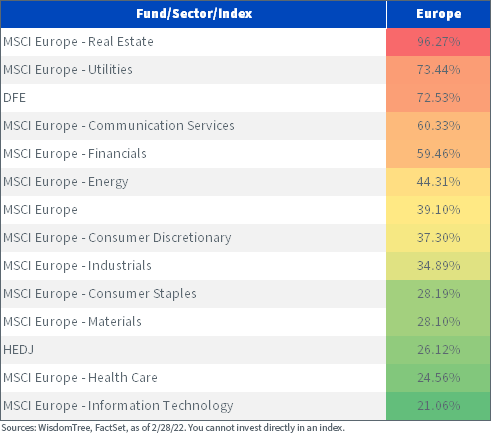 The fundamentals of this pairing are also compelling, offering the blend at lower valuations than the broader European market with a comparable dividend yield and higher-quality measurements.

For the most recent standardized performance, 30-day SEC yield and month-end performance of the Funds, please click their respective tickers: DFE, HEDJ. For definitions of terms in the chart above, please visit our glossary.

Overall, we believe this combination can be an opportunistic way to invest in Europe amid a potentially moderate growth economy, higher inflation and an ongoing cyclical recovery while being conscious of evolving risks.

This material must be preceded or accompanied by a prospectus. Please read the prospectus carefully before investing. Visit: https://www.wisdomtree.com/resource-library/prospectus-regulatory-reports.

There are risks associated with investing, including possible loss of principal. Foreign investing involves special risks, such as the risk of loss from currency fluctuation or political or economic uncertainty. Funds focusing their investments on certain sectors and/or smaller companies increase their vulnerability to any single economic or regulatory development. This may result in greater share price volatility. Investments in currency involve additional special risks, such as credit risk and interest rate fluctuations. Derivative investments can be volatile, and these investments may be less liquid than other securities and more sensitive to the effect of varied economic conditions. As HEDJ can have a high concentration in some issuers, the Fund can be adversely impacted by changes affecting those issuers. Due to the investment strategy of HEDJ, it may make higher capital gain distributions than other ETFs. Dividends are not guaranteed, and a company currently paying dividends may cease paying dividends at any time. Please read each Fund’s prospectus for specific details regarding the Fund’s risk profile.