I worry that the war on climate change may cause a pinch in the oil markets. While I can understand the concern, it may be that the speed of the push to reduce carbon dioxide emissions is laying the groundwork for a mismatch between oil supply and demand in coming years.

In late May, the International Energy Agency (IEA) released a 224-page white paper, “Net Zero by 2050: A Roadmap for the Global Energy Sector.” It is an aggressive playbook.

This exhibit really caught my eye. If the world is to cut carbon dioxide emissions to net zero by mid-century, it will require a drastic reduction in oil supply, with attendant market share gains by OPEC. 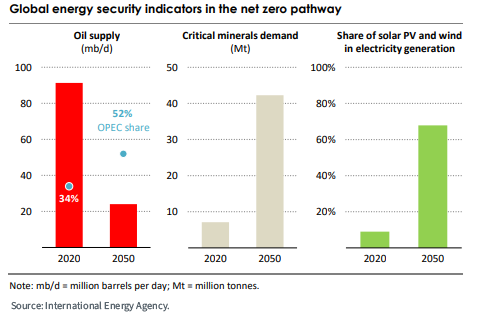 Look at the second frame. The green energy transition requires a quintupling in critical minerals demand. Such ambitions could be doable if it is a matter of setting up mining operations in Yukon or the Australian back country, where you can count on contract law and clear labor rights.

But that is not the case with many of the metals that go into electric vehicle batteries. For example, 70% of the world’s cobalt comes from the Democratic Republic of the Congo, with considerable proportions mined by hand, by children. About one-fifth of the commodity’s supply comes from such labor—before it is trafficked through back channels into nations that fall afoul of international law.

Figure 2: The Democratic Republic of the Congo Controls Global Cobalt 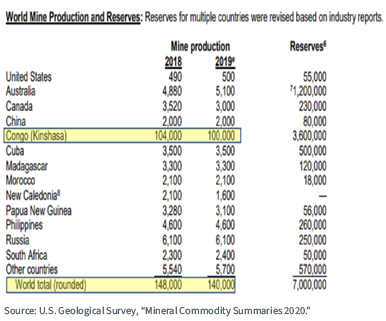 To get everyone on board, Russian President Vladimir Putin would need to willingly agree to make obsolete the lifeblood of his country’s economy. Easy to do if your country’s stock market is 3% energy stocks, as is the case in the U.S.; not so easy when the sector is 44% of the MSCI Russia Index.

Urals crude, Russia’s benchmark, has doubled from $37 a few days before the U.S. election to $74 now. As is often the case, the Russian ruble has rallied with the oil price (figure 3). 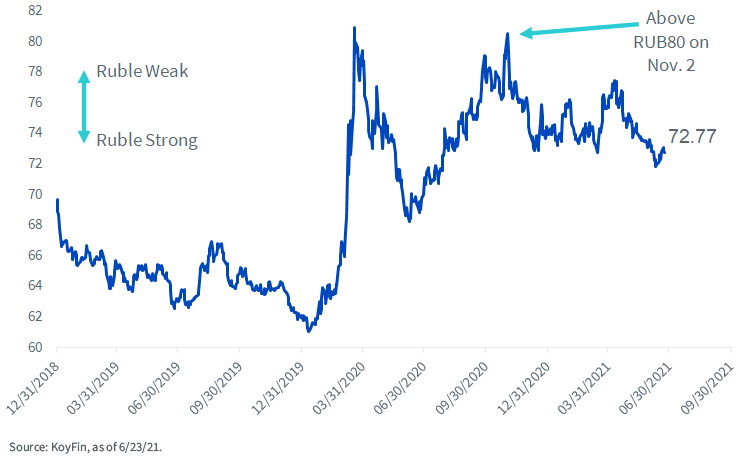 Everywhere you turn in this industry, investing by environmental, social and governance (ESG) standards is all the rage. Read a few oil company shareholder proposals for severe cutbacks in exploration, and you would think demand is collapsing.

But it is not.

The fact remains that mid-decade oil demand is going to be higher than 2019’s 100.6 million barrels per day. The IEA forecasts it will be 104.1 mb/d in 2026, with a common estimate across the Street of a few more million barrels being the daily norm around 2030.

If ExxonMobil, to name one, has its hand forced and cuts its exploration budget, the gap may be filled by petrostates such as Saudi Arabia. That is critical because, as the first chart showed, OPEC nations already control 34% of global production.

I name ExxonMobil because it offers an example of a shareholder proposal causing a business model comeuppance. A successful proxy campaign by Engine No. 1, a small activist investor with a 0.02% equity stake, managed to secure three seats on the company’s board in May. With votes from the likes of BlackRock and the California State Teachers’ Retirement System (CalSTRS), the company is being pushed to invest in alternative energy and carbon sequestration. This is a company that produces 2.3 million barrels of oil per day.

An energy major that will not be filling Exxon’s supply vacuum is Royal Dutch Shell.

That is because a judge in the Hague just ruled that the Anglo-Dutch energy major also needs to do something about climate change. The declaration: reduce greenhouse gas emissions 45% by 2030.

You imagine the C-suite at the likes of Chevron and Occidental Petroleum are also wise to the news cycle. This intentional supply destruction doesn’t end well for oil bears if demand holds up in our post-Covid-19 world.

The seeds are being planted for an oil shock down the road. Quizzically, it appears the West seems ready, willing and able to allow both OPEC and Russia to increase market share.

Oil’s last bull market lasted more than 10 years, from 1998 to 2008. This one is barely a year old. If you are wondering what happens next for inflation, it may be a good idea to consider if oil’s run may be in its early days.

ESG investment strategies limit the types and number of investment opportunities available, as a result, they may underperform other strategies that do not have an ESG focus. Companies selected for inclusion in the strategy may not exhibit positive or favorable ESG characteristics at all times and may shift into and out of favor depending on market and economic conditions.