“1” Is the Loneliest Number

First off, Happy New Year to everyone! I’m looking forward to some insightful “fixed income blogging” in 2021 and hope you are too!

Let’s get off to a fresh start and contemplate what the new year could hold for the U.S. Treasury (UST) 10-Year yield. In my opinion, the 1% threshold is where the conversation should begin. In other words, to quote the late-1960s/early-1970s band Three Dog Night (c’mon—they had tons of hits you all should know), will “one” be “the loneliest number” that leads to something potentially even higher in yield? 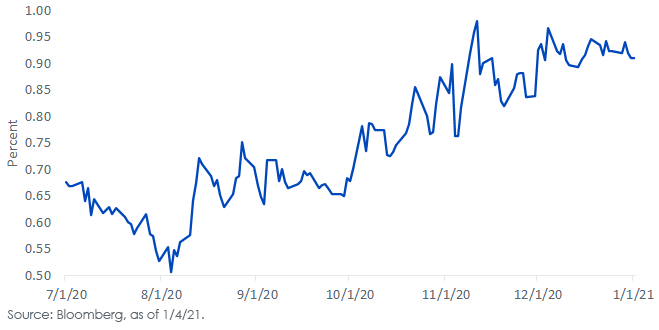 Interestingly, the graph of the UST 10-Year yield for the last six months of 2020 reveals an undeniable trend to the upside. Indeed, after posting an all-time “closing low” of 0.51% in early August, the 10-Year yield has seesawed around a bit but continues its flirtation toward the aforementioned 1% threshold. In November, it came so close at 0.98%, only to be followed by a “run” up to 0.97% in early December. In fact, with the exception of one trading session, the 10-Year yield never fell below 0.90% for the entire final month of 2020.

OK, that was last year, what about this year, you ask? Typically, when analyzing Treasury yields and where they could be headed, bond strategists such as myself focus on two key aspects: fundamental and technical analyses. Let’s take the “fundamentals” first. This aspect concentrates on what we read in the headlines: namely, economic/inflation data, the Federal Reserve (Fed), etc. You get the picture. After starting off Q4 with some momentum, the second COVID-19 wave and the attendant adverse effects began to show through some of the economic numbers, but the data has come nowhere close to the Q2 2020 negative experience, nor do we expect it to.

Without a doubt, the challenges presented by this second wave cannot be dismissed from an economic perspective, but we expect the support being provided by the Fed combined with the latest fiscal policy package should get the economy through this rough patch and back to “growth mode” by Q2 2021 at the latest. Against this backdrop, I am watching inflation expectations very closely, and guess what? They are on the rise, with the 10-year breakeven spread now at its highest reading since late 2018.

From a technical standpoint, my favorite Fibonacci analysis points toward the potential for a somewhat higher UST 10-Year yield as well. To provide perspective, after breaking through a prior retracement level, the next two stops to the upside would place the 10-Year somewhere between 1.10% and 1.30%.

Are the stars perfectly aligned for the UST 10-Year yield to move higher? I wouldn’t necessarily say “perfectly,” but the combination of unprecedented monetary and fiscal support along with the vaccination rollout (even if it’s been uneven as yet) does carry the potential for a return of the “reflation trade” and a move above that 1% threshold here in 2021, perhaps sooner rather than later.

Unless otherwise stated, all data sourced is Bloomberg, as of January 4, 2021.