Are Emerging Markets Poised for the Long Run?

It’s been a remarkable decade for the S&P 500 Index. Less so for global benchmarks.

Exhibit A: The MSCI Emerging Markets Index lagged the S&P 500 by over 200 percentage points cumulatively over the trailing 10-years—an average of more than 10% per year! 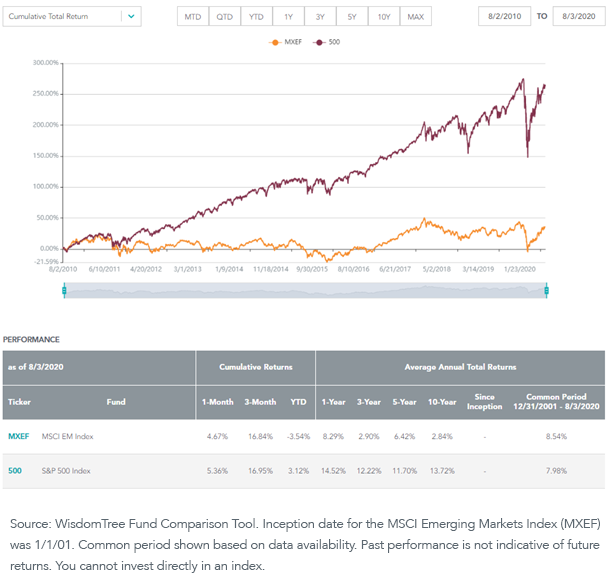 But the opposite was true in the 10 years before this period, when the emerging markets index beat the S&P 500 by a similar magnitude. Since 2001, the return of the MSCI Emerging Markets is still ahead of the S&P 500.

That is the story of diversification.

And while global allocators like WisdomTree would have given a similar story during recent years, our expectation is that this trend of U.S dominance will not continue forever.

What is One of the Best Ways to Own Emerging Markets?

One reason the U.S. has outperformed global benchmarks is its dominance in large-cap tech giants. Europe and Japan and the developed world indexes are notably lacking any big companies that have rivaled those U.S. tech stars.

In emerging markets, China is the country competing with the U.S. for tech dominance. The U.S. has FAANG, while China brings a BAT (Baidu, Alibaba and Tencent) of strong growers.

China also has up-and-coming tech stars like Pinduoduo, Bilibili and TAL Education, which are in e-commerce, online education and online entertainment, gaining share against the BAT and exhibiting strong performance.

WisdomTree has been a proponent of value investing since our inception in 2006, when we introduced dividend-weighted global portfolios.

Yet for emerging markets, many of our strategic model portfolios and core allocations are anchored with a growth-tilted core emerging markets holding—the WisdomTree Emerging Markets ex-Stated-Owned Enterprises Fund (XSOE). 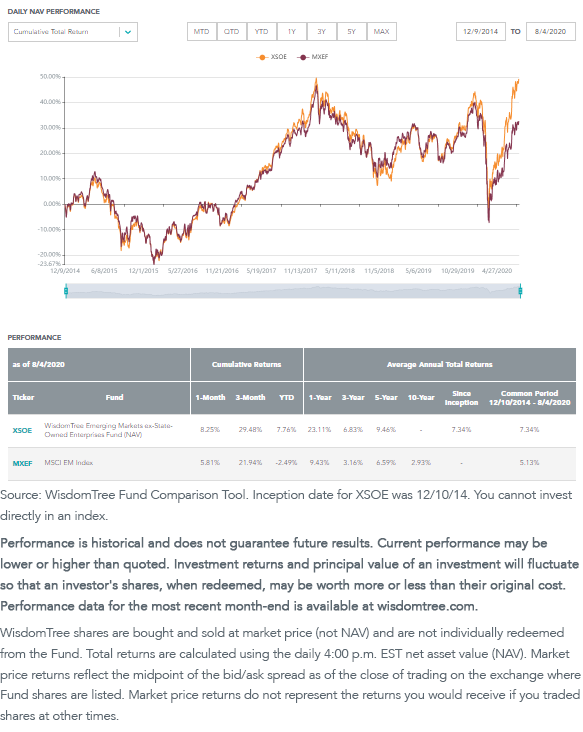 Year to date1, this growth-tilted core strategy has outperformed the MSCI Emerging Markets Index by over 1,000 basis points (bps) at NAV, bringing its since-inception performance to over 200 bps per year ahead of its benchmark.

XSOE accomplished these results by following a simple two-step process:

Let’s look at what factors have driven the Fund’s outperformance.

First, look at the returns of SOEs compared to those of non-SOEs since we launched EMXSOE. 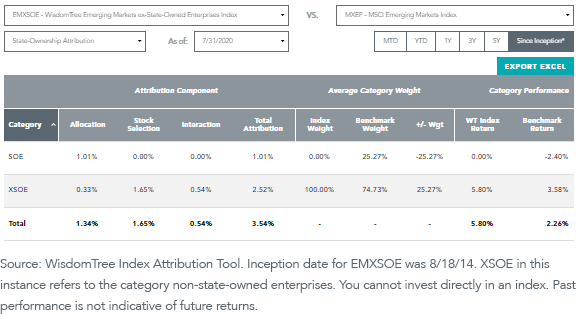 How much did the sector shift help?

As seen in the chart below, the allocation impact from sector deviations only represented 80 bps of the 354-bp total outperformance. Stock selection, and better returns within the sectors, was a key driver.

This is the impact from WisdomTree’s methodology removing SOEs, as both indexes follow a generally market capitalization-weighted approach. 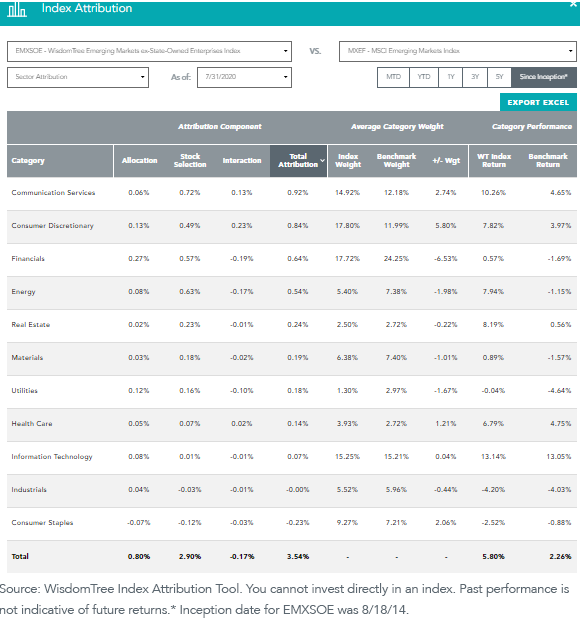 In our view the decade ahead is unlikely to see the U.S. continue its major outperformance.

Emerging markets represent one of the global growth stories we see over the long run. To capitalize on this potential, we’d advocate for a growth-tilted core like XSOE.

Diversification does not eliminate the risk of experiencing investment losses. References to specific securities and their issuers are for illustrative purposes only and are not intended to be, and should not be interpreted as, recommendations to purchase or sell such securities.