Will History Repeat Itself?

Last Friday we spoke with Ryan Detrick, Senior Market Strategist at LPL, on our Behind the Markets podcast. This was a great conversation on the macro situation and technical market dynamics around the world with historical analogies.

Time for a Retest of the Bottom?

One of the charts Detrick is watching comes from the Bank of America Global Fund Manager survey that shows fear is historically high, and there is a record amount of cash in institutional fund managers’ portfolios. 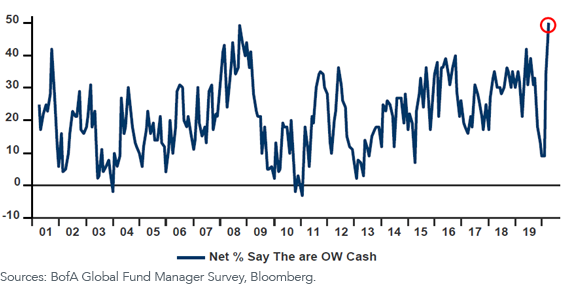 Will This Be the Shortest Recession Ever?

Detrick believes this will be the shortest recession ever, as the government caused it and will also help rectify it. A parallel to this government-inflicted recession is when Paul Volker caused a recession in the early 1980s by hiking rates to cause inflation, and it only lasted six months.

Detrick’s team is positioning portfolios in the following ways:

This was a great conversation. Please listen to the full episode below.