If the Bond Market Gets Smacked, Japanese Equities Are the Play

That’s probably what the Bloomberg Barclays U.S. Aggregate Bond Index would say if it could talk.

Aggregate bonds returned 5% annually in the 20 years through 2019. A repeat is mathematically impossible, unless interest rates plunge not only into negative territory but several percentage points deep into it, which I imagine would be virtually impossible due to the appeal of zero-yield physical cash in such a scenario. Even Swiss 30-year bond yields were stopped in their tracks at “only” -0.67%.

Something more reasonable—2%-ish bond market returns—assumes rates will not move much this decade, and that something like today’s 1.59% rate on 10-year Treasuries will maintain down the road.

And then there is the other scenario.

What will this industry do if the bond market turns disagreeable and so does the bulk of “the 60,” U.S. equities?

I think there is a hedge for rising rates, but it requires stepping out of the oh-so-common U.S.-centric holdings that populate so many portfolios. It’s Japanese equities.

With “Phase Two” of the Sino-U.S. trade deal in tow, the bond market is stepping in the direction of reflation, although the coronavirus has capped yields for now.

The 1.59% 10-year T-note yield is up a tad from 1.46% in September, but it was challenging the 2% level in the weeks before the virus grabbed attention. If the epidemiologists bring the situation under control, a case for another challenge of 2% may make the rounds.

Also, the meme in recent years was that globalization is dying and countries are turning inward. Pay no attention to the fact that Chinese exports to the U.S. are higher now than they were when Trump was elected; that doesn’t sell newspapers. For investors who want to fade the deglobalization theory, it’s not just China that stands to benefit (figure 1). 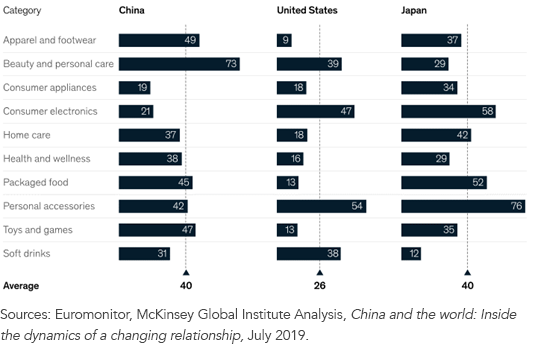 Japanese stocks have lagged the U.S. considerably this century. The 3,334 level on the S&P 500 Index marked a quintupling for U.S. stocks from the global financial crisis low. Even going back 20 years to capture that bear market and the dot-com blowup, the index has still returned more than 6%. In contrast, the MSCI Japan Index, whether in USD or in yen, is up less than 2% a year in the two decades through 2019.

What about the yen? If the spread between long and short rates widens—the yield curve steepens—it would seem hedging the yen in equity exposures is prudent (figure 2).

Figure 3 shows U.S. and Japanese equity performance during the four rising rate environments of the last five years. Japanese equities performed poorly in the time frame as a whole, really only getting any mojo in the rising rate cycles.

That could all change if bond yields turn around.

Unless otherwise stated, all data from Bloomberg, through 2/11/20