Could the Tail Wag the Dog?

When investors look for forward guidance on global interest rate trends, the U.S. Treasury (UST) market is typically viewed as the bellwether arena. While we certainly agree with this premise, every once in a while, Treasury yields can take their cue from an overseas sovereign debt, such as German bunds. Based on recent trends in the bund market, I got to wondering, could the “tail wag the dog” in the months ahead?

While there haven’t been any fireworks thus far to begin the new year, both the UST and bund markets have seen their respective 10-year yields move in a decidedly upward trajectory since late summer. From their low watermarks, the UST and 10-year bund yields have risen by about 35 basis points (bps) and 50 bps, respectively. No doubt, a shift in sentiment has been behind the increases as some of the worst-case scenarios that were being discounted five months or so ago (recession, escalating trade wars, etc.) have not come to fruition.
UST 10-Year vs. 10-Year German Bund 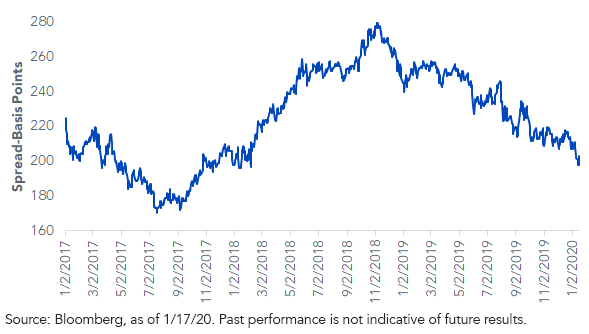 Let’s get back to German bund yields. The 10-year bund recorded an all-time low of -0.71% in early September, and in the opening days and weeks of January has made a move toward zero. To provide perspective, just last week, this yield came in at -0.16%, the closest to the zero threshold since May 2019. For the record, the 10-year bund yield started straddling the zero threshold as early as March of last year.

While German and broader eurozone economic data still leave a lot to be desired, there seems to be a growing sense that a bottom may have been reached. In addition, from a technical perspective, the 10-year bund yield has broken through some noted Fibonacci retracement levels. In fact, the five-year analysis places the next level at -0.055%, and if this reading is breached, the 50% retracement of +0.157% is next in line.

Although both U.S. and German 10-year yields have been on the this ascending trajectory, the pace has been uneven. In fact, the spread between these two instruments has been on a steady narrowing trend for over a year now. After registering the high point of +280 bps on November 6, 2018, the yield differential declined last week to +198 bps, the first sub-200 reading in almost two years. Why might this be important? Well, if you subscribe to the theory that negative yields abroad have been helping to keep UST yields down, then wouldn’t the opposite be true as well?

If German 10-year bund yields do go into positive territory, one factor that may have been suppressing the UST 10-year yield will have been removed. Certainly, a lot of factors go into the overall equation when determining the outlook for Treasury rates, but keeping an eye on the German bund market seems like a good idea over the next few weeks or months.

Unless otherwise stated, data source is Bloomberg, as of January 17, 2020.