The S&P 500 Index has been struggling at the 3,000 level for months. After piercing that psychological number to the upside and then stumbling in May, U.S. equities seemed unstoppable back in the summer—in June and July—when the market was up 7.1% and 1.4%, respectively. Value Stocks in Bulls and Bears

When did Value struggle during this time?

In figure 2, green and red ink denote outperformance or underperformance relative to the S&P 500. WisdomTree’s dividend-oriented methodologies had disappointing runs in the bullish environments. What gives is that we had better experiences during the rough patches. Figure 3 shows all of the S&P 500’s significant declines since we launched our ETF business 13 years ago. I also added 2019’s two small retracements for the reader’s edification.

It seems the Russell and S&P Value methodologies couldn’t hold up when the going got tough. 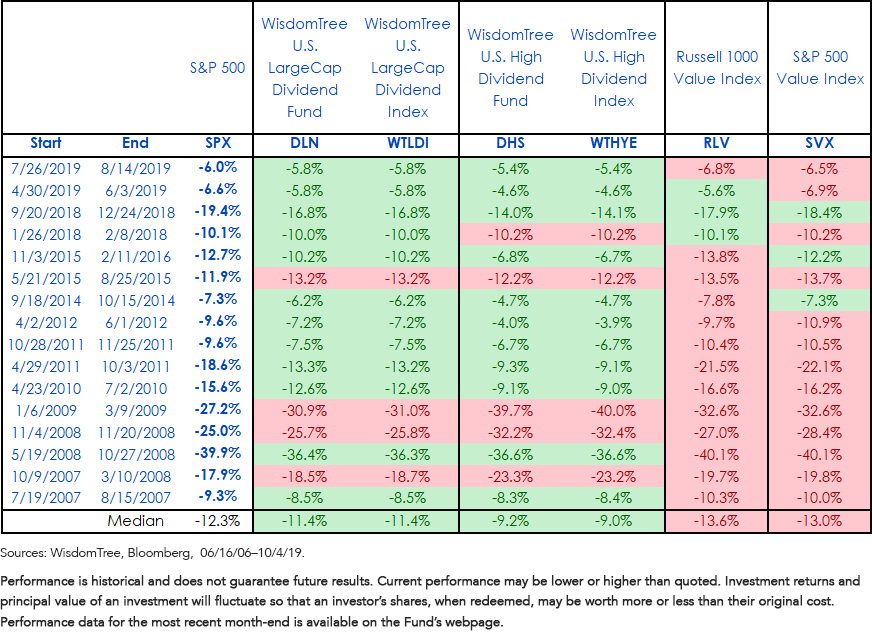 Nothing is foolproof, and this is no secret sauce—note the 2008 and 2009 red ink, when our Funds still underperformed the banks because they hadn’t yet slashed their dividends.

But we have nearly a generation of history to go by, and the declines have been favorable periods to be in dividend-weighting. Of the 16 declines for the S&P 500, DLN had a better experience in 12 of them, while DHS outperformed in 11. Critically, this happened even though Value stocks, as defined by Russell and S&P, were dying on the vine. The red ink on the right of the exhibit attests to that.

So has Value been a drawdown mitigator or aggravator? It depends on how you define it.

Unless otherwise stated, data source is Bloomberg, as of 10/4/19.

* As of 10/11/2019 Overall ratings Morningstar Ratings are based on risk adjusted returns and is a weighted average of its applicable 3, 5, and 10 year rating’s, out of 1,086 funds in the Large Value Category.