Central banks have dominated the global investing narrative recently, from the European Central Bank (ECB) and its multi-pronged stimulus program to the U.S. Federal Reserve (Fed) cutting interest rates (though perhaps not as fast as the market would like).

The Bank of Japan (BOJ) chose not to take any further policy action at its September meeting, but opened the door to more stimulus measures in October. Many are worried about whether Japan can exit from its program involving equity ETF purchases, creating a cloud of uncertainty over the markets. We believe these ETFs will remain on the BOJ balance sheet for a long time and think those who worry might be missing a bigger picture.

We believe focusing on central banks, and the BOJ in particular, causes investors to gloss over one of the world’s best value stories at a time when corporate Japan is experiencing better corporate governance and increased capital returns to shareholders.

We all worry about the “Japanification” of the global economy—the risk of a world where interest rates stay low for decades while economic growth sputters.

A more interesting story to me is the “Americanization” of Japan’s economy, with corporate Japan increasing dividends and buybacks to levels higher than we see in U.S. indexes such as the S&P 500.

Japan was known for years as a low dividend-yielding country, but this dynamic is shifting.

If you look at the history of the WisdomTree Japan Hedged Equity Fund (DXJ) since it launched in 2006, it always had a lower dividend yield than the MSCI EAFE Index (MXEA), which is a proxy for developed equity markets.

That gap narrowed as valuations became less expensive, and now in 2019 for first time since inception, DXJ has a higher dividend yield than the MSCI EAFE.

This is a major change in the relative attractiveness of Japan stocks. 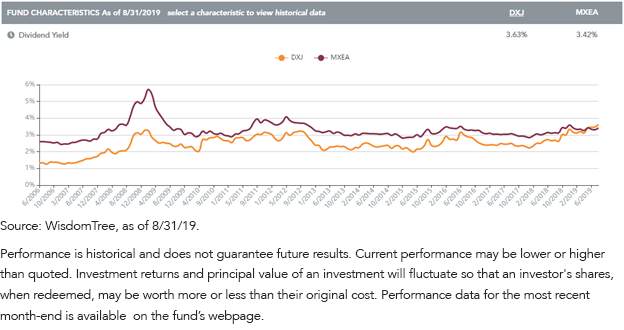 But companies are not just returning cash to shareholders via dividends. Buybacks have been on the rise, and Japan now has the highest buyback yield in the developed world outside the U.S.

Whereas investors worry U.S. companies will cease to repurchase their own shares in the market when prices go down, Japanese companies are doing the opposite, increasing their repurchases as stock prices fall.

This value gap is widening on a price-to-earnings (P/E) basis as well.

DXJ now is four P/E multiple points below the MSCI EAFE, whereas when it launched it 2006, it was offered at a premium.

A focus on capital returns and profitability levels is also enhancing quality metrics.

Bloated balance sheets often resulted in Japanese companies displaying return on equity (ROE) metrics much lower than the rest of the world, but this gap is closing quite fast.

Is There Even More Room to Run?

Many say Japan is a value trap.

One catalyst that could get Japan turning higher is positive stimulus from China, as DXJ certainly remains tied to the global business cycle and slowdowns in China. With trade wars and the global growth slowdown still a major headwind, Chinese stimulus could have a ripple effect in Japan.

But if you’re looking for one of the world’s most depressed valuations with stocks positioned for a better global growth environment, we believe there are currently few places with multiples this attractive.

The combined dividend and buyback yields of DXJ have been higher in 2019 than they were during the depths of the global financial crisis in 2009.

Few markets are priced at their 2009 market lows today, and we think this represents an opportunity for value-minded investors worried about extended valuations after a 10-year bull market in the U.S.

There are risks associated with investing, including the possible loss of principal. Foreign investing involves special risks, such as risk of loss from currency fluctuation or political or economic uncertainty. The Fund focuses its investments in Japan, thereby increasing the impact of events and developments in Japan that can adversely affect performance. Investments in currency involve additional special risks, such as credit risk, interest rate fluctuations, derivative investments which can be volatile and may be less liquid than other securities, and more sensitive to the effect of varied economic conditions. As this Fund can have a high concentration in some issuers, the Fund can be adversely impacted by changes affecting those issuers. Due to the investment strategy of this Fund it may make higher capital gain distributions than other ETFs. Please read the Fund’s prospectus for specific details regarding the Fund’s risk profile.