Take Your Currency Bets off the Table

The U.S. dollar is one of the most hotly debated questions right now. It’s a macroeconomic factor that impacts returns of many asset classes, from emerging markets to U.S. large-cap multinationals.

The standard narrative goes like this: the dollar cannot continue its gains from 2018 because the Federal Reserve (Fed) is done hiking interest rates. We’ve had a maximum divergence in rate differentials, with U.S. investors being paid over 3% per year in carry just to neutralize FX from their equity investments by hedging currencies.

Perhaps without realizing it, U.S. investors are consistently biased toward a weak-dollar worldview, as they traditionally layer weak-dollar bets on top of their international equities. Perhaps some just want to believe the dollar is going to decline forever.

I’m more cautious about predicting a perpetual decline in the dollar. I believe most people should have far less conviction in their inherent currency directional bias in unhedged portfolios.

To me, being truly FX-neutral implies taking no currency bet at all—that is, being fully currency-hedged.

The timing decision involved in switching to a more hedged baseline is always what inspires these conversations with clients.

Most fear they’ll get the timing wrong in going currency-neutral, concerned that if now is the time the dollar is going to decline again, they’ll miss out on the gains.

Our dynamic directional models point to a stronger dollar environment, based on the high carry and momentum of the dollar. We admit the dollar is not cheap on a valuation and purchasing-power parity basis, but other macroeconomic factors point toward subsequent dollar strength. Perhaps now is a good time for a fresh look.

One piece of supporting research for a stronger dollar comes from Danielle Di Martino Booth, an economist I met two years ago at Camp Kotok at Leen’s Lodge in Maine.

DiMartino Booth generously agreed to sharing her research piece on our blog post. The macroeconomic data shows there may be pressure on the dollar to move higher, and supports a fresh look at becoming more neutral on weak-dollar currency bets in unhedged international strategies.

The Daily Feather also notes the impact that a strong dollar can have on U.S. multinationals and that might help provide motivation to diversify globally, away from the U.S., on a currency-hedged basis. 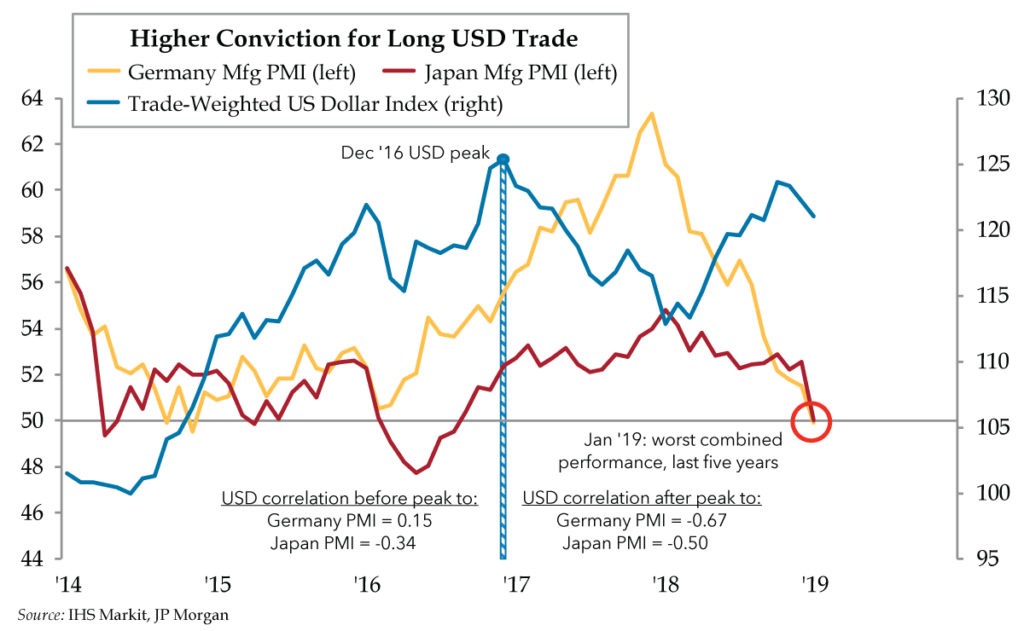 Commentary from The Daily Feather

In December 2010, Erskine Bowles, co-chair of the National Commission on Fiscal Responsibility and Reform, was prompted to address his acute distress as it pertained to our fine nation’s fiscal standing. If, one naturally inquisitive reporter inquired, our country’s fiscal finances were in such dire straits, why were we not paying through the nose in the form of higher interest rates on our U.S. Treasury bonds?

Nary missing a beat, Bowles replied, “That’s because we’re the best-looking horse in the glue factory.” Lest you be judged for forgetting your modern-day history, Bowles’ quick quip referred to a world in which Ireland and Greece had gone over the fiscal cliff and Portugal, Spain and Italy were feared to be next.

Thank goodness so much has changed?

A decade on, central banks and sovereign governments are still vying to depreciate their exchange rates. It remains the ultimate aim in the proverbial, dare we say, perennial, “race to the bottom.”

The background basics:  In any unexpected global slowdown, investors force currencies lower in the weakest locales. This works to the benefit of central banks with limited firepower in combating downside risks. Any big central banks come to mind? Did we just hear you say the Bank of Japan (BoJ) and the European Central Bank (ECB)? Fancy that.

But what if both a trade war and an unexpected global slowdown happen at the same time? The want and need to depreciate fuse into one in the blink of an eye. Given how quickly the outlook has deteriorated, both the BoJ and ECB are on a heightened state of alert.

The combustible catalyst was [the] worst combined performance in at least five years for the manufacturing purchasing managers’ indexes (PMIs) of Japan (50.0) and Germany (49.9). These excerpts from the IHS Markit reports speak to the risk of the downturns persisting:

As if the data needed the emphasis of punctuation, the BoJ added that the “…downside risks concerning overseas economies are likely to be heightening recently, and it also is necessary to pay close attention to their impact on firms’ and households’ sentiment in Japan.”

To not be out-doured, the ECB chimed in with: “The persistence of uncertainties in particular relating to geopolitical factors and the threat of protectionism is weighing on economic sentiment…The risks surrounding the euro area growth outlook have moved to the downside….”

Not to beat a very dead horse, but negative interest rates in Japan and Europe were supposed to have generated virtuous outcomes. They were, by design, destined to force financial markets players to deign to the will of the all-powerful central banks anchoring rates. The catch is the natural forces the will of central banks inhibit. Free-floating exchange rates act as automatic stabilizers.

In its January Global Fund Manager Survey, Bank of America ML informed us that the most crowded trade was long U.S. dollar. Guess what? This trade will now get more crowded, given manufacturing has hit a wall in both Japan and Germany. Our handy pictorial, above, reveals a relatively high negative correlation between both the Japan and German PMIs and the trade-weighted U.S. dollar, since the December 2016 peak.

Why care? A stronger U.S. dollar will also reinforce downside risks to U.S. multinational earnings due to translation effects. You’d be best served reviewing your portfolio. If your “safe” positions meet this criteria, you might want to consider reducing the foreign exchange risk you hadn’t realized you have.