While the ‘are we or aren’t we?’ recession debate continues (we are, technically), don’t tell that to the U.S. labor market. For the second month in a row, the Employment Situation Report revealed not only resiliency, but a surprisingly solid showing as well. As a result, investors are still left with a confusing economic backdrop for their decision-making process.

So, let’s put this latest jobs report into some perspective. Total nonfarm payrolls rose by 528,000 in July, more than doubling the consensus forecast of a 250,000 increase. In addition, the job gains were widespread in both the goods and services sector of the economy. Perhaps the most noteworthy aspect of the labor market data was that the level of nonfarm payrolls has now finally moved back to (actually slightly above) its pre-pandemic, February 2020, level. This feat took almost 2.5 years to accomplish. 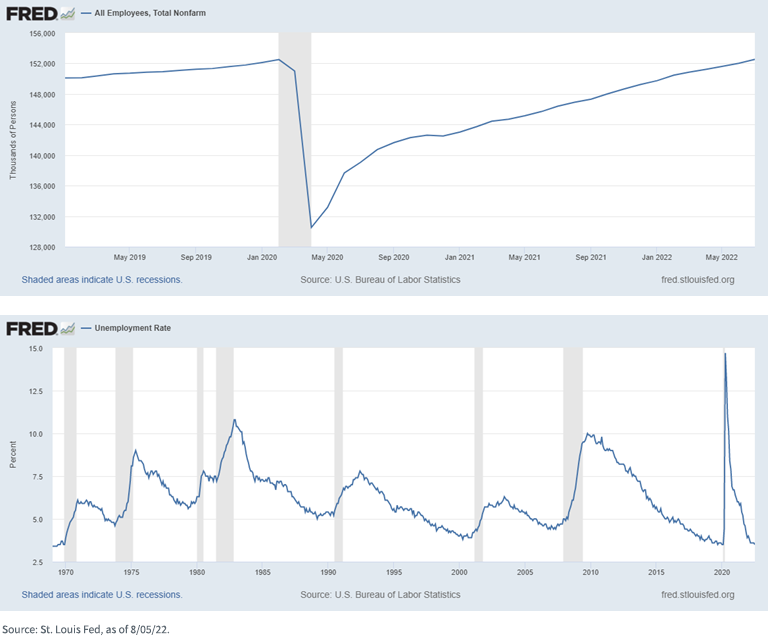 What about the unemployment rate, you may ask? The jobless rate fell 0.1pp to 3.5%, also matching its pre-pandemic level. In fact, you have to go back to 1969 to find a lower reading! For the record, wages remained firm as well, with average hourly earnings posting an annualized increase of 5.2%. This measure has now risen at an annual rate of over 5% in nine out of the last ten months.

In recent Fed comments, policy officials continued to push back against the recession narrative, and there is little doubt this jobs report will give the Fed further confidence to raise rates for the remainder of this year. In my opinion, a reasonable scenario would involve an additional 100 basis points (bps) increase for the Fed Funds Rate as the starting point between now and year-end.

However, it is 2023 that has now become the center of the monetary policy debate. Notwithstanding the solid labor market data, the money and bond markets are still discounting the possibility of rate cuts next year. This has been another area of push back from Fed officials lately. Keep in mind, it’s August, so look out for Chairman Jerome Powell at the annual Jackson Hole conference slated for August 25–27. Fed chairs have used this venue to make comments on monetary policy in the past, and given the fact there is no FOMC meeting until September 21, it should come as no surprise if Powell uses the platform for this purpose once again.

Needless to say, the UST market sold off in a visible fashion in response to the strong jobs report. As we’ve discussed often, and continue to emphasize, volatility is elevated in the bond market. After dropping to about 2.50% early last week, the UST 10-Year yield retraced a whopping 30 bps back to over 2.80% following the report. Our credo remains: don’t chase duration…

+ Is It Just a Matter of How Shallow or Deep?