How to Think Geopolitics in Investment

The importance of geopolitics in the investing world has become more apparent lately, particularly after Russia’s invasion of Ukraine.

There are generally two kinds of geopolitical events that impact equity markets. One does not fundamentally challenge the U.S.-dominated economic system, while the other fuels the potential rise of a multi-polar world.

Many investment shops attempt to quantify the investment impact of the first kind of geopolitical events. Blackrock studied 68 geopolitical risk events since 1962, such as the Vietnam War, Brexit and September 11. It found the market response to be relatively modest and short-lived. Many other investment managers found similar results. This isn’t surprising—many geopolitical events impacted sentiment at the moment and reduced equity returns, but did not fundamentally change the global economic system.

The second kind of geopolitical risk, with the potential to lead to a multi-polar world, may impact the U.S. The premium that comes with the dollar as a reserve currency or risk premia associated with demand for safe U.S. assets could potentially change.

After the 2016 presidential election, trade wars and sanctions made it clear that the U.S. is going to seriously engage with China on many levels of competition. COVID-19 and the Russian invasion appear to have fundamentally changed the U.S. public’s view of China, and solidified a view of China as a major economic competitor to the U.S.

Our podcast guest, Louis-Vincent Gave, founder of investment advisory firm Gavekal, spoke of this big-power geopolitics sentiment before many people realized the changes were coming.

In a book written before the pandemic, Clash of Empires: Currencies and Power in a Multipolar World, he laid out the potential rise of China’s currency and the Asian monetary zone. In the more recent Avoiding the Punch: Investing in Uncertain times, he showed a way to build a portfolio at a time of rising geopolitical strife.

In our conversation, Louis mentioned his believe that developed market bonds are unlikely to enjoy stellar performance in the future. He thinks emerging markets debt, precious metals, energy and consumer staples are substitutes.

He also believes energy will continue as a central element of an economy’s growth. Whoever can secure cheap energy, whether China’s use of coal or the U.S.’s abundance of shale gas, will likely lead globally. And on this matter, Europe must make a tough choice to reduce ESG goals and re-start domestic energy production, with coal or nuclear.

Louis also laid out arguments that China’s Taiwan risk is contained for now, which I also agree with.

After our podcast was published, China’s banking problems made the news as some households threatened to stop paying mortgages. For these time-sensitive topics, I’ve written tweet threads to help quickly assess the situations, and believe the fear of financial crisis is overblown. I think that understanding China better could help the U.S. compete better.

In my opinion, the current discourse that the U.S. is in decline is simplistic and overly pessimistic. I believe it means the U.S. will face high volatility. The U.S. is more flexible than China in dealing with challenges. The dollar’s status as a reserve currency will continue for decades even in a multi-polar world.

But U.S. optimism does mean many Americans need to be willing not to pander to popular sentiment and work toward meeting future challenges. Simple optimism without actions to preserve what’s best in the U.S. is not enough. 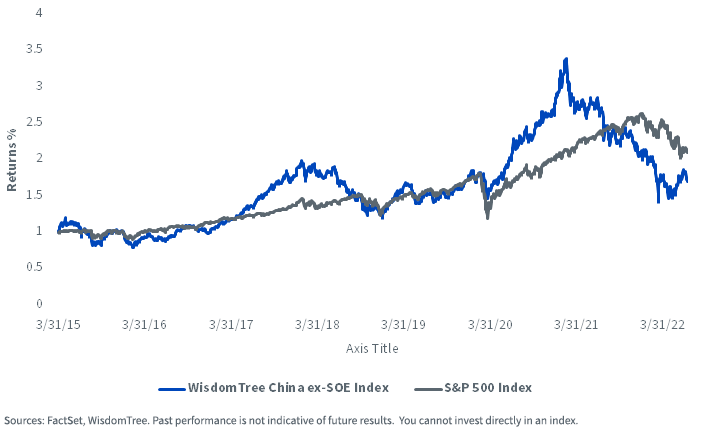 For definitions of indexes in the chart, please visit the glossary.

For more on this topic, please listen to our latest China of Tomorrow podcast below.