In last month’s dividend update, we highlighted the historic outperformance of S&P 500 dividend payers versus non-payers in January.

That outperformance has continued in February. And it’s been a global phenomenon, as seen by the performance of the WisdomTree U.S., EAFE, Emerging and Global High Dividend Funds.

This positive backdrop for dividend payers has caught investors’ attention. More than $14 billion has flown into dividend-focused ETFs in the first two months of the year, compared to less than $2 billion over the same period in 2021.1

With that said, one of the common narratives we have heard in recent years is that dividends have become overshadowed by buybacks as the preferred form of distributions, and perhaps we have seen a regime change where dividends are less relevant.

Let’s lay out some facts about buybacks and dividends across time and markets.

Buybacks Are Important—But Not Everywhere All the Time

In the mid-90s, virtually 100% of S&P 500 payouts came from dividends. Since the early 2000s, buybacks have dramatically increased, particularly for tech and tech-enabled businesses. In recent years, payouts have been roughly split between the two sources.

Share buybacks are significantly more pro-cyclical and volatile than dividends, as we can see below in comparing the dark blue and light blue lines. In the financial crisis, dividends were reduced by nearly 30%, but share buybacks went negative as companies were forced to halt buybacks and aggressively issue shares to raise capital, highlighting the discretionary nature of buybacks versus more stable dividend payouts.

This distinction was further reinforced in the past several years. The Tax Cuts and Jobs Act of 2017 resulted in a spree of buybacks in 2018 that tapered off in 2019 and then plunged amid the COVID-19 pandemic. Meanwhile, dividend payouts hardly budged.

While the increased use of share buybacks for payouts is a global phenomenon, it is much more prevalent in large-cap U.S. equities than in international markets. For the MSCI EAFE Index, two-thirds of shareholder distributions come from dividends.

Of the largest U.S. companies (Russell Top 200), 75% of the market cap is companies with a regular cash dividend. While a low percentage relative to history, that weight has increased in recent months with the relative outperformance of dividend payers and the resumption of dividends from 2020’s COVID-19-induced dividend suspensions.

In the small-cap universe (Russell 2000), just under half (46%) pay a dividend. Again, it’s a small number relative to history, and it has been dramatically increasing in recent months as speculative, non-dividend-paying small caps have plummeted. 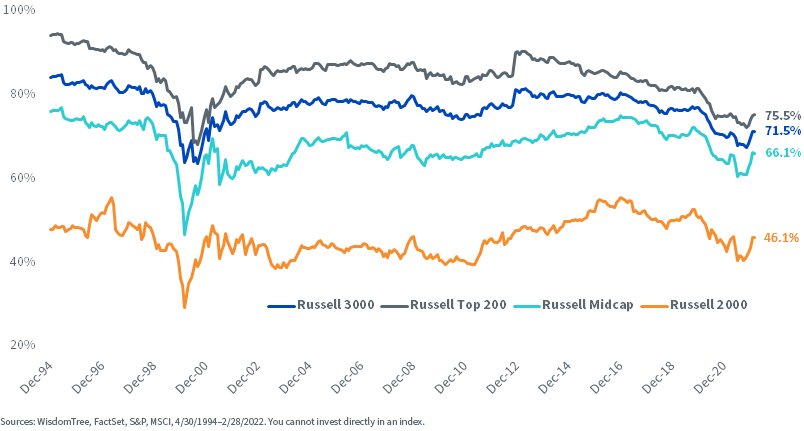 For the MSCI EAFE Index, an overwhelming proportion of its constituents (about 95%) pay a dividend. For the Small-Cap Index, 90% were paying a dividend prior to the COVID-19 pandemic, a number that was at 81% as of February 28, 2022.

While buybacks are a prominent source of payouts for large-cap U.S. companies, they are a negligible source of return for the MSCI EAFE universe, and U.S. and EAFE small caps are net share issuers. That means, outside of large-cap U.S., dividends are virtually the only form of distribution to be systematically targeted by broad-based quantitative investment strategies. 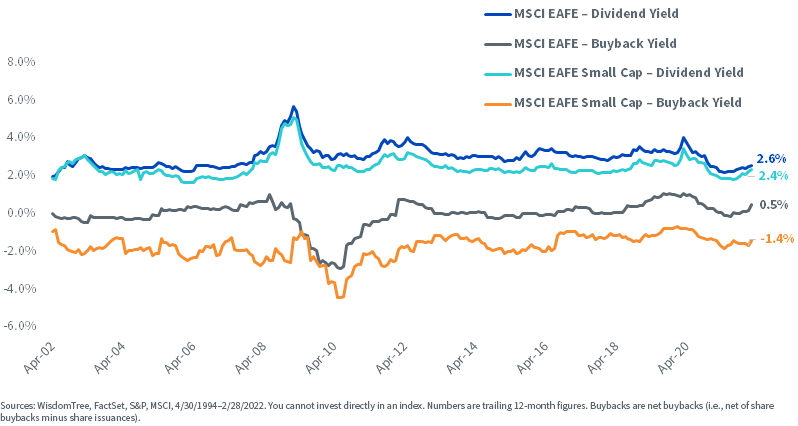 Dividends and Buybacks – Hand in Hand

Approximately $1.1 trillion in dividends and share buybacks has been paid over the past 12 months from S&P 500 companies. Buybacks were more concentrated among the largest repurchasers, as 63% of all net buybacks came from the 25 largest versus just 42% of all dividends from the largest dividend payers.

Seven of the top 25 largest dividend payers are also in the top 25 of share repurchasers (Microsoft, Apple, JPMorgan, Procter & Gamble, Home Depot, Bank of America, Walmart), highlighting how dividends and buybacks can go hand in hand.

A few notes on sector-level payouts:

It is a false narrative, or merely an exaggerated one, to say that dividends have lost their luster—for investors or executives.

Consider this excerpt from Lights Out, a book chronicling the fall of General Electric, about GE’s decision to maintain its dividend in the wake of the financial crisis:

“Given its distressed state and reliance on government help, GE needed to preserve cash, and the first step was cutting the dividend. But that was absolutely unthinkable to [CEO Jeff] Immelt.

It had been more than seventy years since GE last cut its dividend. For Immelt, maintaining that track record was a sacred duty. He saw it as so important to shareholders that reducing the regular payout of cash to loyal investors might permanently alter GE’s valuation. He also knew that cutting the dividend would be a permanent stain on his own record.”2

Unfortunately for Immelt, GE would have to cut its dividend. For years after, he would refer to that day as his worst-ever as CEO.

In short, the powerful positive signaling of a regular cash dividend is not a factor that should be neglected by investors searching for high-quality companies in today’s volatile market.