Emerging Markets: Too Big to Ignore in 2022 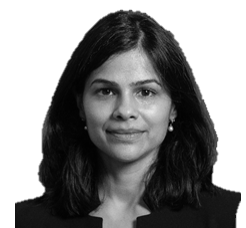 Emerging markets (EM) are entering 2022 from a low base after their economic recovery was hindered by the resurgence of COVID-19 variants, China’s regulatory crackdown and concerns of a more hawkish Federal Reserve (Fed). We expect 2022 to be another reversal of fortunes, quite like how 2021 was a reversal of 2020. What makes us confident of the turnaround is renewed policy easing efforts in China, an improvement of fiscal and current accounts in EM, continuation of global growth and rising trade volumes alongside an uptick in the pace of digitalization and decarbonization.

Growth in EM remains more sensitive to the state of the world than in developed markets (DM). EM are highly dependent on global factors to drive local growth. 2021 has shown us that while we are far from resolving COVID-19, corporations and governments worldwide have learned to cope with the peaks and troughs of the pandemic. For this reason, we remain optimistic that global growth is set to remain on track in 2022. This should not only reduce demand for safe-haven U.S. dollars but also bolster structural forces to foster EM growth in 2022. 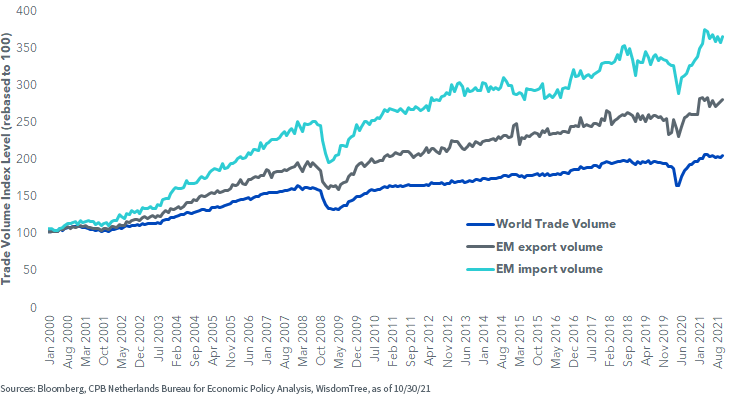 A key hurdle facing EM investors is the Fed’s more hawkish stance. The minutes of the December 15 Fed meeting clarified that the more aggressive orientation toward policy extends to the reduction of the balance sheet starting in 2022. This implies a first rate hike by June 2022. The markets are pricing in more than a 90% probability of a Fed rate hike by March 2022 following St. Louis Fed President James Bullard’s comments. While a more aggressive rate tightening would be a headwind for EM, we believe EM economies are in a much better position to withstand the rising rate environment owing to their stronger fiscal and current accounts balances.

Higher commodity prices have also been a windfall for the exporter. Central banks in EM have remained vigilant and some have already raised rates to tackle inflationary pressures, including Russia, Brazil, Chile and Peru. 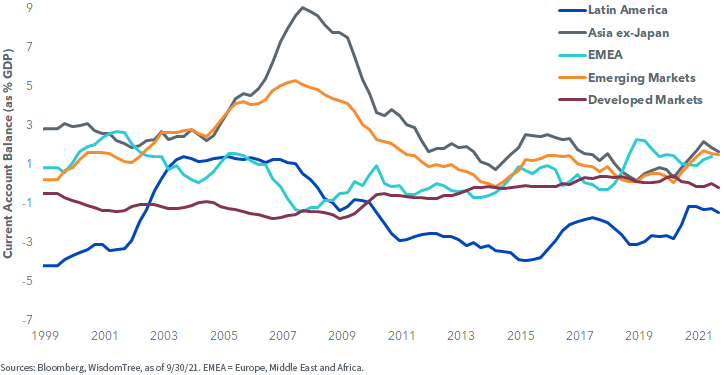 It’s Different in China this Time

The experience of 2021 shows us that Chinese policy makers appeared intent on reducing the economy’s dependence on investment in the real estate sector and geared the economy toward consumption of more domestic goods and services. This clearly did not pan out as planned. By the end of 2021, Chinese policy makers finally threw in the towel and mobilized forces to re-stimulate the economy. We believe the economic restructuring of resources away from real estate toward agriculture, energy and technology will be a more long-term project by China, Inc., than originally planned. It is evident that Chinese authorities have a pro-growth agenda, have given way to renewed policy easing and are willing to utilize the tools when needed. Easy financial conditions in China have been an important tailwind for economic growth and provide an important positive ripple effect for broader EM. The regulatory crackdown in China last year has been an important headwind for EM investors. However, it is expected to ease with the culmination of the Chinese Communist Party’s 20th National Congress, as it has in past political cycles.

One of the big differences between DM and EM stocks lies in their ownership structures. The largest share of EM companies are SOEs, in which a government entity has significant (more than 20%) ownership control. China has one of the highest proportions of state ownership within EMs. Notably, the rise in default rates of SOEs within China has certainly played a role in turning investors’ attention to non-SOEs. We have held the view for a while that non-SOEs display a structural advantage versus SOEs in terms of higher performance, higher quality (ROE and ROA) and lower leverage1. Owing to the lower degree of state ownership, non-SOEs also have an inherent tilt toward ESG via better corporate governance and environmental considerations. The WisdomTree Emerging Markets ex-State-Owned Enterprises Fund (XSOE) enables investors to capitalize on the long-term growth opportunity of EMs while limiting exposure to SOEs. It aims to deliver two important factors—long-term growth and quality—as it screens for companies with significant government ownership. This is evident in the table below from the relatively higher long-term growth rate and quality metrics compared to its peers.

1 From 12/30/07 to 6/30/21, SOEs represented a broad-based market capitalization-weighted portfolio of companies that have more than 20% ownership by a government entity.