Have you read Reminiscences of a Stock Operator yet?

It’s the one by “Edwin Lefevre,” the pen name for Jesse Livermore, the legendary speculator who famously played critical roles in the markets a hundred years ago, perhaps even causing the crash of 1907.

He tells a story of the Pennsylvania Dutchman, “the wisest investor he ever knew,” which is saying something when you consider that Livermore rubbed elbows with the highest of society in New York and London.

In Reminiscences, the Pennsylvania Dutchman relayed a story to Livermore of the time he owned a sizeable stake in a company named Atchison, whose president, a Mr. Reinhart, was under fire for being reckless with shareholder capital:

Mr. Reinhart not only denied the allegations emphatically but said even more: He proceeded to prove by figures that the allegators were malicious liars. The Pennsylvania Dutchman had asked for exact information and the president gave it to him, showing him what the company was doing and how it stood financially, to a cent.

“You see,” he said, “I noticed that President Reinhart, when he wrote down figures, took sheets of letter paper from a pigeonhole in his mahogany roll-top desk. It was fine heavy linen paper with beautifully engraved letterheads in two colors. It was not only very expensive, but worse: it was unnecessarily expensive. He would write a few figures on a sheet to show me exactly what the company was earning on certain divisions or to prove how they were cutting down expenses or reducing operating costs, and then he would crumple up the sheet of the expensive paper and throw it in the waste basket. Pretty soon he would want to impress me with the economies they were introducing and he would reach for a fresh sheet of the beautiful notepaper with the engraved letterheads in two colors. A few figures-and bingo, into the waste basket! More money wasted without a thought. It struck me that if the president was that kind of a man he would scarcely be likely to insist upon having or rewarding economical assistants. I therefore decided to believe the people who had told me the management was extravagant instead of accepting the president's version and I sold what Atchison stock I held.”

Atchison sounds like just the kind of company we don’t want to get past WisdomTree’s screens.

We want to avoid these people—the “President Reinharts” of the world. The extravagant parties, the ridiculous acquisitions, the corporate jets, the conglomeration instinct.

Figure 1 shows the historic three-year annualized returns of the stocks that most heavily dilute their shareholders, along with the returns of the companies whose management repurchases stock.

In bull markets or even choppy markets, you could usually flip a coin between the “buybackers” and the diluters.

But the bear markets are a completely different story, to say the least (figure 1). 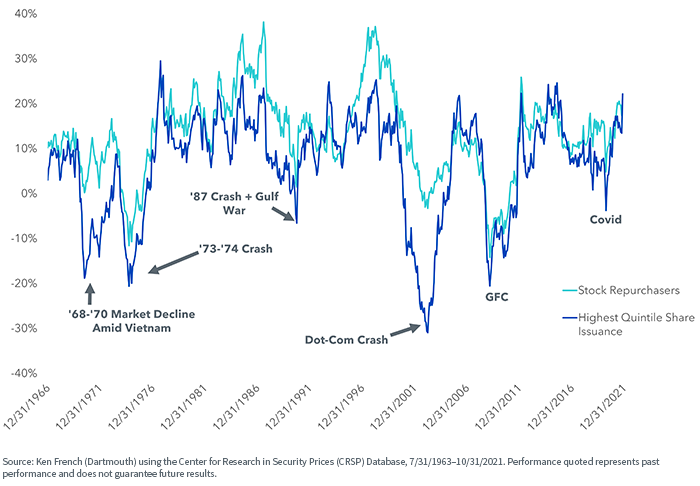 When the Vietnam War gave investors a scare from 1968–1970, the stock market’s internals told two tales. On one side were the biggest diluters, whose shareholders lost 18.8% annually over three years. On the other were companies buying back shares, whose stocks as a collective showed a tiny gain.

For investors who kept their wits about them and did not swear off the stock market after 1970, the 1973–1974 crash was right around the corner.

Everyone got clobbered in that bear. Even a dollar invested in share repurchasers collapsed to 58 cents by the end of it. But that was not nearly as bad as the decline to 43 cents that happened to the companies that were issuing stock.

Fast forward to the dot-com bubble. Some people were so burned by it that they never got back in.

Consider the pain they went through. From the dot-com bubble’s top to the bear market bottom, the S&P 500 declined 45%. Bad enough, but not nearly as brutal as the nearly two-thirds wiped off the value of the two quintiles of stocks that diluted their shareholders the heaviest (figure 2). 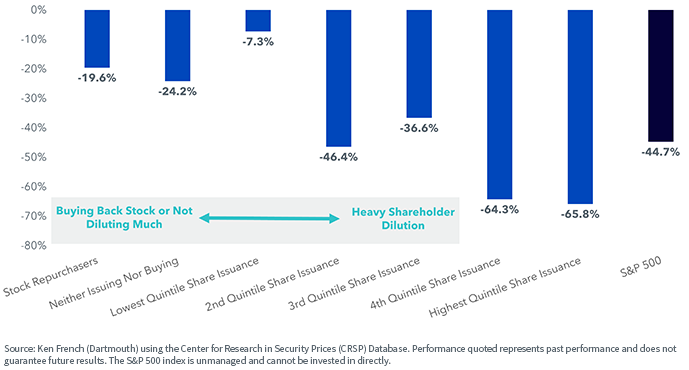 When investors lose two-thirds of their capital, they have to “triple up” to get back to even. That is hard to do if you have moved to 100% cash because you threw in the towel.

And it’s a much different place psychologically than the state of affairs of more conservative investors in the wake of the dot-com crash. Most such investors did take a loss, but it was bearable.

None of this is to say that buying back shares is the be-all and end-all. Some of these management teams wait until the ninth inning before they announce a big purchase program. But for each of those, there is the other alternative: the ones that throw a lavish party on the stockholders’ dime.

It’s hard to do those things if you lay in bed every night knowing you need to come up with a few billion dollars to fulfill the obligations of your announced buyback program.

Of all our mandates, the WisdomTree U.S. Value Fund (WTV)* may be the one that most taps into this concept, this returning of capital back to its rightful owners.

After the November rebalancing, WTV's dividend and buyback yields summed to 7.65%, or about 5 percentage points more than the S&P 500.

Something important: we recently made the business decision to slash WTV's expense ratio to 0.12% after nearly 15 years at 0.38%.

* Prior to January 3, 2022, the Fund was known as the WisdomTree U.S. Quality Shareholder Yield Fund, using the ticker symbol QSY.

For the most recent standardized performance, yield, and month-end performance click here.