As an eventful year heads into the final stretch, let’s evaluate one of our highest conviction investment themes in recent years.

Do we still believe investing in non-state-owned companies in emerging markets is better than investing in the full market?

Our answer to that question is: yes.

Chinese companies have been under regulatory pressure over the last few months, causing equity prices to recede as much as 32%1  from five-year highs.

This regulation comes on the heels of an extremely profitable 2020 for technology and retail companies, and looking ahead to next year’s Communist Party Congress where President Xi could be tapped to lead the country through 2032. Emerging markets are no strangers to regulatory risks; therefore, these markets tend to trade at a significant discount to developed markets and have provided higher returns over the long run.2

Regulatory concerns from China along with a broad-based commodity rally have impacted the relative performance of non-state-owned enterprises (non-SOEs) versus state-owned enterprises (SOEs).
As we can see in the chart below, there have been periods where the trailing 12-month performance of non-SOEs underperformed that of SOEs. These periods have typically been short-lived, and we’ve seen a steep reversal in the trend.

We maintain our view that investing in companies with stronger governance and more efficient operations will tend to outperform over the long run. Whatever new regulation comes out, we believe non-SOEs will always be better positioned to be more dynamic and efficient and better maximize shareholder value than SOEs, which tend to serve government interests.

Taking SOE Risks off the Table

WisdomTree’s Emerging Markets ex-State-Owned Enterprises Index and China ex-State-Owned Enterprises Index—EMXSOE and CHXSOE respectively—seek broad exposure to the emerging markets and Chinese markets, respectively, favoring non-SOEs and reducing the exposure to those companies that can be subject to these conflicts of interest.

The two most notable updates are the increased exposures to China Class A shares and how these Indexes have continued to switch from Chinese ADRs to the equivalent Hong Kong listings.

EMXSOE and CHXSOE increased their cap for Class A shares from 5% to 7.5% and 25% to 33%, respectively. The Chinese domestic stock market has continued to grow, and updating this cap will allow these Indexes to fully reflect the composition of the market. Both EMXSOE and CHXSOE will be overweight compared to their broad market benchmarks.

Below are the 10 largest ADRs along with their weight in CHXSOE prior to rebalance. 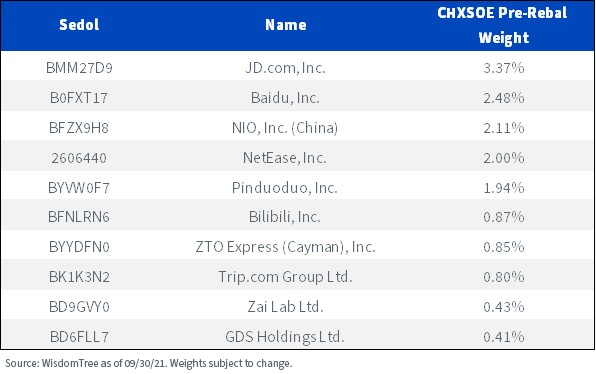 After reconstitution, EMXSOE’s country exposure was reset to match its starting universe, while its sector tilts continue to be overweight in the Consumer Discretionary and Information Technology sectors and underweight in Financials and Energy.

CHXSOE pared some of its sector tilts during reconstitution but remains overweight in the Information Technology and Health Care sectors, and underweight in Energy and Financials with respect to the MSCI China Index.