I have reason to believe the next three months will bring Santa down the chimney.

Though most shoppers don’t start thinking about buying presents until around Thanksgiving, stocks begin anticipating Christmas and Hannukah sales right around now.

If we get a scenario where October rolls around and the delta variant’s headlines are tame relative to what they are now, there is a distinct possibility the U.S. consumer will spend robustly in the fourth quarter.

Consider the money sitting in family bank accounts. Whereas Americans had about $11 trillion stashed away in Q4 2019, the quarter before COVID-19 lockdowns, that figure will likely be somewhere in the $15 trillion area when the second half data is reported by the Federal Reserve (figure 1). 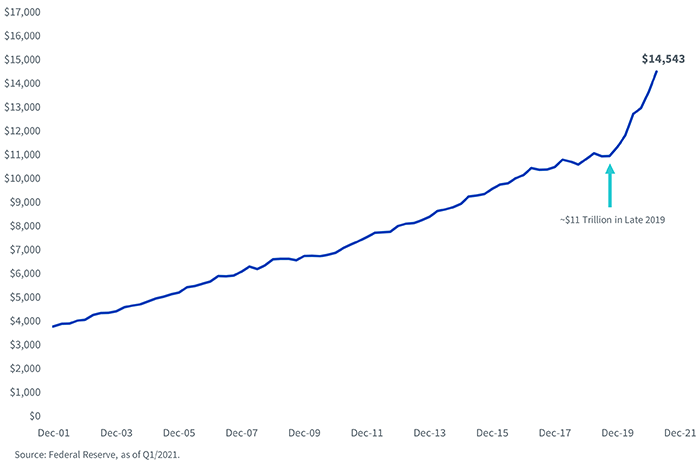 Though stimulus payments are clearly part of the picture, I am not sure the Street truly appreciates how cashed-up many everyday Americans are now that so many are working from home, spending much less money commuting as well as receiving surprise checks from the government.

How many people outside of California know that about two-thirds of that state’s residents got a state-specific stimulus check in September, dubbed “Golden Stimulus II?” It amounted to $600–$1,100, depending on household circumstances. My guess is the typical money manager in New York or Boston has never heard of it, yet that stimulus alone hit the bank accounts of about 7% of American families.

In the other 49 states, we have tens of millions of people who are flat-out not coming into the office, many of whom are seeing their compensation rise. Add it up: no tolls, no gasoline and no $10–$12 burned on a daily trip to Chipotle, scarfed down at the desk under the keen eyes of a clock-watching boss.

Though the overwhelming majority of Americans commute in a car, take a look at figure 2—New York subway ridership—for an idea of how many Americans have been piling up savings by not feeding parking meters, not shelling out for a presentable pair of shoes, certainly not grabbing the Mastercard to pay for a business suit.

It is not just the work-from-home army that may be feeling flush. Across the labor market, employees feel emboldened. In the latest Job Openings and Labor Turnover Survey (JOLTS) from the Bureau of Labor Statistics, 71% of all job leavers were willing quitters (figure 3). That is what you do when you have a better idea in mind, be it your own business venture, confidence you can find another job or the most common, another job with better pay already lined up. 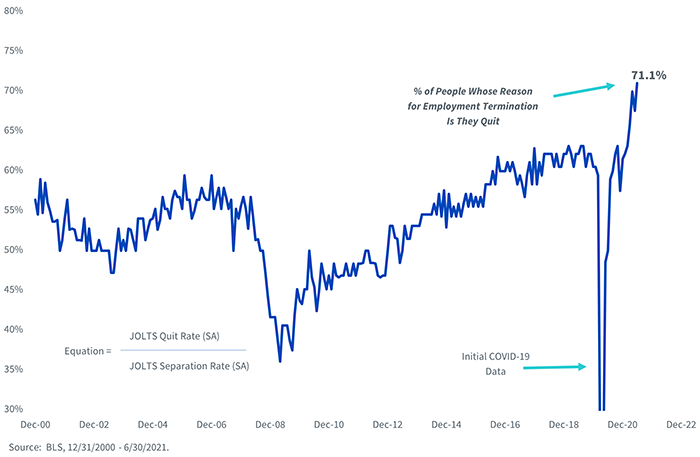 The “quits data” is corroborated by what the public told the Fed in its Survey of Consumer Expectations. Though it was last tallied in Q1, respondents with less than a college education said they expect their next job offer to be $48,600. That’s a 24% jump from what they said in Q1/2020, and $5,600 higher than the highest response recorded in any first quarter from 2015 to 2020.

Many only recently collected the early tranches of COVID-19 stimulus too—a phenomenon that witnessed people that got overlooked in prior rounds being given, for example, the $1,400 that was supposed to go out in March.

Was a “COVID baby” born in a middle or lower-class household in 2021? Then that household will receive a catch-up check for up to $1,400 on their 2022 tax refund, over and above the child tax credit…which itself was increased exponentially.

Nevertheless, it is critical that we challenge our premises.

To do that, there is no better data than the University of Michigan Consumer Sentiment Index. It may be the boldest counter-argument in the bears’ arsenal. The chart speaks for itself (figure 4). 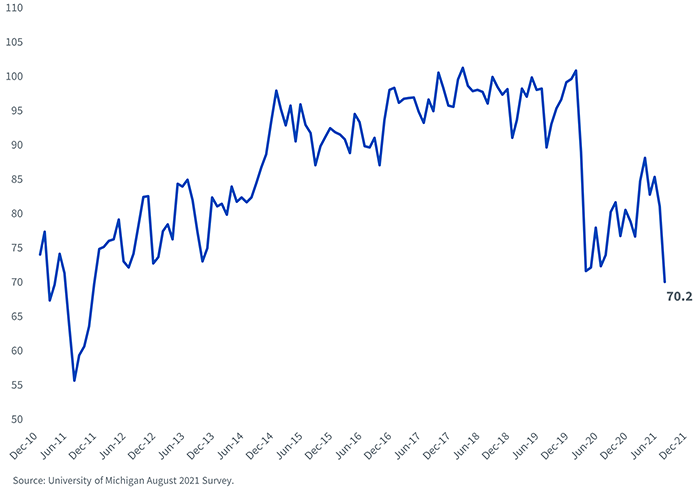 Also, though they may have a new job that pays more, some Americans are feeling the pinch of a rent raise, or they checked the price of their dream house on Zillow, with their jaw on the floor (figure 5). 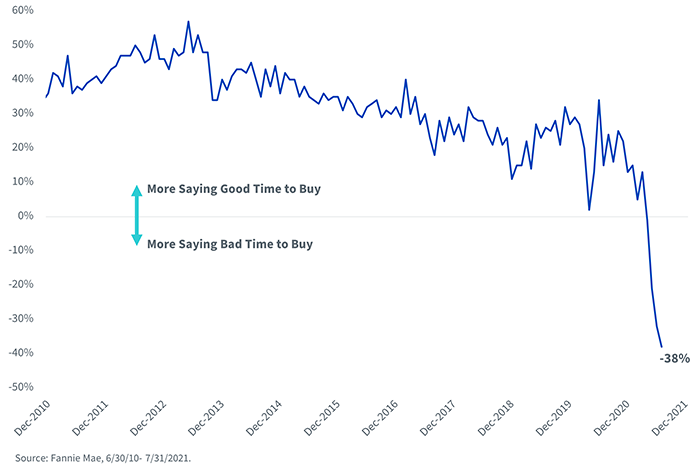 Nevertheless, the child tax credit is not getting the attention it deserves. I think it will fuel spending and inflation in Q4.

Compared to last year’s $2,000 per child, families are going to see a big jump in the credit for calendar 2021. The amount for children under six is now $3,600, while the number for older children is $3,000. This means a household with one young and one “old” child will receive $2,600 more than they did last year.

That is a lot of money for the median household, whose income was $68,703 when the Census Bureau tabulated it in 2019, the latest year with complete data.

That money is being front-loaded too, with the first three of six monthly checks already direct deposited in July, August and September. The last of the six-check annuity hits right before Christmas.

An offset to consider: the $300 per week federal unemployment top-up ended several weeks ago. Then again, there are far more people raising kids than there are unemployed.

Finally, you may be able to glean an idea of the spending impulse by looking at the National Retail Federation’s back-to-school surveys. Though it collected the data back in June, before the COVID-19 delta variant started frightening people, 26% of respondents stated that they had already started back-to-school shopping, up from 17% in 2019.

Because the money was there.

This environment strikes me as one that continues the “COVID-19 reopening” trade that has persisted for more than a year.

In U.S. equities, that environment was most accretive to our mandates that skew toward small caps and value. There’s no need to make it complicated; that is what has worked and what I think will continue working.

That seems like a sector mix that looks past the delta variant toward a vision of a booming holiday shopping season, one where wages are being topped up, inflation is making headlines and CNBC broadcasts from the Mall of America…with the background shot being swarms of people buying toys for the kids.

There are risks associated with investing, including the possible loss of principal. Funds focusing their investments on certain sectors and/or smaller companies increase their vulnerability to any single economic or regulatory development. This may result in greater share price volatility. Please read each Fund’s prospectus for specific details regarding the Fund’s risk profile.

Investments focusing on certain sectors and/or smaller/mid-sizes companies increase their vulnerability to any single economic or regulatory development.

There are risks of investing in value stocks such as the potential that a particular stock may not rise to its anticipated intrinsic value and could decline further in value.

Small and Mid-Cap Risk - The securities of small and mid-cap companies generally trade in lower volumes and are subject to greater and more unpredictable price changes than larger capitalization stocks or the stock market a whole.  Small and mid - cap companies may be particularly sensitive to adverse economic developments as well as changes in interest rates, government regulation, borrowing costs and earnings.

Value Investing Risk - Investments in value stocks present the risk that a stock may decline in value or never reach the value the adviser believes is its full market value. In addition, a value investment strategy may go out of favor with investors during certain parts of the market cycle, which may negatively affect the investment’s performance.