What’s the Likely End for Evergrande?

The financial world seems fixated on Evergrande, the Chinese real estate company with a larger-than-life CEO and larger-than-average debt burden.

But as I tweeted last week, I don’t believe Evergrande’s demise poses systemic risk to the China equity market.

Although its debt of $300 billion is high, the problem has not arisen suddenly like Lehman Brothers. During the Lehman crisis, the confusion over “who owes what with how much leverage” is what led to contagion.

In fact, the Chinese government has generally had some idea of how much risk Evergrande and other highly leveraged real estate companies pose since last year. The government also has had experience restructuring and winding down a few very large firms, such as Suning, Anban and HNA Group.

So, what is the likely end for Evergrande? And who are the likely winners and losers?

1. Evergrande as a company likely will go bust, depending on how you define “bust.” It could be broken up and sold off like the insurance conglomerate, AnBang. In that situation, the brand name was lost and the CEO was convicted and sentenced to 18 years in prison. Or, it could also end up like HNA Group, where the founder’s  equity was completely wiped out. In that case, the government proclaimed that “it is what free market should be.” It might be lucky and continue to exist, like Suning, whose founder was able to quietly keep some money. In any case, the founder’s best hope is to stay out of prison and keep some money while Evergrande is re-structured.

2. Equity holders will most likely be wiped out, with holders of bond and wealth management products taking significant haircuts. Banks will also take a hit. Vendors and suppliers likely will also take some hit but to a smaller degree. It is important to keep in mind that Evergrande does own significant assets in land and property servicing businesses. It is in a credit crunch now because China set a specific goal of deleveraging the real estate sector and, since last year, capped bank lending to them.

3. Its fate could depend on how successful the local Guangdong province is in lining up private capital. The more Evergrande needs to rely on the central government instead of its own province of Guangdong for capital, the worst its fate. The central government needs to be seen as rescuer of the people, not bailing out rich founders and investors.

It’s hard to go into detail on the specific Chinese province versus central government power play at work, but, Guangdong province—the richest in China—has about $83 billion of shareholder equity under its local state-asset supervision and administration commission. Most of the state assets in Guangdong belong to Shenzhen city, where Tencent is headquartered. Evergrande is headquartered in the rival city of Guangzhou. In the Suning case, the local government didn’t have enough capital, but was able to put together a list of local firms and stakeholders to bail out Suning, instead of asking help from the central government.

4. The Chinese central government will take credit and benefit from the Evergrande saga. To solidify political power and be seen on the side of the people, the central government has gained popular support by being viewed as tackling three issues: education inequality, high housing prices and affordable health care.

Fundamentals will drive investment returns in the long run. China's leading companies are growing at healthy rates, as the below table shows for the top 10 holdings for the WisdomTree China ex-State-Owned Enterprises Index and the S&P 500 Index. The uncertainty in the market creates fears and lower valuations that ultimately could be beneficial to the long-term shareholder.

Regulatory actions like we are seeing now are not new for close China watchers. But people are paying more attention. News of China and the political angles will not stop coming—there will simply be more reporting on China in the U.S. in the next 10 to 20 years. 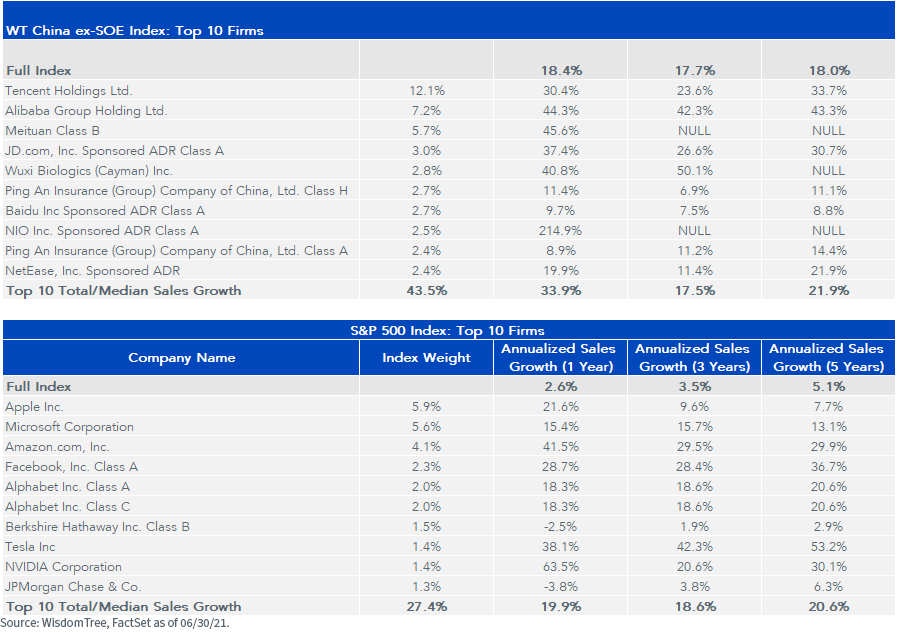 + How Many China A-shares Are in Your China Portfolio?