The Pennant Winner Is…

At the start of the 2004 season, the juggernaut New York Yankees were coming off six World Series trips in eight seasons and had four championship trophies.

The team had also just pulled off a trade for 2003 American League (AL) MVP Alex Rodriguez to bolster its lineup for the better part of the next decade.1

Both recent history and logic indicated that Yankee Stadium was going to run out of space to store all the hardware they were set to win in the years to come. 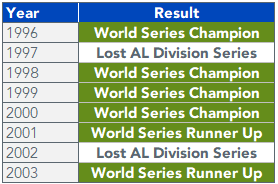 But how fortunes change.

In the next 17 seasons, the Yankees captured just one AL pennant.2 To put it context, that has meant one fewer World Series appearances for the Yankees than for the Tampa Bay Rays, who were last in the 2003 AL East standings.

The Yankees/Rays anecdote illustrates the difficulty of imagining the future looking drastically different than what we’ve seen in recent history. The behavioral finance term for this common cognitive bias is recency bias.

The prolonged stretch of outperformance from a handful of large tech-enabled companies—most prominently Facebook, Amazon, Netflix, Alphabet, Microsoft and Apple—has been remarkable.

A whole generation of investors has only known a world in which a select few of the biggest, most recognizable companies have gone nowhere but up.

This same generation of investors also came of age thinking it was an annual rite of passage for the Yankees to play in the World Series in late October. But the future does not always closely resemble recent history.

Another common behavioral bias for investors is called the disposition effect, which refers to a tendency to sell our winners too soon and hold onto our losers too long.

Investors in FANAMA—who hopefully didn’t sell too soon—haven’t had to grapple with holding onto losers.

Since last September, cyclically sensitive stocks have rallied relative to the growth favorites of the last few years. 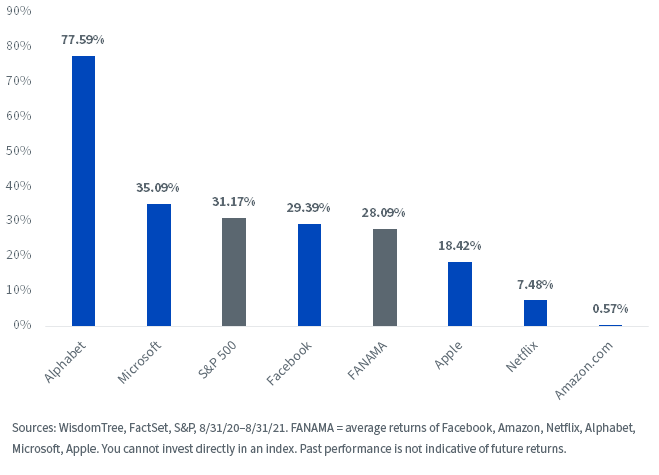 It’s understandable that investors may be reluctant to throw in the towel on FANAMA after a blip of underperformance relative to the past six years.

On the other hand, history does support that the largest market-cap companies today are unlikely to hold their positions over the next decade. 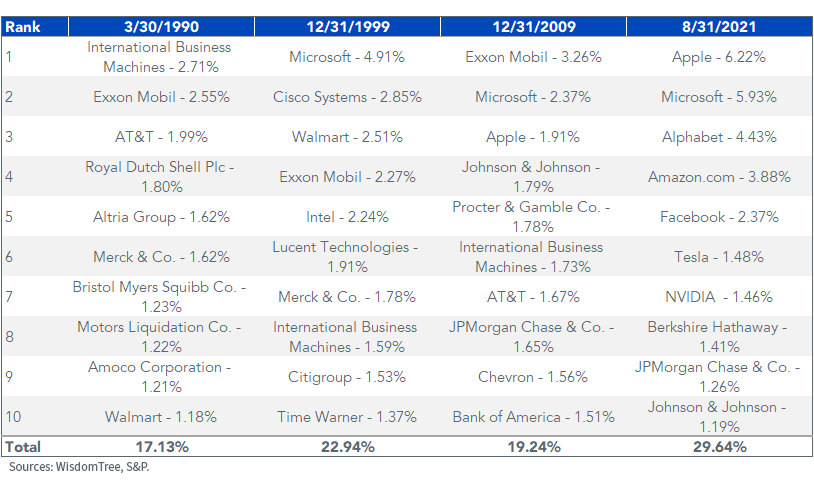 Just as we are all aware that diet and exercise will make us healthier, we are also aware of the common behavioral biases that make us extrapolate recent patterns into the future—recency bias—or that make us hold onto a loser for too long—the disposition effect.

Our awareness of these biases and the challenges of market-timing buy/sell decisions is why WisdomTree favors systematic, rules-based investment strategies that mitigate them.

One such strategy is our WisdomTree U.S. Quality Dividend Growth Index.

We think an approach such as this can fulfill, or round out, a core position in a portfolio without making any outsized bet on single names.

In a follow-up blog post, we will take a deeper dive into how FANAMA have contributed/detracted from returns of our quality dividend growth index. 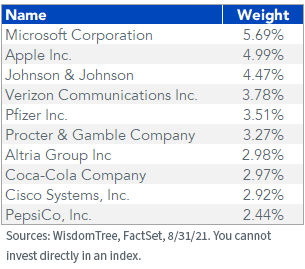