What Does Didi’s Regulatory Situation Mean for Chinese Firms?

We see four considerations for investors resulting from the recent scrutiny of Didi Chuxing Technology Co. (Didi) and Chinese regulators:

1. The differences between Didi and Ant Financial: Ant was already approved to list in mainland China and Hong Kong. Its IPO was halted due to concern about its role in systematic financial risk. Due to profitability requirements, Didi likely wouldn’t get listing approval in Hong Kong or mainland China but its investors didn’t want to miss its current U.S. equity market valuation. It appears to have defied Chinese regulators request to delay its listing. In this regard, Didi’s situation has its own idiosyncratic risks, and is therefore not a good comparison to Ant Financial.

Chinese regulators want a formal say in Chinese firms listing offshore, which they didn’t have before. So far, the concern is more about listings in the U.S., rather than Hong Kong. Neither the U.S. nor China wants Chinese firms to list in the U.S. The biggest benefactor will likely be the Hong Kong stock exchange.

2. Will U.S. and foreign investor money move to Hong Kong? We believe this is the biggest uncertainty. For institutional investors, it appears to be the case. After Alibaba and other U.S.-listed companies completed their secondary listings, many institutional investors switched U.S. shares for Hong Kong shares. WisdomTree has also done the switch for companies like Alibaba that have sufficient trading liquidity. For ETF investors, this has already happened.

In many of the unofficial speculations, Didi has suggested that a Hong Kong listing would get a 20%–30% valuation discount compared to a U.S. listing. A risk is that as Chinese tech firms move to Hong Kong, valuations will be compressed. Tencent has always been listed in Hong Kong and has dodged many regulatory headlines with its savvy political sense. Its stock movement is partly indicative of valuation compression due to the uncertainty related to Hong Kong’s political situation.

3. When it comes to regulation, we need to think beyond Chinese technology. Recently, BGI Genomics, a Chinese gene sequence company, was in the news for collecting and storing genetic data. There are four laws that Chinese firms have to take seriously: National Security Law, Internet Security Law, Data Security Law and Personal Information Protection Law. It is no secret that Chinese firms have been more liberal in taking personal data for algorithm training for profitability. Health care companies are as much the target as technology companies. U.S. technology and health care firms could face increasing scrutiny from the U.S. government as well.

4. We believe the bigger risk is still macroeconomic growth. At the same time Didi was in the headlines, the Chinese central bank, at the direction of the National Council, took the market by surprise by lowering the reserve requirement, which we see as more significant than Didi’s news. That has been somewhat overlooked by the English language media, which has focused more on the regulation risk.

China’s trend economic growth in next 10 years is in the 4.5% to 5.5% range. For the first half of 2021, growth is less than expected than the beginning of year consensus forecast. Compared to regulations, this macro growth slowdown may be a bigger risk to China’s equity market. China’s broad economic policies will likely have more impact on the country’s equities than its regulations.

China doesn’t have regular unemployment data by age, and unemployment is a lagging indicator. But from open-source limited news releases, it appears to be among policy makers’ list of main concerns. In particular, there is strong view in China that unemployment, particularly youth unemployment is a political stability concern. In the next two years, China may face many political transitions that could result in high volatility for Chinese equities. 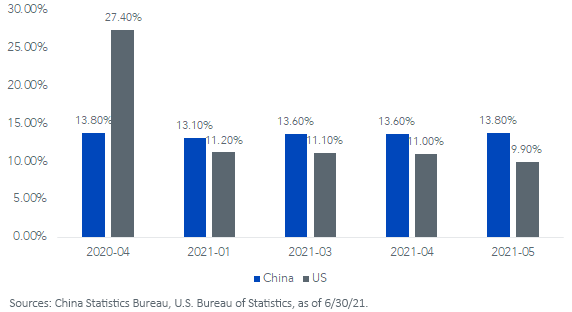 + The Unsaid Truths of China Tech