It’s hard to believe that we’re already six months into 2021 and over a year removed from the outbreak of COVID-19.

Now that the economic recovery has been in force for a few months, and as investors pile into one of this year’s most popular investing trends—the “reopening” trade—we think it’s a good idea to assess U.S. mid-cap valuations.

We’ve written extensively about the reopening trade so far this year, and one area of the market that has already benefitted from the trend, and may continue to do so, is U.S. mid caps.

The thesis is intuitive. After a brief but severe recession, the cyclical sectors and market segments most leveraged to overall levels of economic activity may disproportionately benefit from pent-up demand and a corporate earnings revival.

Given their importance as cogs in the global supply chain, U.S. mid-cap equities epitomize the reopening trade.

Since we’re already months into the economic recovery, it’s important to be discerning about current valuations when selecting a new mid-cap allocation or choosing to retain an existing one.

As of May, the Russell Midcap Index was trading at nearly 24 times estimated earnings and more than 28% higher than its historical average dating back to early 2007. Perhaps that does not seem pricey in absolute terms, but consider that the index’s forward price-to-earnings (P/E) ratio is ranked in the 92nd percentile over that timeframe (a higher percentile rank indicates a higher forward P/E value, with the 100th percentile as the highest on record).

There have been only 12 instances when the month-end forward P/E of the Russell Midcap Index was higher than it was at the end of May, and they’ve all been within the past year.

The S&P MidCap 400 Index is a bit more modest, trading at a comfortable 10% forward P/E premium compared to its historical average. But this premium remains in the 85th percentile over the same period, indicating it’s still wildly high by historical standards.

But not all mid caps are the same.

In fact, the WisdomTree U.S. MidCap Fund (EZM) stands out among the indexes for its forward P/E sitting close to its historical average, dating back to inception in February 2007. This is made possible by its earnings-weighted methodology, which defends against high P/E measures by favoring companies with greater earnings.

More importantly, it is trading at almost its highest discount in history compared to the Russell Midcap Index on a forward P/E basis. Since inception, EZM has always traded at a forward P/E discount due to its earnings weighting, but the current gap is almost as steep as it has ever been. 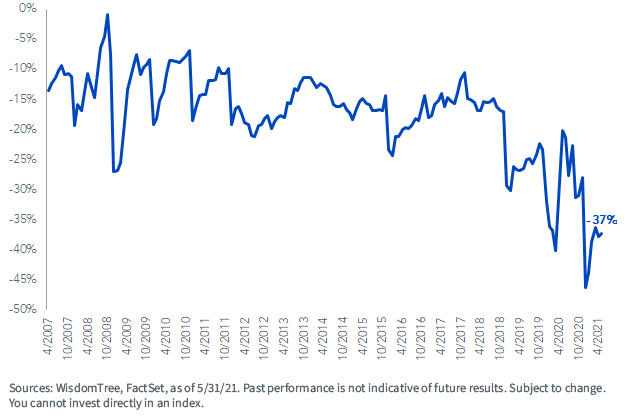 We think this signals an important value opportunity for two reasons.

If markets continue to run up alongside the economic recovery, then we would expect that a mid-cap fund with an earnings focus could potentially benefit from renewed growth.

Likewise, mid caps tend to perform better in cyclical economic sectors compared to larger market benchmarks such as the S&P 500.

Cyclicals have already started to enjoy the benefits of the reopening trade. If they have more room to rally, then there’s reason to believe EZM’s cyclical overweight may be additive.

On the other hand, if markets sour, there’s a possibility that the high valuation companies within the Russell MidCap Index could be the first to suffer. Fortunately, since EZM has been able to resist the valuations run-up thus far, it may potentially be more insulated from a reversal.

Let’s elaborate on the last scenario.

The U.S. economy has been in recovery since the end of the second quarter last year, which leaves market participants wondering when the next slowdown will materialize.

Whenever that may be, it’s important to never sacrifice quality exposures during the middle of an economic cycle. Lower-quality companies may stand to lose more than gain going forward, especially since they’ve already performed well since the recovery took hold late last year.

Therefore, it’s important to emphasize both the quality and value factors in your mid-cap allocations. In fact, we tend to think of EZM and its exposure to both as a “quality value” allocation.

Where Does Quality Come From?

To help protect against major volatility, we introduced a new composite risk scoring mechanism in the creation of the WisdomTree U.S. MidCap Index, which EZM tracks.

We introduced four quality factor measurements and a momentum factor component to help defend against companies that may technically be eligible for inclusion, but also introduce disproportionate risk.

The quality pickup in the portfolio implies that EZM can potentially seek to mitigate risk from a swift market reversal as the underlying companies are fundamentally healthier. Both return on equity (ROE) and return on assets (ROA) improve significantly compared to the Russell and S&P mid-cap indexes.

Preparing for tomorrow’s market environment is already challenging, especially since bull and bear views have direct implications for mid-cap allocations.

During a year where lower-quality mid-cap companies have already rallied and booked attractive gains, we think it’s now time to prepare for higher-quality leadership.

No matter your economic forecast for the near future, we think the WisdomTree U.S. MidCap Fund (EZM) could be a part of it.

There are risks associated with investing, including possible loss of principal.  Funds focusing their investments on certain sectors and/or smaller companies increase their vulnerability to any single economic or regulatory development.  This may result in greater share price volatility.  Please read the Fund’s prospectus for specific details regarding the Fund’s risk profile.

There are risks of investing in value stocks such as the potential that a particular stock may not rise to its anticipated intrinsic value and could decline further in value.