Have We Entered “The Great Inflation 2.0”?

“The Great Inflation” is a momentous period in U.S. economic history that lasted for 17 years between 1965 and 1982. During this time, the world’s largest economy experienced high levels of inflation that even went into double digits. History books tend to attribute this to the U.S. Federal Reserve (Fed) being too complacent about potential increases in inflation and too fixated on tackling unemployment. The painful memories of the 1930s and the Second World War had a role to play in this.

Undoubtedly, we live in a different world today, but certain parallels can still be drawn. The Fed’s current stance is that inflation is likely to be transitory. The central bank is therefore in no real rush to pull back its unprecedented monetary accommodation that it introduced during the COVID-19 crisis. Markets, it appears, do not share that view, given that inflation expectations are continuing to rise (see figure 1 below). 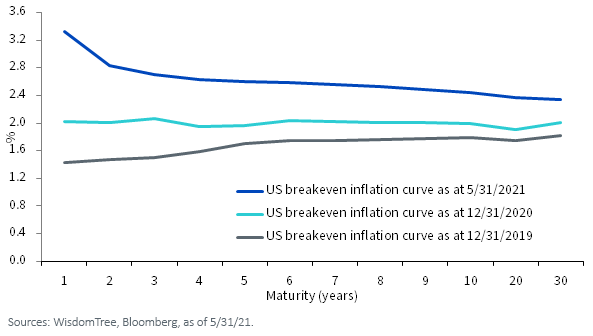 Why might markets be challenging the narrative the Fed is currently subscribing to? There are four potential reasons.

First, the confidence markets have in the Fed’s ability to control inflation without creating tectonic shifts in asset markets may be diminishing. This is evident from the short and sharp spikes in the CBOE Volatility Index (VIX) around the Federal Open Market Committee (FOMC) meetings this year. While supporting financial markets may not be part of the Fed’s mandate, the central bank has become increasingly conscious of market movements in recent times.

Second, realized levels of inflation have started rising more broadly. Most recently, eurozone’s annual inflation rate has accelerated to 2% in May, up from 1.6% in April, and above consensus forecasts of 1.9%.1 While such readings are influenced by so-called base effects—i.e., the increase in the prices of inputs like oil—inflation could be sustained at a higher rate if commodity prices continue to rise and a commodity super-cycle is indeed underway.

Third, the pandemic has led to a renewed focus on fiscal stimulus by governments around the world to induce growth going forward. This was not the case for many major economies after the global financial crisis. From President Biden’s $2 trillion infrastructure pledge2 to the €2 trillion European Union stimulus3, the focus from governments is clear—the world needs better infrastructure. If monetary accommodation alone does not prove inflationary, fiscal stimuli could end up tilting the scales.

The fourth factor is pent-up demand from consumers as well as businesses. Consumer spending in the United States increased to pre-pandemic levels of around $13.4 trillion in the first quarter of 2021 from $13.0 trillion in the fourth quarter of 2020.4 If the pandemic can be characterized as the economic engine being parked rather than broken, pent-up demand could quickly cause consumer spending to overshoot the trend from recent years.

So, what can investors do? There are numerous ways to hedge against the risk of inflation, but broad commodities appear to be in favor among investors right now. Flows into broad-based commodity exchange-traded products have exceeded $11 billion this year5, with reflation among the key trends likely to be catalyzing investors’ renewed interest.

One potential way to obtain diversified commodities exposure for those looking for a potential inflation hedge is the WisdomTree Enhanced Commodity Strategy Fund (GCC). GCC is an actively managed exchange-traded Fund and intends to provide broad-based exposure to the Energy, Agriculture, Industrial Metals and Precious Metals commodity sectors via futures contracts. Similarly, gold has been rejuvenated since the start of the second quarter this year, staying true to its historical nature of responding more to actual increases in inflation than to inflation expectations. And if inflation is to surge to levels reminiscent of the “The Great Inflation,” gold’s relevance could be here to stay.

How persistent inflation turns out to be is likely to remain an ongoing debate. How investors choose to tackle the risk in their portfolios will probably also be a key consideration going forward.

Prior to 12/21/20, the ticker symbol “GCC” was used for an exchange-traded commodity pool trading under a different name and strategy.

There are risks associated with investing, including the possible loss of principal. An investment in this Fund is speculative, involves a substantial degree of risk and should not constitute an investor’s entire portfolio. One of the risks associated with the Fund is the complexity of the different factors which contribute to the Fund’s performance. These factors include use of commodity futures contracts. Derivatives can be volatile and may be less liquid than other securities and more sensitive to the effects of varied economic conditions. The value of the shares of the Fund relates directly to the value of the futures contracts and other assets held by the Fund, and any fluctuation in the value of these assets could adversely affect an investment in the Fund’s shares. Please read the Fund’s prospectus for specific details regarding the Fund’s risk profile.

+ Inflation and the WisdomTree Model Portfolios

Mobeen Tahir
Associate Director, Research
Mobeen is a member of WisdomTree’s research team where he focuses on a wide range of asset classes to offer strategic and tactical insights to our clients on global markets and investment products. Before joining WisdomTree in December 2018, Mobeen worked at Willis Towers Watson as an investment consultant advising institutional clients as well as their in-house fund business on asset allocation and portfolio construction with his research focus being equity and multi-asset smart beta. Mobeen has a BSc (Hons) in Accounting and Financial Management from Loughborough University and an MSc in Accounting and Finance from the London School of Economics and Political Science. He is also a CFA Charterholder.