It is no secret that so-called “impact” investors are gunning for the oil majors, or that Uncle Sam is salivating at the prospect of taxing the Silicon Valley giants, or that Big Tobacco is racing to get people vaping to reduce the stigma of its business model.

But when it comes to Chinese equity targets, whether by activists or regulators, the picture is murky.

Sure, a couple firms are notable for divestment headlines in recent years. One is Xiaomi, the smartphone maker, who the Western powers view as a security risk. Another is Huawei, the critical cog in telecom’s 5G rollout, which has been on the front page for a few years now. The picture is especially cloudy when you consider that the Chinese Communist Party (CCP) is still holding Canada’s “Two Michaels,” the businessmen held on trumped-up espionage charges in retaliation for the 2018 arrest of Huawei’s CFO at the Vancouver airport. Michael Kovrig and Michael Spavor could be executed if found guilty.

Can you think of any issue as universally bipartisan as China’s authoritarianism (figure 1)? 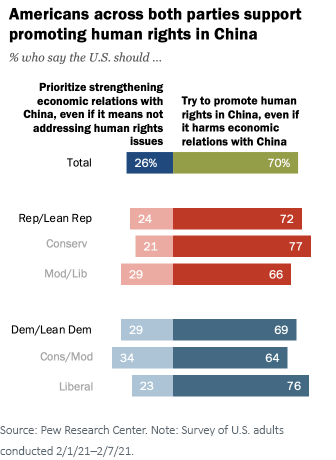 Another focal point are allegations of human rights abuses toward minority Muslims in the hinterland province of Xinjiang. In December, the European Parliament issued a statement saying “Parliament strongly condemns the Chinese government-led system of forced labour – in particular the exploitation of Uyghur, ethnic Kazakh and Kyrgyz, and other Muslim minority groups – in factories within and outside internment camps in the Xinjiang Uyghur Autonomous Region.”1 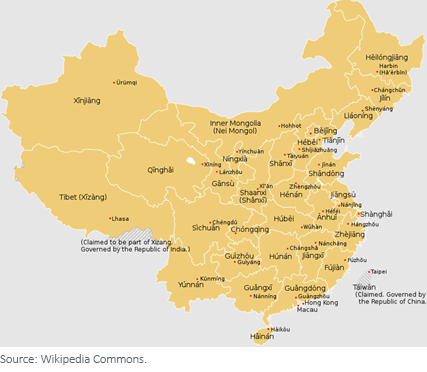 We believe the situation goes well beyond shoppers telling Sweden’s casual clothing brand H&M to stop sourcing cotton from that region, which grows 20% of the global supply. It could be viewed as a full-on societal pressure campaign on the CCP to abide by the global rules-based order. It is no stretch to forecast that the day is coming—or is already here—“when Western capital rejects China’s massive state-owned enterprises (SOEs) , as it did the apartheid-era South African stock market.

When the market takes fright at these ugly headlines, our research indicates it is often the SOEs that bear the brunt of the selling, as they are closest to CCP leadership.

Interestingly, when the market rages higher, the SOEs have also struggled. To wit, the SOE-heavy FTSE China 50 Index returned just 11.5% last year, a very different ballpark from the 61.1% run in the WisdomTree China ex-State-Owned Enterprises Index.

We hold no false illusions: Kicking out SOEs does not get the Party out of your portfolio. Just ask Alibaba founder Jack Ma, who has been largely “disappeared” since he gave a CCP-critical speech in October.

Nevertheless, a venture into our kick-out-the-SOEs strategies will help keep you away from many of the PLA-linked firms. It will also separate your capital from China’s megabanks, an investment decision that may prove fortuitous if the US, EU and allies such as Japan, South Korea and India open the sanctions playbook.

WisdomTree ideas for this concept are:

There are risks associated with investing, including possible loss of principal. Foreign investing involves special risks, such as risk of loss from currency fluctuation or political or economic uncertainty. CXSE focuses its investments in China, including A-shares, which include the risk of the Stock Connect program, thereby increasing the impact of events and developments associated with the region which can adversely affect performance. Investments in emerging or offshore markets are generally less liquid and less efficient than investments in developed markets and are subject to additional risks, such as risks of adverse governmental regulation and intervention or political developments. The Funds’ exposures to certain sectors may increase their vulnerability to any single economic or regulatory development related to such sector. As the Funds can have a high concentration in some issuers, the Funds can be adversely impacted by changes affecting those issuers. Please read each Fund’s prospectus for specific details regarding the Fund’s risk profile.

+ Driving Outperformance with a State-Ownership Screen

+ The Unsaid Truths of China Tech