As the first quarter comes to a close, there has already been a lifetime full of headlines in financial markets. From Bitcoin to GameStop to rising bond yields, there’s no shortage of market fairy tales, but the renaissance in global small caps and value stocks looks to be more of an enduring fact than fantasy.

Small caps have dominated to start the year, and value investing is finally gaining momentum. February was the best month for U.S. value relative to growth since the technology bubble in the early 2000s, outperforming by nearly 6%.

Take a look at the following chart, which relates the year-to-date performance of WisdomTree’s value-focused strategies in the U.S. and developed regions. 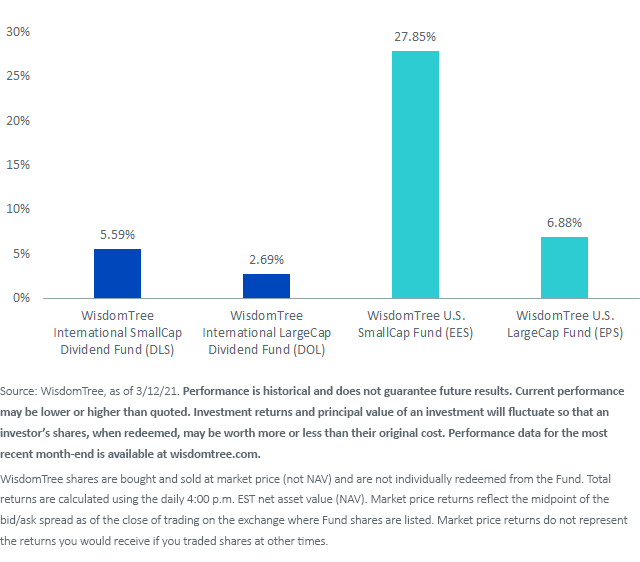 While the magnitude of outperformance has certainly been more pronounced in the U.S., developed small-cap value has doubled the performance of its large-cap counterpart as well.

We think this is emblematic of a changing paradigm and a new beginning for the downtrodden size and value factors.

We think sector composition tendencies have been especially helpful in fueling the recent rally in small-cap value, especially in an economic environment that gives cyclical sectors plenty of runway.

Many investment strategists anticipate a revival in economic growth in 2021, commensurate with the reopening of global economies, the COVID-19 vaccine distribution and a resurgence in consumer activity. Those trends may set up traditional value sectors, such as Industrials, Energy, Financials and Real Estate, for lasting success—key exposures in WisdomTree’s International SmallCap Dividend Fund (DLS) and relative over-weights compared to its large-cap counterpart (DOL, the WisdomTree International LargeCap Dividend Fund).

Most notable is the 10% over-weight in Industrials, which signals two potentially beneficial characteristics about DLS in today’s market environment.

First is the relationship between a revival in economic activity and how that would benefit sectors that are levered to this activity. Industrials, by definition, may be best positioned for an industrial comeback.

Second is the propensity for dividends in developed markets. Value investing and dividend payments are practically synonymous. After many European companies suspended their dividends last year during the throes of the pandemic, their resumption may be additive for a value rally that already seems to have caught a tailwind.

But one common fear when investing in smaller companies relative to larger ones is the sacrifice in dividend yield, particularly in the U.S.

We concede there is some merit there. After all, smaller companies may be at a disadvantage compared to larger companies, which have more robust operations, stronger balance sheets and enduring profitability. Naturally, larger companies may have more flexibility to create value for shareholders via dividend payments, resulting in more attractive yields.

However, while small-cap investing currently requires a dividend yield sacrifice in the U.S., it can reward with a yield pickup in developed markets.

The yield on DLS is about 30 basis points higher than DOL as of the end of February. Compare that to the U.S., where larger companies (proxied by EPS, the WisdomTree U.S. LargeCap Fund) eclipse the yield of smaller ones (proxied by EES, the WisdomTree U.S. SmallCap Fund), and suddenly there’s an even more compelling case for size investing abroad.

We’d be remiss to ignore the valuation profile of international small-cap value as well. Despite the attention they’ve earned this year, coupled with an impressive performance record, small-cap value stocks around the world still trade at comfortable discounts to their large-cap peers. That tells us that investors are not yet as serious about small caps as they should be, which creates an advantageous opportunity.

Despite their rally to begin the year, both U.S. and developed small-cap value stocks are trading at a 20%–25% discount to large caps on a price-to-earnings (P/E) ratio basis. Similarly, there are even discounts available in forward P/E measurements.

Even with their auspicious start to the year, international small caps are still lagging U.S. small caps, so the inexpensive valuations of the former should reassure you that they may still have room to rally further without fear of overpaying.

In the current market environment, we believe the tables are turning in favor of small caps and value investing as the economy continues to recover.

We’ve made the case before for small-cap investing in the U.S., and we believe now more than ever it’s just as important to consider small-cap allocations abroad. There may be rewards that the rest of the market has not discovered just yet.

Unless otherwise stated, all data is sourced from WisdomTree, FactSet, and Bloomberg, as of 2/28/21.