The embedded risks for investors from conflicts of interest in state-owned enterprises (SOEs) is something we’ve highlighted in recent months. A quantifiable example of this conflict is unfolding right before our eyes and lends some insight into how the market can rapidly re-price this risk.

On Friday, February 19, Brazilian President Jair Bolsonaro removed the head of Petróleo Brasileiro SA (Petrobras), a state-owned Energy company. Bolsonaro argued that CEO Roberto Castello Branco was “not showing commitment to Brazil,” as the country’s economy struggles to keep up with rising gasoline and diesel prices.

The market’s immediate reaction to the replacement of Castello Branco—a University of Chicago-educated economist—with former military general Joaquim Silva e Luna was not favorable. Shares of Petrobras fell more than 25% from Friday’s opening prices. The rest of the Brazilian equity market, which is tracked by the Ibovespa Index, also suffered losses, with other state-owned companies joining Petrobras on the way down. 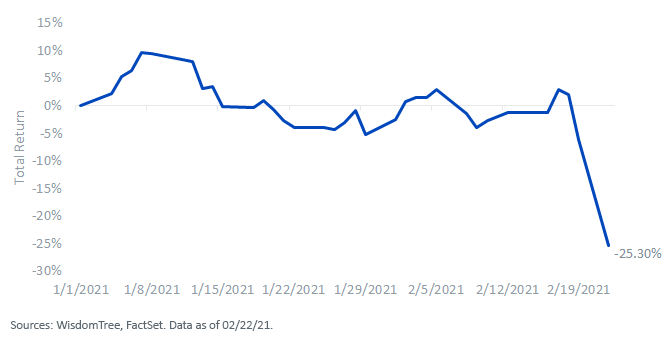 Petrobras is no stranger to political scandal. In 2014, the company was at the center of Operation Car Wash in which the Federal Police of Brazil investigated cases of money laundering at the company. This investigation shook the country and led to the impeachment and removal of then-President Dilma Rousseff.

Importantly, it aims to side-step the risk of owning state-owned companies that can experience a situation like the one we are seeing transpire with Petrobras. Excluding SOEs has also been a significant driver of excess performance since EMXSOE’s inception, resulting in 377 basis points (bps) of annualized outperformance versus the MSCI EM Index. During this period, SOEs in the MSCI EM Index have underperformed non-SOEs by 750 bps and have been a negative contributor to performance.

This is why we believe removing SOEs should be a common approach for  an investor’s core EM exposure.