If you are feeling a speculative vibe in the stock market, let this blog be your warm welcome to the logic and prudence of the WisdomTree U.S. LargeCap Dividend Fund (DLN).

You would think investors would have gotten wise after the dot-com crash. Do you remember the Palm Pilot?

Listen to me: Around the turn of the century, that dinosaur of a gadget with the hideous green interface was the hottest thing in town. Until the year, I had long forgotten about this Blackberry precursor.

3Com, the company that manufactured it, took the Palm unit public with impeccable timing—about a week before the NASDAQ bubble peaked in 2000. Judging by the Palm Pilot that is not in your pocket today, you can imagine how the stock subsequently performed.

But the best part of the Palm IPO story is that its stock price actually traded higher than 3Com’s for weeks on end, even though each share of 3Com was entitled to 1.5 shares of Palm.

Something tweaks in your brain when you vividly remember something like that, and you come across this tweet by Elon Musk last month. Innocent enough:

Tesla’s founder—and the current richest person in the world—was referencing an app that allows you to send secure text messages, which is a big deal now that many people have come to realize the power of the Silicon Valley giants.

In the wake of Twitter’s ban of Trump and many major conservatives, millions flocked to the competitors of the established Silicon Valley brands, be it social media, search or private messaging.

Musk’s tweet came across as a war cry for the Next Big Thing. That was all it took to send the stock of obscure microcap Signal Advance from an intraday low of $0.58 on January 6 to an intraday high of $70.85 on January 11.

But Signal Advance makes medical devices, not text messaging apps. Not only did speculators buy “the wrong stock,” but the Signal that Musk was talking about cannot even have a stock; it’s a nonprofit, funded by donations.

Some investors figured out their blunder and started taking profits. Over two days, Signal Advance cratered from nearly $71 to below $6. On its way back to 58 cents, right? Wrong. Buyers came back.

Buy the dip, I suppose. At one point, it rallied back to $16, though it has subsequently cratered.

Like with the Palm IPO, rubes always arrive when speculative frenzies are in the 11th hour. This would be less concerning if the companies that will go down as this bull market’s leaders were still making new highs, but some of them are struggling.

The S&P 500 looks healthy on the surface, but four of the five FAANGs are making little headway.. 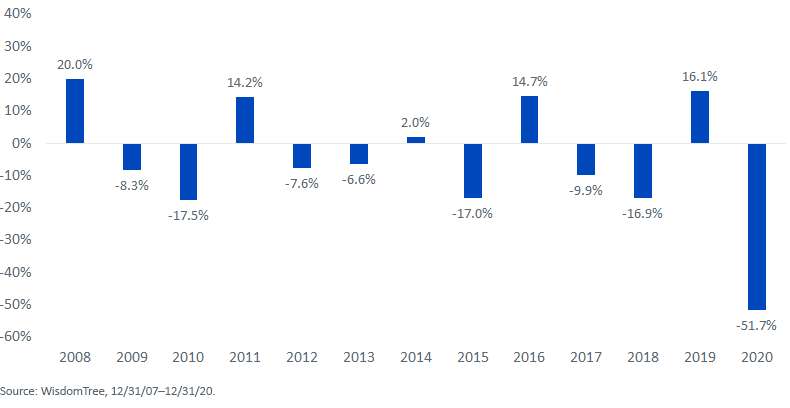 Now the FAANGs are laying an egg, at least in recent days and weeks, but the novices are not wise to the exhaustion in the market’s prior leaders. Maybe they think the bull market will go on forever, so we see goofy developments like what happened with Signal Advance.

Up in large-cap territory, just 6% of the S&P 500 Growth Index fits into the broad market’s top shareholder yield quintile. That Index has 13% of its value in the zero-and-negative shareholder yield group, the portion of the market that skyrocketed in 2020.

Our best-known large-cap value mandate, the WisdomTree U.S. LargeCap Dividend Fund (DLN), has 20% of its holdings in the highest shareholder yield quintile, with another 32% in the second quintile. Less than 5% of the Fund is in the zero-and-negative yielding group that surged in 2020.

Meantime, true WisdomTree acolytes could take it a step further, perhaps pairing the very broad DLN with the more concentrated WisdomTree U.S. Quality Shareholder Yield Fund (QSY). As its name implies, that one screens for the types of stocks that could do well if the green bar chart turns around.

If Signal is this era’s Palm, consider where you are on the growth-value spectrum—and act accordingly.

There are risks associated with investing, including possible loss of principal. Funds focusing their investments on certain sectors increase their vulnerability to any single economic or regulatory development. This may result in greater share price volatility. While QSY is actively managed, the Fund’s investment process is expected to be heavily dependent on quantitative models, and the models may not perform as intended. Please read each Fund’s prospectus for specific details regarding the Fund’s risk profile.