Rallying Behind the Latest Moves in Emerging Markets

Emerging market (EM) equities cooked up a massive rally at the end of 2020, gaining 55% over the last nine months of the year and beating the S&P 500 Index by nearly 8%1.

Much of the market narrative throughout the year was about the growing dominance of U.S. large-cap tech—secular champions whose businesses are the rare beneficiaries of a work-from-home environment. But, although it got little fanfare, ex-state-owned enterprises in emerging markets (EM) managed to outmuscle even the formidable NASDAQ 100 following the market’s rock bottom in March.

WisdomTree’s Model Portfolio Investment Committee entered 2021 with a positive outlook on EM equities. Despite the impressive rally thus far, we have reasons to believe EM can be a strong place for allocators to turn to again in 2021. A few reasons:

Within many WisdomTree ETF Model Portfolios, the anchor position that captures this positive sentiment about EM is a core allocation to the WisdomTree Emerging Market ex-State-Owned Enterprises Fund (XSOE).

Why Avoiding the State Makes Sense

A big outstanding question mark about the asset class is the political tension between China and the U.S. While the Biden administration is likely to be more predictable in its dealings with foreign leaders, there is bipartisan support for a tough stance with China in the aftermath of the COVID-19 pandemic and the growing number of restrictions on Hong Kong.

While these political tensions are hard to predict, taking an non-state-owned approach can help mitigate this risk. On November 12, 2020, outgoing President Donald Trump announced Executive Order (EO) 13959, banning U.S. investors from investing in securities identified by the Department of Defense as Communist Chinese military companies (CCMCs).

XSOE did not hold any of the initial 35 CCMCs or their subsidiaries listed in the scope of this EO, as they were previously identified as state-owned enterprises and screened out.

Market benchmarks like the MSCI EM Index and the FTSE Emerging Index were forced to drop close to 20 CCMCs representing around 1.1% of their market cap weights. Indexes tracking the Chinese market like the MSCI China and the FTSE China 50 where the most affected by EO 13959 as they were forced to drop CCMCs nearing 3% and 8% of their respective weights.

The Bottom Line on Performance

Investors love hearing stories and narratives to craft an investment thesis, but ultimately the proof is in the performance. And while these newly sanctioned companies may now represent a business liability, these and other state-owned stocks have been laggards for quite some time.

SOEs have been dead money since 2007, remarkably still underwater from that level and having lost 1.2% per year. On the flipside, non-SOEs have outperformed their state-run counterparts by 5% per year5.

Having harnessed this structural governance advantage, XSOE has a performance pedigree worth bragging about.

Across both universes of EM mutual funds and ETFs, XSOE ranked in the top quartile in 2020—precisely as it has done over the trailing three-year, five-year and since-inception time periods.

Performance of SOEs vs. Non-SOEs 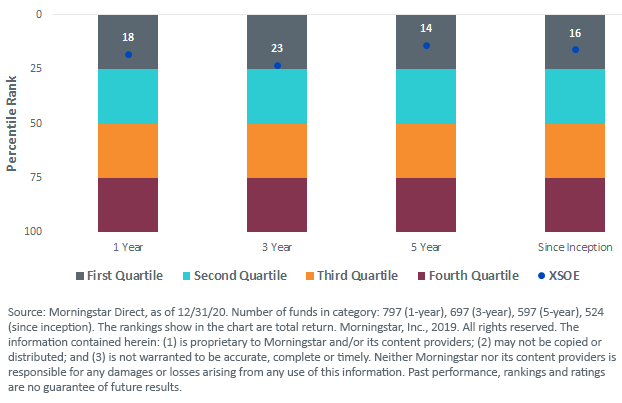 Know the Role that EM Plays in a Portfolio

That said, XSOE may be the people’s champion. The only fund that saw more inflows than XSOE achieved more than half of its entire year’s flows in just five trading days, implying a small number of buyers were responsible for much of the fund’s popularity. XSOE, on the other hand, was a consistent investor favorite throughout the year, with 78 days of inflows and zero days of outflows6.

The Fund’s widespread appeal to advisors, institutions and retail investors alike is a major reason that it was WisdomTree’s top flow gatherer in 2020.

Coming into 2021, investors have no shortage of potential ideas fighting for capital within a portfolio. For those who wish to be aligned with the thought leaders at WisdomTree, XSOE should be a strong contender to act as the anchor of any EM allocation.