Taking SOE Risks Off the Table

The belief that state-owned enterprises (SOEs) are safer investments than ex-state-owned companies (ex-SOEs) because they have government backing is anything but certain.

We sometimes hear this safety argument from clients. The thesis is compelling—because SOEs have implicit (or explicit) government support, they have a lifeline when times get tough and they need easy access to credit.

While we do not disagree with this argument per se, there is a powerful counterargument to this “government lifeline” thesis.

State-owned enterprises typically have an inherent conflict of interest as they often look to (or are forced to) promote the government’s objectives at the expense of creating value for other shareholders. This is often referred to as a “national service” requirement of SOEs.

Taking SOE Risks Off the Table

WisdomTree’s ex-State-Owned Enterprises Indexes—EMXSOE and CHXSOE—seek to give investors broad exposures to the emerging markets and Chinese markets, respectively, favoring non-SOEs and reducing the exposure to those companies that can be subject to these conflicts of interest.

WisdomTree conducted the annual reconstitution of these ex-State-Owned Enterprises Indexes in October.

The most notable update is that one of the largest holdings in both EMXSOE and CHXSOE is the Hong Kong-listed share of Alibaba Group, switching from the previously held ADR. As noted before1, potential delisting of Chinese ADRs isn’t a material risk to these Indexes, as Hong Kong listings for these are becoming more liquid and will provide an alternative if needed.

Here’s a recent example of controversy surrounding SOEs and highlights from the most recent reconstitution of EMXSOE and CHXSOE.

A good example of SOEs not seeking to maximize shareholder value can be seen in China’s four largest banks: Bank of China, Industrial and Commercial Bank of China (ICBC), China Construction Bank and Agricultural Bank of China.

It is well known that these banks service national obligations and are charged with distributing loans to keep employment and GDP growing within the government’s objectives.

The chart below, shared by Bloomberg anchor David Ingles, shows how implementing the government’s objectives can translate into operating complications for these financial institutions.

Non-performing loans (NPLs), loans in which the borrower has defaulted on its obligations, have increased at an alarming rate in each of these bank’s loan books. We can see how economic difficulties experienced by Chinese businesses during 2020 have translated into NPLs reaching almost 1 trillion yuan—this can be a looming problem if the economy does not improve quickly. 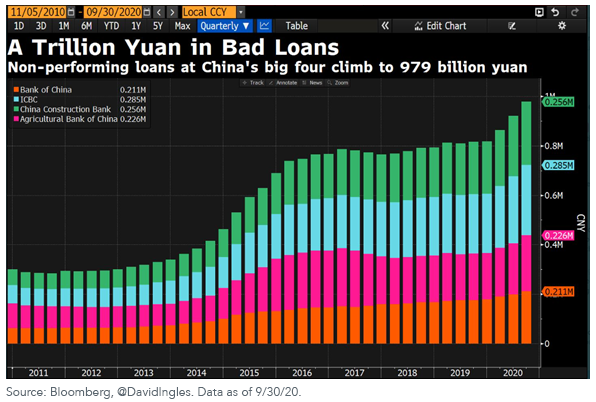 After reconstitution, EMXSOE’s country exposure was reset to match its starting universe, while its sector tilts continue to over-weight Consumer Discretionary and Information Technology and under-weight Financials and Energy.

The reconstitution did not affect the portfolio’s fundamentals significantly. EMXSOE still has a higher implied growth rate (return on equity x earnings retention), profitability metrics and lower leverage than the MSCI EM Index.

CHXSOE pared some of its sector tilts during reconstitution but remains over-weight in the Information Technology and Health Care sectors, while being under-weight in Energy and Financials with respect to the MSCI China Index.

Alejandro Saltiel joined WisdomTree in May 2017 as part of the Quantitative Research team. Alejandro oversees the firm’s passive indexes and is involved in the design and analysis of new and existing strategies. Alejandro leads the quantitative analysis efforts across equities and alternatives and contributes to the firm’s website tools and model portfolio infrastructure. Prior to joining WisdomTree, Alejandro worked at HSBC Asset Management’s Mexico City office as Portfolio Manager for multi-asset mutual funds. Alejandro received his Master’s in Financial Engineering degree from Columbia University in 2017 and a Bachelor’s in Engineering degree from the Instituto Tecnológico Autónomo de México (ITAM) in 2010. He is a holder of the Chartered Financial Analyst designation.