It’s Not Just the Rust Belt: Keep Your Eye on the Southwest for the Election

This is the third of a three-part blog post series. Part one lays out why COVID-19 can affect the growth versus value decision . Part two discusses Florida, the hotly contested swing state. Here, we discuss the battle for the Southwest.

Do not get lulled into focusing on just Ohio, Wisconsin and the rest of the Rust Belt. We need to talk about the southwestern swing states.

Figure 1 shows the state-by-state pricing for victory by both Biden and Trump on PredictIt, the marketplace for event futures.

At extremes are solidly “blue” states like New York, where Biden contracts cost 94 cents, paying off a six-cent profit when it expires at one dollar upon the Democratic challenger’s taking of New York. On the other extreme, Wyoming, where it costs 97 cents to lay money on Trump taking that state. A three-cent profit looms “if” Trump takes it. 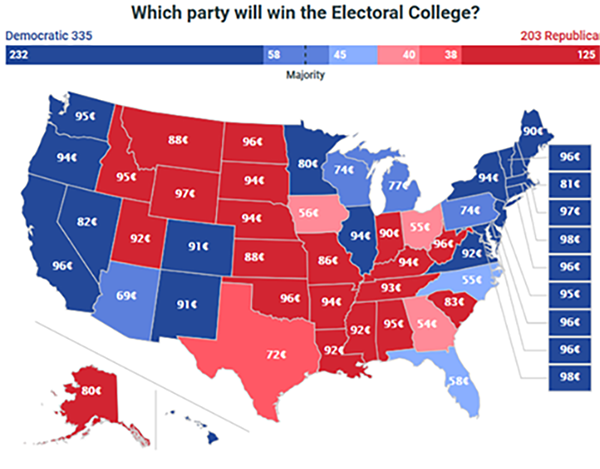 If you think about sectors and asset classes in a Biden versus Trump framework, we keep coming back to the Energy and Financials sectors. Energy is easy enough: a Biden win means a push into alternatives such as solar and geothermal, while Trump is the oil guy. In Financials, Biden is the “reign in Wall Street” candidate, while Trump represents the status quo.

Those two sectors are critical, because they populate value indexes in size (figure 2). 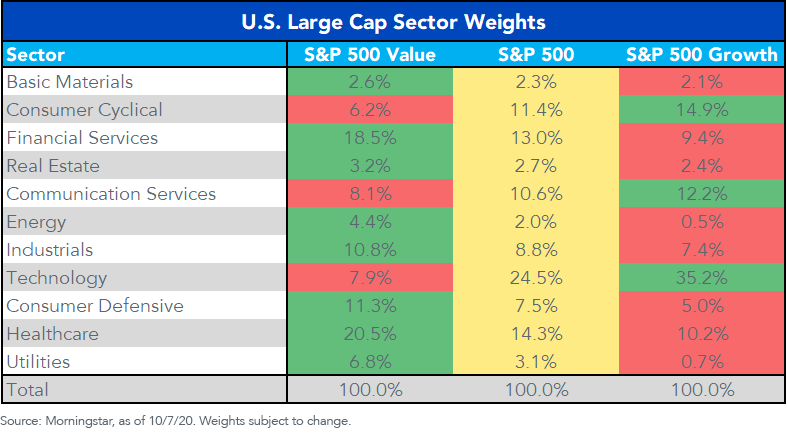 Election “Kremlinology” focuses so much on states like Florida, North Carolina and Michigan that it is easy to divert our eyes from what the market believes are two southwestern states that Biden will capture: Arizona and Nevada. At 69% and 82% probabilities, respectively, Biden cannot be faulted for taking his eye off them when there is work to do in the Midwest and East.

But in Nevada, Biden has two forces working against him: first, recent violence on the Las Vegas Strip has gotten national attention, playing into Trump’s “law and order” pitch.

Secondly, Nevada’s COVID-19 hospitalizations have more than halved since early August (figure 2), lifting the urgency for a vaccine and perhaps alleviating some of the public’s sense of helplessness. 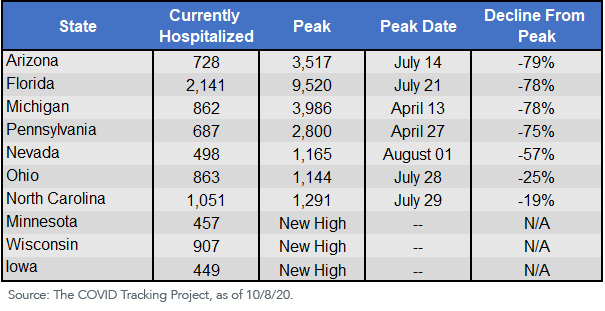 If Nevada, which Hillary Clinton took by 2.4 points, ends up being a surprise Trump victory, Arizona will probably tag along, for a few reasons.

Also, like in Nevada, it appears the worst of the COVID-19 hit may be in the rearview mirror. The state’s daily death and case counts have fallen sharply, though the latter has started to rise again in recent weeks. Nevertheless, with cases leading mortality by 3–4 weeks, it is possible Arizona’s 7.3 million residents could witness single-digit daily deaths before November 3.

If both states go red this time around—which is not at all the Street’s base case—you have to entertain a thesis where the Republicans retain the Senate and perhaps even take back the House, though the latter is a long shot with 11% probability. Any combination of these outcomes would divert U.S. equity eyes toward Financials and Energy, the two sectors that would benefit most from a swing to the GOP.

This means value stocks. So, make sure to keep an eye on the Southwest. If Arizona and Nevada go for Trump, he is probably looking at reelection.

If Biden prevails, two ideas are the WisdomTree Cloud Computing Fund (WCLD) and the WisdomTree Growth Leaders Fund (PLAT). They are the opposite side of the Energy and Financials trade because of their tech orientation.

There are risks associated with investing, including possible loss of principal. Funds focusing their investments on certain sectors, such as DLN and EPS, increase their vulnerability to any single economic or regulatory development. This may result in greater share price volatility.

Foreign investing involves special risks, such as risk of loss from currency fluctuation or political or economic uncertainty; these risks may be enhanced in emerging, offshore or frontier markets. Technology platform companies have significant exposure to consumers and businesses, and a failure to attract and retain a substantial number of such users to a company’s products, services, content or technology could adversely affect operating results. Technological changes could require substantial expenditures by a technology platform company to modify or adapt its products, services, content or infrastructure. Technology platform companies typically face intense competition, and the development of new products is a complex and uncertain process. Concerns regarding a company’s products or services that may compromise the privacy of users, or other cybersecurity concerns, even if unfounded, could damage a company’s reputation and adversely affect operating results. Many technology platform companies currently operate under less regulatory scrutiny, but there is significant risk that costs associated with regulatory oversight could increase in the future. PLAT invests in the securities included in, or representative of, its Index regardless of their investment merit, and the Fund does not attempt to outperform its Index or take defensive positions in declining markets. The composition of the Index is heavily dependent on quantitative and qualitative information and data from one or more third parties, and the Index may not perform as intended.