Will the COVID-19 News Cycle Shift the Election?

This is the second blog post of a three-part series. In part one, I laid out how the COVID-19 situation affects the value versus growth decision. Now let’s talk about the swing states.

Unlike in prior election cycles, the creation of “event futures” markets allows us to pinpoint the public’s perception of candidates’ chances.

Right now, people are exchanging real money on PredictIt, the Internet exchange, trying to profit off the presidential election. As of October 2, Biden’s contract trades at 63 cents, so a victory for the Democrat pays $1, while a loss sends you packing. Trump contracts cost 38 cents (the two do not sum to 100 cents because of bid/ask spreads). So Biden has a clear lead. Interestingly these contracts did not change much upon Trump's announcement that both he and First Lady had contracted the virus themselves.

Let’s game out a fading Biden scenario that benefits “Trump trades”—namely the Energy and Financials sectors, both of which populate value indexes in size.

Recall that COVID-19 first hit New York City, Connecticut and New Jersey. Nearby Massachusetts famously had its “super spreader” event: a Biogen conference, one of the last big meetings before we all locked down.

As spring turned to summer, the COVID-19 news cycle moved to new “flare-up” zones: California, Arizona, Texas, Florida and North Carolina. Outside of solidly-for-Biden California, the other four are swing states.

Focus on Florida’s 29 big electoral college votes, which I think could go to Trump in his quest for 270 if that state’s coronavirus situation improves in these final weeks. PredictIt’s marketplace is pricing Biden’s Florida probability at 52%, so it’s a virtual coin toss (figure 1). 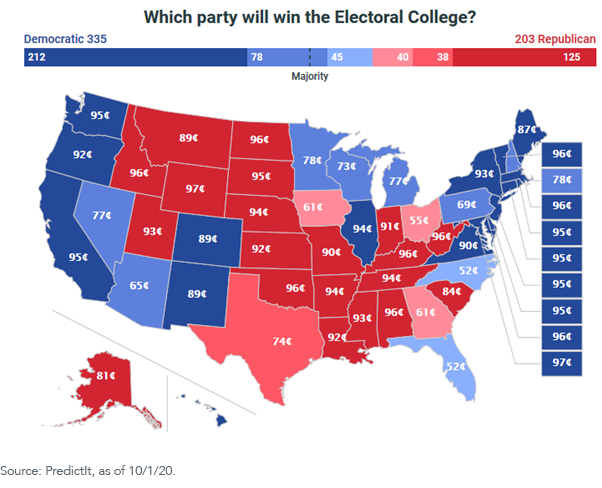 Favoring Trump is Florida’s declining daily COVID-19 death toll. While the seven-day moving average got close to 200 on the first day of August, it has since fallen to 93. Along with it, Biden’s 64% PredictIt price in Florida fell to 52%.

Correlation or coincidence? We cannot know for sure. But I think this election boils down to something like this:

No Second Wave or a Moderate October = Trump Victory

With Republican governor Ron DeSantis the face of “opening it up,” the trajectory of the blue line in figure 2 favors the GOP if it keeps heading down.

Figure 3 shows the five summer headline states, along with the states and countries that were hit in the initial COVID-19 strike. If Florida—along with Texas and Arizona—continues to see COVID-19 severity wane, do undecided voters in those states shift toward Trump? And will North Carolina, which had a rough September, in turn go to Biden? 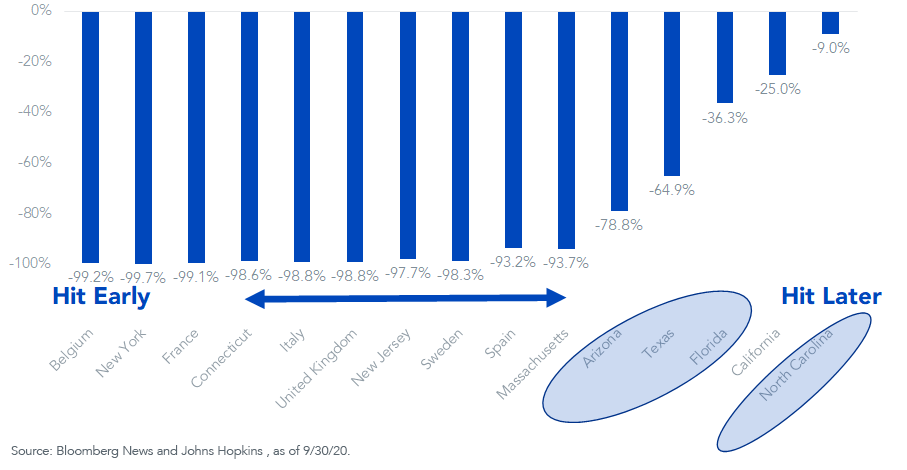 Suppose Trump comes from behind and wins. I think that benefits the Financials sector relative to the broad market. When he cut the corporate tax rate from 35% to 21%, it was the banks that saw one of the biggest earnings boosts because many pay something close to the statutory tax rate. Take Biden’s corporate tax increase proposal off the table and suddenly the sector has reason to smile.

Additionally, the second choice for Biden’s Treasury Secretary, behind Lael Brainard of the Federal Reserve, is Massachusetts senator Elizabeth Warren. Should Biden give a hat tip to his base by selecting the senator, it is critical to note that one of her initiatives includes a financial transactions tax; every stock, bond and derivative trade would send a penny or two to the Treasury, potentially hindering market liquidity. If we take that prospect off the table, banks would feel relief.

Outside of Financials, how about Big Oil? There is no bigger climate skeptic in the developed world than Trump. Send him back for a second term and you have to think that gives the group a catalyst to outperform.

With Energy and Financials populating value indexes, that leaves this:

If you’re thinking Trump for value, the WisdomTree U.S. LargeCap Fund (EPS) is overweight in Financials in its 500-stock allocation. If an overweight in Energy is your play for a Trump surprise, maybe something like the WisdomTree U.S. LargeCap Dividend Fund (DLN) is the angle. While the S&P 500’s Energy weight has withered to 2%, DLN has 7% in the sector.

There are risks associated with investing, including possible loss of principal. Funds focusing their investments on certain sectors, such as DLN and EPS, increase their vulnerability to any single economic or regulatory development. This may result in greater share price volatility.

Foreign investing involves special risks, such as risk of loss from currency fluctuation or political or economic uncertainty; these risks may be enhanced in emerging, offshore or frontier markets. Technology platform companies have significant exposure to consumers and businesses, and a failure to attract and retain a substantial number of such users to a company’s products, services, content or technology could adversely affect operating results. Technological changes could require substantial expenditures by a technology platform company to modify or adapt its products, services, content or infrastructure. Technology platform companies typically face intense competition, and the development of new products is a complex and uncertain process. Concerns regarding a company’s products or services that may compromise the privacy of users, or other cybersecurity concerns, even if unfounded, could damage a company’s reputation and adversely affect operating results. Many technology platform companies currently operate under less regulatory scrutiny, but there is significant risk that costs associated with regulatory oversight could increase in the future. PLAT invests in the securities included in, or representative of, its Index regardless of their investment merit, and the Fund does not attempt to outperform its Index or take defensive positions in declining markets. The composition of the Index is heavily dependent on quantitative and qualitative information and data from one or more third parties, and the Index may not perform as intended.