“Getting MySpaced.” It’s the existential fear of every social media company.

One day your portal is the coolest game in town. The next it goes the way of MySpace, the precursor to Facebook.

Yes, there is more to Facebook in 2020—Instagram and WhatsApp are in its portfolio—but are those somehow immune to being MySpaced?

Facebook also dabbles in other businesses, such as Oculus VR, the virtual reality venture. But CEO Mark Zuckerberg plunked out just $2.3 billion for it in 2014, an amount that hardly makes a dent in a $744 billion company, the fourth largest in the S&P 500.

Two years ago I thought the #DeleteFacebook trend in the wake of the Cambridge Analytica scandal would prove its undoing, or at least its defenestration. I thought that the rest of the public had internalized Orwell’s 1984 warnings as I had.

The U.S. social media giants have—or maybe had—a risk in the form of TikTok, the Chinese platform known for teens and tweens doing silly dance routines. Though the appeal of the concept is lost on my MTV and VH1 sensibilities, TikTok’s two billion global downloads is testament to its reach.

Now TikTok is embroiled in scandal. Amid the West’s rejection of China’s Huawei in the build-out of 5G infrastructure has come greater awareness that the Communist Party’s reach extends across the tech world. Concern about Beijing’s espionage has turned eyes to TikTok’s treasure trove of information on our children. Here is what comes up in a Google search for “TikTok Data.” 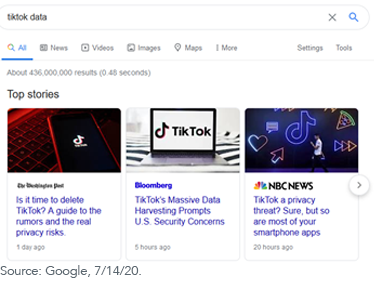 See that NBC News headline on the right?

With Washington focusing on TikTok’s data gathering, it is hard to see how Facebook, Twitter, Uber or anyone else in Silicon Valley will get off scot-free.

There is a saying that often makes the rounds whenever talk turns to Facebook:

On Twitter and Facebook, reasoned argument loses to the loudest voice, the most radical. In the early days, we thought the Internet would prove a libertarian bonanza. Yet here we are in 2020, social divisions as deep as ever, cancel culture eating people at random, fed by everyone’s knowledge that the easiest way to strike a nerve isn’t to move the Overton window but to shatter it.

Anything for the dopamine rush of “likes” and retweets. A viral post is the modern-day slot machine.

We are 20-some-odd years into this mass communication experiment. Reasoned argument, logic, statistics? They go into a vacuum, typed into a void of zero Facebook likes, zero Twitter retweets.

I have news: the GOP, if it holds any power come November, is not going to simply stop citing Section 230 of the Communication Decency Act. It states that “No provider or user of an interactive computer service shall be treated as the publisher or speaker of any information provided by another information content provider."

That means you can host a social media platform, let everyone yell at each other and do what they do, but the moment you start deciding what can and cannot be said, you lose immunity from lawsuits.

And in a litigious society, where you can trip over a pebble in someone’s driveway and have a jury award you a cool million, the general public filing lawsuit after lawsuit against Facebook and its ilk is an existential business risk.

Facebook had revenues of $70.7 billion in 2019, resulting in $8.6 billion in profits. Its market cap is $714 billion. A lot of money is at stake. As I see it, the company and its peers may have sleepless nights over these four issues:

There is more, such as Uncle Sam’s coming tax grab, but for now I will stop here.

Here is Facebook’s weight in WisdomTree’s U.S. Large Cap Funds. For Facebook bulls, maybe the WisdomTree Growth Leaders Fund (PLAT) is the angle. For the bears, several of “the Ds,” which have zero exposure to the firm. 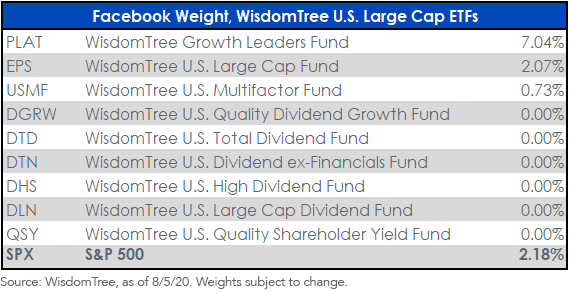 For PLAT: Foreign investing involves special risks, such as risk of loss from currency fluctuation or political or economic uncertainty; these risks may be enhanced in emerging, offshore or frontier markets. Technology platform companies have significant exposure to consumers and businesses and a failure to attract and retain a substantial number of such users to a company’s products, services, content or technology could adversely affect operating results. Technological changes could require substantial expenditures by a technology platform company to modify or adapt its products, services, content or infrastructure. Technology platform companies typically face intense competition and the development of new products is a complex and uncertain process. Concerns regarding a company’s products or services that may compromise the privacy of users, or other cybersecurity concerns, even if unfounded, could damage a company’s reputation and adversely affect operating results. Many technology platform companies currently operate under less regulatory scrutiny but there is significant risk that costs associated with regulatory oversight could increase in the future. The Fund invests in the securities included in, or representative of, its Index regardless of their investment merit and the Fund does not attempt to outperform its Index or take defensive positions in declining markets. The composition of the Index is heavily dependent on quantitative and qualitative information and data from one or more third parties and the Index may not perform as intended.

For all other Funds listed: Funds focusing their investments on certain sectors increase their vulnerability to any single economic or regulatory development. This may result in greater share price volatility. Due to the investment strategies of the Funds, they may make higher capital gain distributions than other ETFs. While the Funds are actively managed, the Funds’ investment processes are expected to be heavily dependent on quantitative models and the models may not perform as intended.

There are risks associated with investing, including the possible loss of principal.