With all that has happened thus far in 2020, it’s easy to forget that, technically, the Federal Reserve’s (Fed) current easing cycle actually began exactly a year ago! Yes, indeed—at the July 2019 FOMC meeting, the policymakers implemented their first rate cut, essentially reversing the very unpopular rate hike that was implemented at the end of 2018. Now here we are, 12 months later, with a zero interest rate policy, revamped quantitative easing (QE) and a whole new array of balance sheet facilities to ward off another potential financial crisis, support the money and bond markets and, of course, hopefully provide stimulus for the economy. Against this backdrop, it should come as no surprise the Fed decided to take a bit of a summer vacation at this July FOMC gathering. 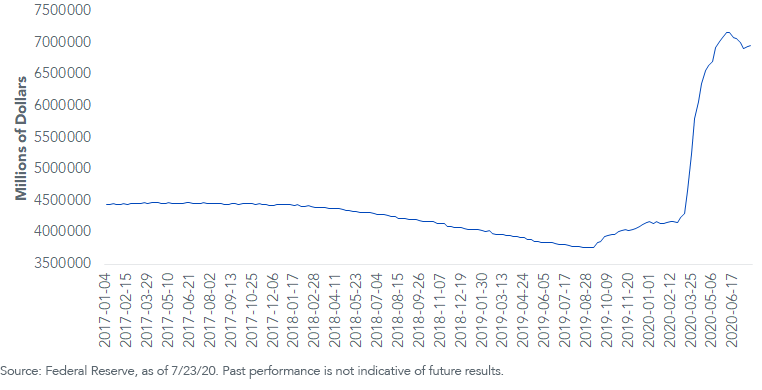 Looking at recent developments regarding the Fed’s balance sheet, one gains some insight as to perhaps why the policymakers are just “letting things be” for now. After a fast and furious start, the balance sheet had actually been shrinking for a four-week period before some modest increases the last two weeks.

Let’s give it some perspective. Between February 26 and June 10, total assets rose by an unbelievable $3.0 trillion, but 92% of this expansion took place before mid-May. Since then, the balance sheet has risen by “only” about $31.0 billion; a period, of course, that includes the aforementioned shrinkage. Keep in mind, total assets still stand at just under $7.0 trillion!

These balance sheet developments are actually “good news.” Why? Because a) they show that the Fed looks like it avoided another financial crisis, and b) the money and bond markets have apparently gotten to the point that major doses of Fed support are not needed.

Bottom line: Just because the voting members didn’t enact any new policy stimulus, it doesn’t mean the sunscreen has been applied and it’s time for a nap at the beach. Quite the contrary. Chairman Powell & Co. continue to remain concerned about the uncertain outlook, with the recent “one step forward, two steps back” pandemic occurrence here in the U.S. no doubt getting their attention. The Fed is going to remain in accommodative mode for the foreseeable future and will be looking to implement tools such as “target-based” forward guidance where they could very well let “things run hot,” as compared to prior policy episodes.

Unless otherwise stated, all data sourced is Federal Reserve, as of July 23, 2020.