A Preview of the Earnings Season

On last week’s Behind the Markets podcast we spoke with David Trainer, CEO of New Constructs, about the upcoming earnings season and how his measure of core earnings compares to the standard measures of earnings reported.

Trainer’s team recently published the piece “Don’t Fret 2Q Earnings: This S&P 500 Will Continue to Rise.” Trainer highlights how an elevated level of write-downs, which occur when the fair value of an asset falls below its balance sheet value, is distorting and increasing the volatility in reported earnings.

Trainer believes that S&P 500 reported earnings are understated relative to New Constructs’ measure of core profitability. Specifically, according to New Constructs, core earnings for the S&P 500 over the last 12 months show a 2% fall since 2019, while consensus predicts a 22% fall.

While the S&P’s operating earnings are less noisy than traditional GAAP (Generally Accepted Accounting Principles) earnings, there is still lower variability in the New Constructs Core Series going back over the last 15 years, particularly during the global financial crisis in 2009.

This quarter coming up will likely have the biggest distortions of this cycle, so it will be interesting to keep tabs on what the New Constructs data series looks like. 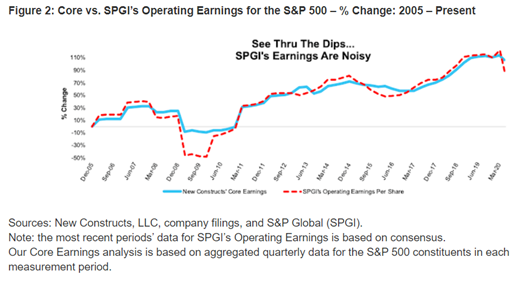 One segment of the market that has been particularly impacted in both market performance and earnings deterioration in 2020 has been small-cap companies.

Kara Marciscano, Senior Analyst on our index team, discussed the trends in small-cap earnings on our podcast.

Small caps have more unprofitable companies than ever present; more than 20% of the Russell 2000 is regularly unprofitable.

Marciscano looked at the higher-quality S&P 600 Index—which typically has significantly less exposure to unprofitable companies. But even S&P 600 GAAP earnings moved into negative territory in the trailing 12 months, driven by a large loss in Q1 2020 that offset earnings in the prior three quarters.

The 1Q 2020 loss presented by GAAP earnings would be one of the worst quarters for small-cap companies since the financial crisis—it is more than double the size of the GAAP loss in 4Q 2008. This upcoming earning season is apt to be even more negative, as Q1 only had a few weeks of economic shutdown, while Q2 was largely completely shut down.

To put the size of the 1Q 2020 GAAP loss into perspective, it was large enough to wipe out earnings over the preceding nine quarters, or more than two years’ worth of earnings.

Adjusted measures of earnings paint a difficult, but not nearly as disastrous, quarter for small caps. Both S&P operating earnings and New Constructs’ core earnings indicated that small caps were profitable in the trailing 12 months.

Based on New Constructs’ S&P 600 core earnings, which leverage cutting-edge technology to adjust reported earnings for unusual gains/losses buried in the footnotes of financial filings, Marciscano estimates small-cap core earnings decreased approximately 25% since the end of 2019 but are still in profitable territory.

The difference between the GAAP and New Constructs’ core earnings is a function of the direction and magnitude of adjustments that New Constructs makes to reported GAAP earnings.

Directionally, upward adjustments to S&P 600 earnings have occurred more frequently than downward adjustments over the last 12 months. Based on New Constructs’ data, approximately 56% of the S&P 600 exposure had understated GAAP relative to their measure of core profitability, while the remaining 44% had GAAP earnings that were overstated. 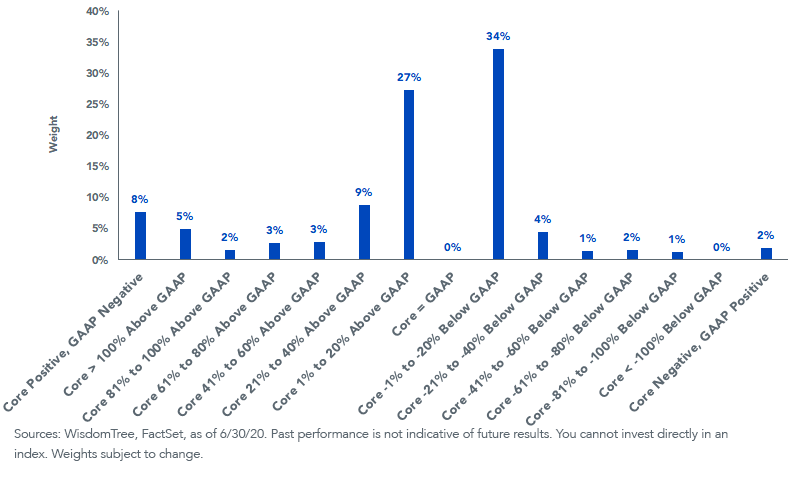 Marciscano’s analysis implies that the fall in small-cap earnings may be less severe than other measures of earnings have presented. Looking ahead, Marciscano emphasizes the importance of looking beyond reported measures of earnings to evaluate the pace of decline and eventual recovery in earnings, especially in this uncertain economic environment.

Please listen to our full podcast with Trainer on this upcoming earnings season below.

Behind the Markets on Wharton Business Radio · Behind The Markets Podcast: David Trainer

Unless otherwise stated, data sources are WisdomTree, FactSet and S&P Global, as of June 30, 2020.