As investors continue to sort through the aftermath of the bond market turmoil we witnessed in March, questions arise as to where there are potential relative value opportunities. The first sector that comes to mind is U.S. high-yield (HY) corporate bonds…you might say this is where I have high hopes.

I’ll be the first to admit that a great deal of uncertainty remains in the fixed income investment landscape. However, I find myself in pretty close alignment with the Federal Reserve’s (Fed) on the economic outlook. That is, acknowledging the uncharted territory we find ourselves in, yet coming to the conclusion that a reasonable scenario exists for an elongated ‘U-shaped’ recovery. Check the econ box off in favor. 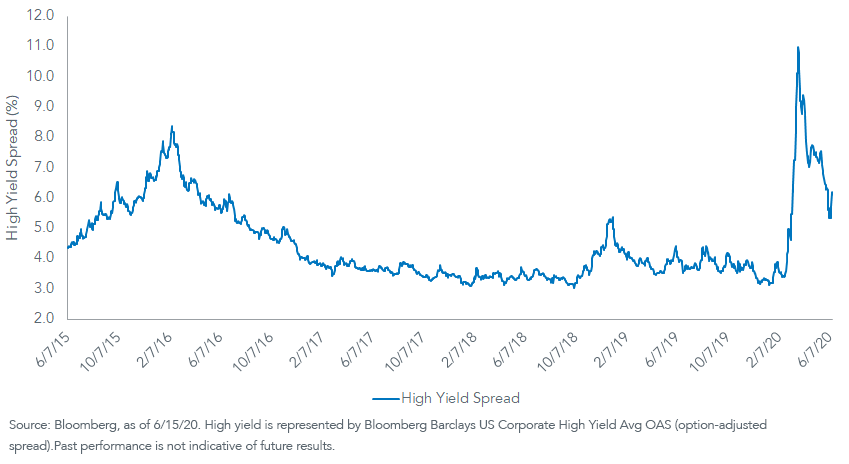 What about spread levels? The graph clearly illustrates the degree of the sell-off that occurred during March. In fact, HY experienced its worst two-week period during the mid to latter portion of that month. As a result, HY spreads rose 750 basis points (bps) to +1,100 bps, the second-highest level on record. This widening was only eclipsed by the global financial crisis, and as you can clearly see, this year’s widening was far greater than the early 2016 and late-2018/early-2019 episodes.

Since the tumultuous selling in March, the U.S. HY sector has reversed course with spreads narrowing by roughly 500 bps as of this writing. In other words, spreads have retraced 65% of their widening from the peak that was registered on March 23. While this is certainly good news, I feel U.S. HY corporates still have room for further improvement. Additional spread narrowing is expected, but it may not be as straightforward as the decline up to now has been. Indeed, prior to the March sell-off, HY spreads were trading in the +300 bps to +400 bps range. For the record, as of this writing, the differential was +611 bps. As you can see, there is ample room for improvement. Check the spread box in favor.

The Federal Reserve has opened its Secondary Market Corporate Credit Facility (SMCCF) and has begun making U.S. corporate bond purchases to its balance sheet. The amounts thus far have been rather modest in relative terms, but the Fed has plenty of firepower at its disposal if needed. In fact, you can make the case the amounts have been relatively small up to now because the policymakers feel conditions don’t warrant a more aggressive approach. Check the Fed policy box in favor.

Bottom line: While we see potential value and income opportunities in the U.S. HY corporate market, screening for quality is of paramount performance. The WisdomTree U.S. High Yield Corporate Bond Fund (WFHY) could provide a “core plus” solution that meets this goal. The WisdomTree Interest Rate Hedged High Yield Bond Fund (HYZD) also provides an avenue into HY, but with the potential to manage interest rate risk and screen for quality.

Unless otherwise stated, data source is Bloomberg, as of June 12, 2020.

There are risks associated with investing, including possible loss of principal. Fixed income investments are also subject to credit risk, the risk that the issuer of a bond will fail to pay interest and principal in a timely manner, or that negative perceptions of the issuer’s ability to make such payments will cause the price of that bond to decline. High-yield or “junk” bonds have lower credit ratings and involve a greater risk to principal. Fixed income investments are subject to interest rate risk; their value will normally decline as interest rates rise.  HYZD seeks to mitigate interest rate risk by taking short positions in U.S. Treasuries (or futures providing exposure to U.S. Treasuries), but there is no guarantee this will be achieved. Derivative investments can be volatile and these investments may be less liquid than other securities, and more sensitive to the effects of varied economic conditions.

HYZD may engage in “short sale” transactions where losses may be exaggerated, potentially losing more money than the actual cost of the investment and the third party to the short sale may fail to honor its contract terms, causing a loss to the Fund. While HYZD and WFHY attempt to limit credit and counterparty exposure, the value of an investment in the Funds may change quickly and without warning in response to issuer or counterparty defaults and changes in the credit ratings of the Fund’s portfolio investments. Due to the investment strategy of HYZD, the fund may make higher capital gain distributions than other ETFs.  Please read each Fund’s prospectus for specific details regarding the Fund’s risk profile.