A Strategy for Volatile Markets

In this post, we focus on how a specific type of option strategy employed in the WisdomTree CBOE S&P 500 PutWrite Strategy Fund (PUTW) seeks to enhance portfolios during these volatile markets.

PUTW seeks to track, before fees and expenses, the price and yield performance of the Cboe S&P 500® PutWrite Index (PUT Index). The PUT Index includes a strategy of writing at-the-money puts on a monthly basis.

You can think of a put option as an insurance contract. The writer plays the part of the insurer, who charges the owner a premium to ensure the price of their underlying asset if it were to fall below the strike price agreed upon in the contract.

“At the money” means the strike price agreed to on these contracts is equal to the current price of the S&P 500.

Options written by the PUT Index settle on the day of expiration. There are two potential outcomes, dependent on the price of the S&P 500:

On April 18, 2019, this strategy wrote a put expiring one month later (May 17) with a strike price of 2,895, collecting at a premium of $29.40 per contract, equivalent to 1.02%. The below hypothetical payoff diagram shows the potential outcomes at expiration. If the price of the S&P 500, shown in the horizontal axis, finishes above 2,895, the PUT Index will keep the $29.40 it collected, realizing a return of 1.02%. The upside for this contract will be capped at 1.02% regardless of a potentially larger positive move in the S&P 500. 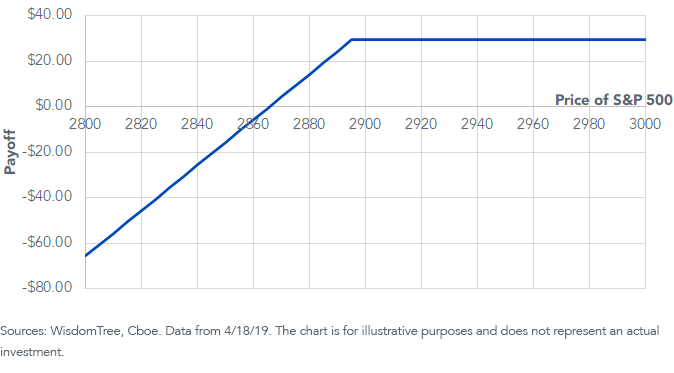 If the price of the S&P 500 is below 2,895, the PUT Index will need to pay the difference between the strike price and the current price of the underlying asset.

The Role of Market Volatility

Think of it like a traditional homeowner’s insurance policy. The premium charged to a homeowner living in a coastal region to insure their home against flooding damage would be higher than one charged to a homeowner living in the mountains. And the one-time premium charged by the insurance company would be higher if the coverage lasts for two hurricane seasons compared to only one.

The PUT Index is a rules-based strategy, so most of the variables that determine the price of these put contracts—like time to maturity and strike price (as a % of the underlying asset)—remain constant month to month. The biggest driver in determining the contract’s premium is the probability that the S&P 500 Index dips below the strike price. This probability is greater as volatility in the markets increases. The most used market gauge to measure volatility is the VIX Index (VIX).

As we see below, the premium collected by the PUT Index (as a percent of the strike price) increases when market volatility increases.

Looking at the past 12-plus years of data, we can approximate the percentage of monthly premium collected to be close to the level of the VIX divided by 10. 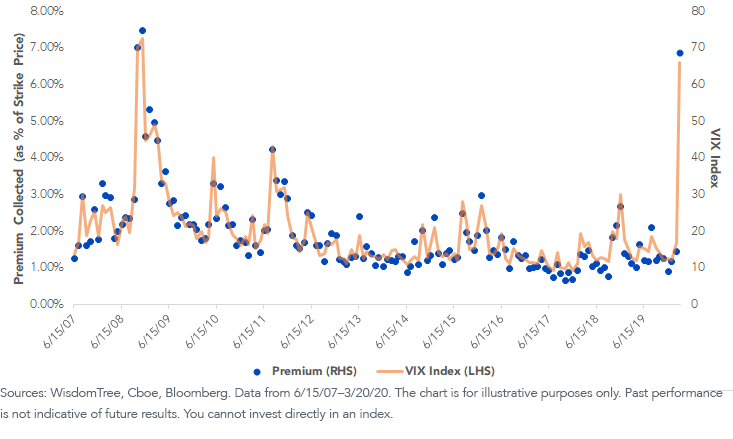 A put-writing strategy relies on the premium collected, which is typically measured as a percentage of the strike price.

For example, the strategy wrote a put on the S&P 500 with a strike price of 2,450 on March 20, 2020, and collected a $168.50 premium—equivalent to 6.88%—a level not seen since the financial crisis in 2009. This 6.88% represents the shock absorbent the strategy will have in case the S&P 500 falls over the next month, and it also represents the maximum return the strategy could experience before writing its next put option.

Put-Writing in Periods of Volatility

Both the upside capture (which is limited to the premium collected) and downside mitigation (a higher premium gives the writer a larger shock absorber in case the price of the underlying asset falls below the strike price) of a put-writing strategy depends on the percent of premium collected when writing the options. So, the strategy underlying the PUT Index tend to work best in periods of higher market volatility.

Below, we see how relative performance between the S&P 500 and PUT Index has been driven primarily by the total premium collected in a given year, which in turns depends on the average level of the VIX.

For example, 2008 and 2009 were some of the best relative performance years for the PUT Index, and also years when the market experienced both significant downturn and recovery. This relative outperformance can be explained by the fact that during those years, the PUT Index collected a total of 42% and 39% in premiums respectively, giving the strategy an increased cushion in the downside and also capping the upside at significantly high levels.

On the other hand, 2017 was a year in which the PUT Index trailed the S&P 500 by more than 10%. It was also a year with the lowest volatility exhibited in recent history, measured by both the VIX and market standard deviation. The premium collected by the PUT Index in 2017 was equivalent to 11.07%, so its upside was capped at that level, while the S&P 500 went on to have an almost 22% increase.

Given the rocky start of the year and the uncertainty the world is facing, we would expect volatility to continue being an important driver in 2020.

Investing in a strategy that seeks to harness this volatility in its favor, like PUTW, could complement your portfolio.

Unless otherwise stated, data sources are WisdomTree and Cboe, as of 3/31/20.

There are risks associated with investing, including possible loss of principal. The Fund will invest in derivatives, including S&P 500 Index put options (“SPX Puts”). Derivative investments can be volatile, and these investments may be less liquid than securities, and more sensitive to the effects of varied economic conditions. The value of the SPX Puts in which the Fund invests is partly based on the volatility used by market participants to price such options (i.e., implied volatility). The options’ values are partly based on the volatility used by dealers to price such options, so increases in the implied volatility of such options will cause the value of such options to increase, which will result in a corresponding increase in the liabilities of the Fund and a decrease in the Fund’s NAV. Options may be subject to volatile swings in price influenced by changes in the value of the underlying instrument. The potential return to the Fund is limited to the amount of option premiums it receives; however, the Fund can potentially lose up to the entire strike price of each option it sells. Due to the investment strategy of the Fund, it may make higher capital gain distributions than other ETFs. Please read the Fund’s prospectus for specific details regarding the Fund’s risk profile.

Alejandro Saltiel joined WisdomTree in May 2017 as part of the Quantitative Research team. Alejandro oversees the firm’s passive indexes and is involved in the design and analysis of new and existing strategies. Alejandro leads the quantitative analysis efforts across equities and alternatives and contributes to the firm’s website tools and model portfolio infrastructure. Prior to joining WisdomTree, Alejandro worked at HSBC Asset Management’s Mexico City office as Portfolio Manager for multi-asset mutual funds. Alejandro received his Master’s in Financial Engineering degree from Columbia University in 2017 and a Bachelor’s in Engineering degree from the Instituto Tecnológico Autónomo de México (ITAM) in 2010. He is a holder of the Chartered Financial Analyst designation.