You Got to Know When to Hold ‘Em 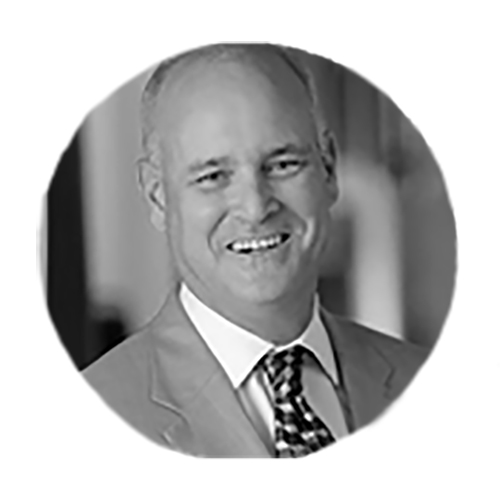 Country music lost an icon recently when Kenny Rogers passed away from natural causes at the age of 81. Rogers is most famous for his song The Gambler. These lyrics are especially well-known:

If you’re gonna play the game, boy
You gotta learn to play it right

The past several weeks have, no doubt, caused or tempted many investors to fold ‘em and run. But is that the best course of action?

Certainly, many investors learn somewhat abruptly that their risk tolerance is not nearly as high as they think until there actually is risk. Perhaps there is wisdom in the military expression, “discretion is the better part of valor.”

But we’ve been through this before, most recently in the fourth quarter of 2018 and, before that, the global financial crisis of 2008. Yes, the causes of the current market decline are different. In this case, the decline is largely self-inflicted, as the global pandemic and corresponding massive social and policy response have effectively shut down many parts of the global economy. The rapidity of this decline is also unprecedented.

However, the monetary and fiscal responses have been remarkably similar—especially now that Congress finally passed its highly anticipated fiscal stimulus bill.

So what is the right course of action? Should we hold ‘em or should we fold ‘em?

To answer this question, historical perspective is helpful. Consider the following chart, illustrating equity performance over the most recent 11-year bull market—note the frequent periods of painful (but ultimately temporary) disruption. 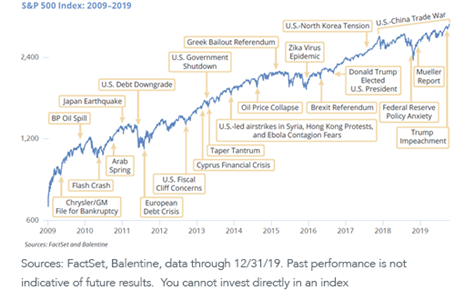 What you see are periodic performance dips (though not of the same magnitude as the current one), followed by recoveries. While the past is not a predictor of the future, it is always helpful in stressful periods to extend your time horizon.

It is also useful to keep the current market decline in perspective, in terms of order of magnitude. Yes, it has been awful, but, as a function of how much the market has rallied over the past 11 years, we’ve experienced worse. 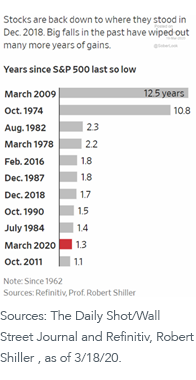 A different way of illustrating this same point is to compare the current decline to historical bear markets. As we see, the current one is larger than the median, but nowhere near the levels of other historical declines. 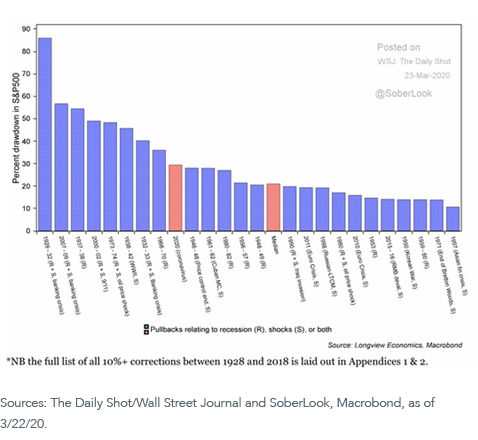 Renowned investor Warren Buffett is credited with saying, “Be fearful when others are greedy and greedy when others are fearful.” What he meant was that the most disruptive of market periods often represent the most attractive times to buy.

The following chart illustrates the typical investor sentiment cycle, with the arrow indicating where we believe we might be currently: 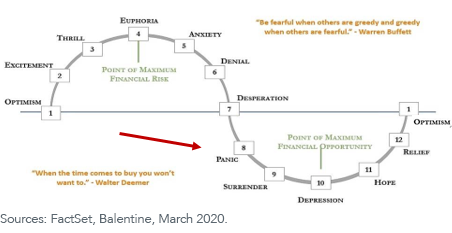 A more humorous version of this chart first appeared anonymously in the early days of the Internet following the 2000 tech bubble crash (along with our indication of where we might be now on this mental/behavioral roller-coaster): 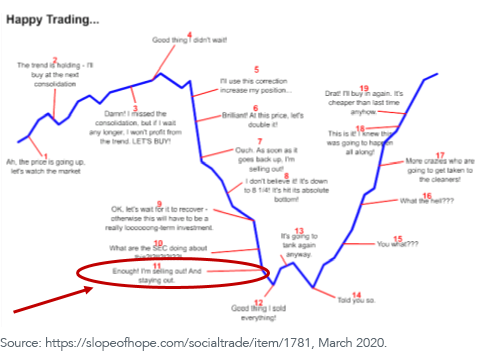 1. A sharp increase in the CBOE Equity Put/Call Ratio, indicating that more investors are seeking downside protection than upside potential: 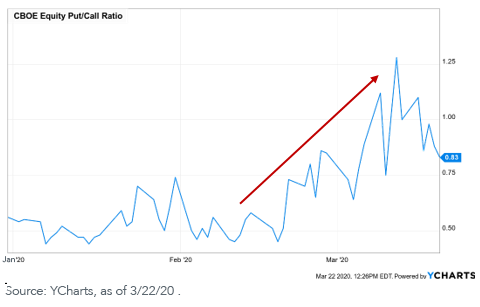 2. A decline in the American Association of Individual Investors (AAII) Investor Sentiment Survey: 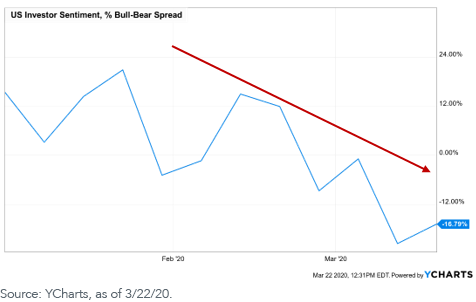 3. A decline in the National Association of Active Investment Managers (NAAIM) Exposure Index, which has fallen to levels not seen since 2016: 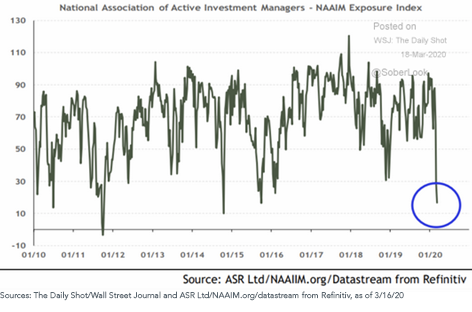 4. And a sharp decline in the Deutsche Bank portfolio equity positioning metric: 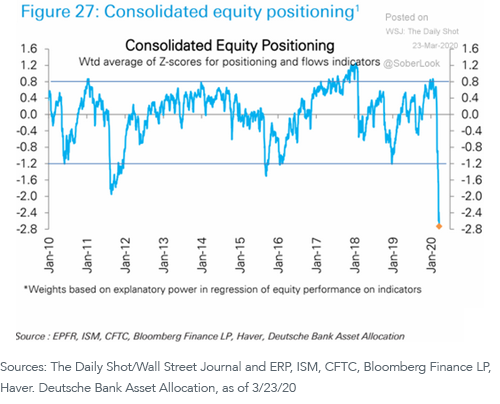 This is not to suggest that investors are wrong to be concerned or that they should not be considering more defensive portfolio positionings. Nor are we suggesting that the market cannot or will not decline further from here—it certainly could and might.

But if you believe, like we do, that this terrible period will eventually pass and that markets will recover, then now is an excellent time to at least begin planning to “lean back in” to the markets in anticipation of an eventual turning point.

In this current environment of social distancing and either self-imposed or government-mandated shelter-in-place quarantining, it may be that what is going through many investors’ minds are the lyrics to Jimmy Buffett’s Boat Drinks:

This morning, I shot six holes in my freezer
I think I’ve got cabin fever
Somebody sound the alarm

It’s a timely and fun song, but we encourage investors to extend their time horizons, plan for re-engaging with the markets, look for attractive re-entry points and keep the lyrics of a different song in mind—Adam Lambert’s Whataya Want from Me:

Just don’t give up
I’m workin’ it out
Please don’t give in
I won’t let you down
It messed me up, need a second to breathe
Just keep coming around.