The International Monetary Fund (IMF) has been predicting India to grow solidly above 7% for the foreseeable future. Despite some recent transient weakness, we think India is very well positioned to continue its impressive growth.

Several recent measures to boost the economy point to a political willingness to support India’s growth. After an unprecedented rate cut, India’s government, in a big boost to “India Inc.,” just announced corporate tax cuts of 8% to 15%.1 My analysis below breaks down what this tax cut means for different sectors and how investors  might benefit.

Scale of Tax Cuts and the Reasoning Behind Them

On September 20, the finance minister of India announced an unprecedented cut in corporate taxes, bringing them down from 35% to 25% in most cases and from 30% to 22% in some cases.1 With an approximate total tax revenue of around $100 billion, that’s a drop in government revenue of about $20.5 billion. 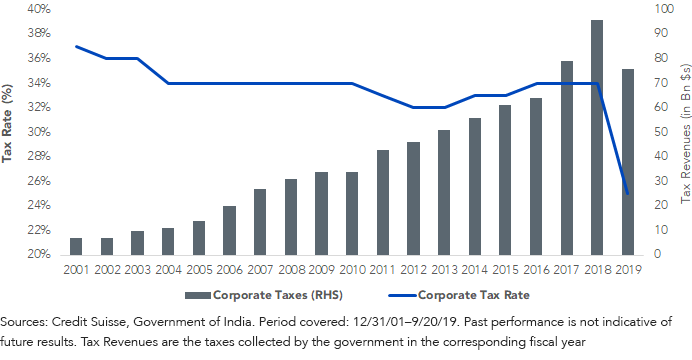 This step reflects policy making in India that responds fast to changing domestic and international environments. Back-to-back reforms that were focused on streamlining taxes caused stress for manufacturers and distributors, and weakening credit growth has affected consumer spending. This has been reflected in weakening sales of automobiles and consumer goods. Thus, it was necessary for government to provide a fiscal boost in addition to the monetary boost provided by the Reserve Bank of India (RBI) in August.

Beyond domestic reasons, the tax cut? was made to help incentivize global manufacturing companies to hedge against the effects of the volatile U.S.-China trade dispute. Early this year, Apple2 announced that it was shifting some of its manufacturing from China to India, and other companies are also shopping around.

The figure below shows that over the last two decades India has had higher tax rates when compared with China, Malaysia, Vietnam, Thailand and other potential manufacturing hubs in Asia. This put India at a relative disadvantage for companies that were considering moving out of China because of the recent U.S.-China trade war. Thus, current cuts by India are much welcome and, in my opinion, aimed at giving companies an incentive to move to India. Breaking down India’s tax collection by sector, the Energy and Financials sectors are among the larger tax-paying sectors, and therefore companies in those sectors stand to benefit the most.

This is a shot in the arm for public sector banks that have been reeling from nonperforming assets. This may also help the Energy sector, leading to potentially higher industrial utilization and increased investment activity. Extra cash can help corporate companies  deleverage and improve their profitability, margins and return on assets (ROA). The WisdomTree India Earnings Fund (EPI) screens for profitable companies and then weights by net earnings. This market cap-agnostic weighting methodology leads to a diversified exposure across large-, mid- and small-cap companies with relatively inexpensive valuations. Relative to the MSCI India Index, this leads to the following:

Recently, we also launched the WisdomTree India ex-State-Owned Enterprises Fund (IXSE), a continuation of our very successful ex-state-owned product family. This methodology screens and selects only companies with less than 20% ownership by the government. Relative to MSCI India Index, this leads to the following:

We believe that in this challenging investment landscape filled with geopolitical tensions, India could be an oasis of growth. It went through its election cycle, with the government led by Prime Minister Narendra Modi coming back to power for another five years in May 2019. This removed much of the political instability, which combined with the resolve that the Modi government showed in listening to industry in its first term indicates a period of decisive policy making ahead. The current fiscal boost is another shot in a series of measures fired by policy makers in India to help ensure its solid growth.

We believe reforms and growth are going to be the story ahead. Trumping most other markets, India is well positioned to outshine.

1Companies in different sectors fall in different tax brackets in India. The tax structure of a firm in the Financials sector is very different from a firm in the Technology sector. With the new cuts depending on which sector a firm falls in and what existing cess (levy) /rebates were already applied to the firm, tax rates can fall from 35% to 25% or from 30% to 22%.

2Neither IXSE or EPI hold Apple.

There are risks associated with investing, including the possible loss of principal. Foreign investing involves special risks, such as risk of loss from currency fluctuation or political or economic uncertainty; these may be enhanced in emerging, offshore or frontier markets such as India. These Funds focus their investments in India, thereby increasing the impact of events and developments associated with the region, which can adversely affect performance. Investments in emerging, offshore or frontier markets such as India are generally less liquid and less efficient than investments in developed markets and are subject to additional risks, such as risks of adverse governmental regulation and intervention or political developmentsAs these Funds have a high concentration in some sectors, the Funds can be adversely affected by changes in those sectors. Due to the investment strategy of these Funds, they may make higher capital gain distributions than other ETFs. Funds focusing their investments on certain sectors and/or regions increase their vulnerability to any single economic or regulatory development. This may result in greater share price volatility. These Funds invest in the securities included in, or representative of, their Index regardless of their investment merit and the Funds do not attempt to outperform their Index or take defensive positions in declining markets. Please read each Fund’s prospectus for specific details regarding the Funds’ risk profile.

Neither WisdomTree Investments, Inc., nor its affiliates, nor Foreside Fund Services, LLC, or its affiliates provide tax advice. All references to tax matters or information provided on this site are for illustrative purposes only and should not be considered tax advice and cannot be used for the purpose of avoiding tax penalties. Investors seeking tax advice should consult an independent tax advisor.

Gaurav Sinha
Associate Director, Asset Allocation and Modern Alpha
Gaurav Sinha is currently working as Asset Allocation Strategist at WisdomTree since November 2014. He is leading the Portfolio Analytics and Solutions team and builds specialized investment solutions along with customized analytics for our clients. He is also deeply involved in advancing WisdomTree’s product suite, and has particular expertise on India. Gaurav came to WisdomTree after stints at World Bank, Morgan Stanley and recently with Windhaven Investment Management. He received his Masters in Financial Engineering from Columbia University in 2009 and holds a bachelors Engineering degree from the prestigious Indian Institute Of Technology (IIT).