European equities have really been out of favor. Flows to European stocks dried up in 2017 and 2018 as the S&P 500 Index was the best (only) game in town, powered by the large-cap technology companies that Europe frankly lacks.

But new leadership at the European Central Bank (ECB) is motivating a fresh look at the policy tools available for the central bank, and WisdomTree believes European markets will find support over the coming 12 to 18 months.

What is the best exposure to Europe for a more bullish view?

In a previous blog post, we highlighted how European multi-nationals in the WisdomTree Europe Hedged Equity Fund (HEDJ) neutralize exposure to the euro  while also under-weighting banks, which have been stung by slow economic growth and negative interest rates.

Over the last seven years (the start of which coincides with the repositioning of HEDJ to focus on euro-traded companies), small-cap European companies have outperformed large-caps, as represented by the MSCI Europe Index, by approximately 500 basis points (bps) per year—a dramatic spread. The beginning of this period also coincides with Mario Draghi’s famous speech in which he said that the ECB would do “whatever it takes” to support the eurozone, which helped ignite risk assets higher.

DFE exhibits higher beta and risk levels than HEDJ, because small-caps are more closely tied into the local and cyclical part of Europe’s economy. However, the 50/50 barbell with HEDJ interestingly had lower overall volatility than the broad MSCI Europe Index and a .92 beta to MSCI Europe but 470 basis points of average annual outperformance.

For standardized performance of each Fund mentioned in the table, please click their respective tickers: HEDJ, DFE.

With growth in Europe having been slow over the last seven years, why did small-caps outperform large-caps by so much—particularly during a time when small-caps had dreadful performance in the U.S.?

Going back 10 years in Europe, small-caps had more technology exposure than large-caps—about 3x as much, on average. Technology contributed over 100 of the 500 bps of DFE’s outperformance relative to the MSCI Europe Index.

More exposure to Industrials as well as the better performance of those stocks was another key contributing factor—demonstrating how cyclical improvement can help this basket in the future.

While the historical returns of the WisdomTree European Barbell present a very compelling case for the past seven years, what about its future prospects? 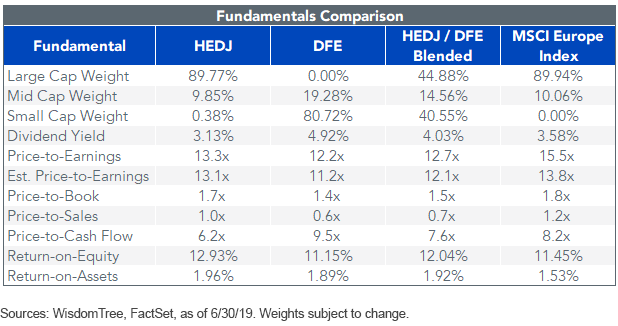 Historical outperformance did not lead to extended multiples, causing fear of mean reversion.

Due to WisdomTree’s dividend-weighted, relative value rebalancing process, the WisdomTree European Barbell maintains a strong value tilt and advantage at the present time.

We emphasize the current 12–13x price-to-earnings (P/E) ratios of both HEDJ and DFE, compared to 15.5x for MSCI Europe.

Even better, these discounts do not come with a sacrifice in overall portfolio quality metrics—the WisdomTree European Barbell exhibits both a higher return on equity (ROE) and return on assets (ROA) compared to the MSCI Europe Index.

There are risks associated with investing, including the possible loss of principal. Foreign investing involves special risks, such as risk of loss from currency fluctuation or political or economic uncertainty. Funds focusing their investments on certain sectors and/or smaller companies increase their vulnerability to any single economic or regulatory development. Investments in currency involve additional special risks, such as credit risk and interest rate fluctuations. Derivative investments can be volatile, and these investments may be less liquid than other securities, and more sensitive to the effect of varied economic conditions. As these Funds can have a high concentration in some issuers, the Funds can be adversely impacted by changes affecting those issuers. Due to the investment strategy of these Funds they may make higher capital gain distributions than other ETFs. Please read each Fund’s prospectus for specific details regarding the Fund’s risk profile.